So I’ve read lots of comments on leather cutting about fumes from chrome tanned leather. I did not read into this topic until I started to get concerned about the fumes and how they seemed to be making my throat scratchy and my lungs a little iffy. I am well ventilated to the outside. So my question is, do I just give up on all this wonderfully colorful and diverse leather that makes amazing earrings?!?! I’m willing to purchase an air purifier and an air mask to wear while cutting, has anyone does this and been successful in preventing your lungs from feeling cruddy? I really don’t want to stop selling these awesome products but I don’t want to sacrifice my health either. Some threads said that the laser would not cut this type of leather well but I’ve had nothing but success with it. This is not pleather or fake leather, I know those are no no’s, but just dyed and printed genuine leather. Just wondering if there’s any experts out there that can give me peace of mind that taking some precautions will fix the problem

Had you given any thought to veg-tanned? If I was feeling the effects, ventilation system or not, I believe I’d switch. (I’ve cut veg-tanned without any ill effects, other than temporary stinky.)

Do they have as many cool colors and printed patterns? I haven’t done a ton of research on veg tanned. Where do you purchase yours? Thanks!

I think you can get it anywhere they sell leather. It looks just like other leather, but it’s safer for use in lasers. I wouldn’t try to laser chrome tanned.

Just specify “vegetable tanned” or “veg tanned” when you go to leather sites in the search.

There are LOADS of sources to buy leathers–The Leather Guy is a good site, as well as lots of shops on eBay & even Etsy. (I don’t like Tandy for leather, but great for tools & supplies).

If you’re already noticing issues with chrome tanned, the air purifier likely won’t help much. But you can also always dye, as already suggested, or use leather paints (after cutting/etching).

I use a mix of leathers for my projects–more oil tanned than veg tanned, and a few are chrome tanned, but I don’t do much on the GF at any one time… and mostly etching, not cutting. I also avoid doing so when the wind is likely to blow the exhaust back towards my house/open windows.

Why would an air purifier not help? I shouldn’t have ever started, now I don’t know how to stop! 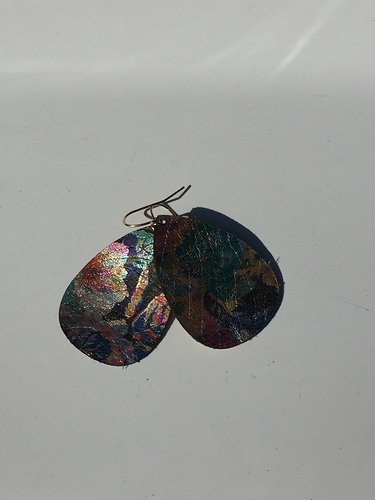 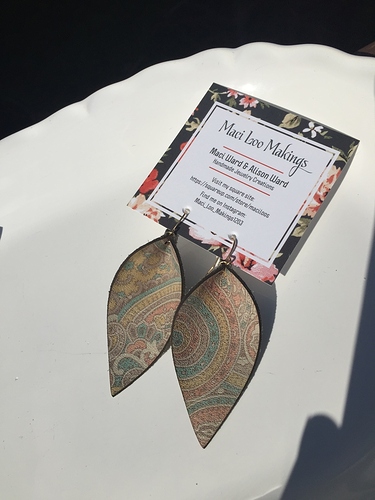 I would have a hard time giving that up, too!

I think the point is that your lungs are already getting upset with just the amount of zapping products left in the air inside the case and then getting into the room. So you’d need really serious filtration/ventilation of the room to get rid of that. (This link, although for much more serious applications, explains the problem: if it goes past your mouth and nose on the way to the filter, you’ve already got issues.) Maybe some kind of ventilation that sits right in front of the gf door when it first opens?

Gotcha, good point. I was thinking of wearing a ventilation mask as well. . . ugh probably not worth the risk I guess.

A lot of different chemicals and particulates are being released by the laser. Most are being vented outside. Some of what remains is irritating your throat. If the lining of your respiratory track is reacting negatively to the fumes, all you can do is purify them out of the air or wear a mask that does the same.

When I did the math, the amount of hexavalent chromium that could be released by the glowforge, was well under the allowable exposure limits for hexavalent chromium as defined by OSHA. I could have made a mistake in my math, but the fumes released in welding and the ones coming from your glowforge aren’t very similar. This, however, is a moot point if something else being released is making you miserable.

Thank you! I am not a chemist or remotely scientific minded, so I had no idea as to the severity of the amount of bad stuff coming out. I think I’ll try a mask and a purifier and see how it goes. So as far as you think the chrome tanned leather won’t hurt the GF, correct? From all I’ve read other places seems like PVC is a no no but chrome is only bad for us humans, not the actual machine. . . again thanks for the input.

I could have made a mistake in my math, but the fumes released in welding and the ones coming from your glowforge aren’t very similar.

True. I wear a welding respirator for welding and also for CNC plasma cutting. Even with a water table to trap a lot of the particulates, welding shakes are not pleasant so respirator on. For the laser, no issue.

PVC and anything with a chlorine component is bad for the insides of the machine. I don’t consider the amount of hexavalent chromium released by the laser to be an issue, particularly if vented or filtered. Who knows what compounds are being generated by the dyes and any other treatments made to the leather you use.

There is at least one study of poor Indians who live next to tanneries (India is a major producer of leather) and burn the leather scraps for cooking fuel. Among many issues I am sure they have is breathing in too much hexavalent chromium.

IF there is any. Trivalent chromium is more likely and much less of a concern than CrVI.

You could give up lasering them and use a cricut or a brother cutting system. The operation is very similar, but since you are using a blade rather than burning them, your lung should be okay.

We use all kinds of scrap leather (eBay) for custom coasters at two of our cocktail bars. The trick was to soak the leather in water then press water out with a towel. Leaves the leather saturated damp but not soaked. Then play with settings. Haven’t found a leather that hasn’t worked yet. Even the NOS 1970’s Corvette metallic leathers.