I like Inkscape for the most part. There are issues with the X11 environment and OSX on dual monitors. Getting used to CTRL instead of CMD is also weird.

Other issues I have are fence creation of rectangles and circles. I always want to draw more like CAD applications. I sometimes design in F360 then export as DXF to finish the illustration in Inkscape. Not being able to quickly extend a line to an object, or draw parallel or angled lines quickly drives me batty.

THIS[quote=“mad_macs, post:23, topic:76”]
Not being able to quickly extend a line to an object, or draw parallel or angled lines quickly drives me batty.
[/quote]

This is the crux of why I have so much issues with F360. I learned on Sketchup and it’s just so easy to create a non-standard shape (i.e. turn a square into a trapezoid) by adding a few lines exactly where you want them. Or to create an angled surface. It is absolutely not intuitive on F360.

It’s not that I don’t want to learn F360, I can make a simple box, thanks to the tutorials posted here, but I can’t do anything “worthwhile” yet. I can’t “heal” a surface by deleting extra lines. (i.e. create a trapezoid by putting in a square and a triangle, and then trying to delete the adjoining line so I’m left with a trapezoid is just not possible)

that’s how I felt when I first started using illustrator again a few years ago (using CS5.5), and I almost gave up on it. I was pushed to keep messing with it, and after a little while I started seeing a lot more similarities between PS and AI than I had at first. Moving to the CC versions, even more so.
one note: Creating custom workspaces in both apps (with similar tools in similar places) went a long way.

Did you find a good alternative that works?
Let me know

I cannot speak for @chummymonkey, who has not posted in almost 3 years but, a number of us have had good luck using polyester sticker stock. Here is my previous redux on the topic with links to assorted discussions:

Cutting Stickers and Decals Beyond the Manual

Previously: My settings for the Online Labels polyester sticker stock: 195/3 – Cut sticker but, not backing. 195/9 – Cut sticker and backing.

Sorry for the slow reply. Been having some sewer issues.

Yes I have found a material that works. I got if from here https://jotoimagingsupplies.ca/cuttable-one-4-all.html . It is meant for sublimation t-shirts. It laser cuts with almost no odour compared to regular sign vinyls. We use it on the industrial lasers at my work place. I would still use caution as the description is still a vinyl product and vinyl off gas is toxic. Maybe Evermorians product is a safer bet.

It says that One-4-All* stuff is polyurethane, which should be safe to laser. I would still want to look at a MSDS first to be sure it is chlorine-free and, has no other corrosive combustion products.

Heat-transfer vinyl is probably not what one wants for making stickers. The polyester film I mentioned will be better for stickers.

There are a couple well-tested options for heat-transfer “vinyl”: LaserFlex and Siser EasyWeed. More here:

I ordered some LaserFlex awhile back to make a T-shirt for someone. I had an idea for another shirt but, an optimal color was not really available. Later, I learned about Siser EasyWeed, which is available in a lot more colors. With some of both on-hand, I tried both back-to-back. Both seem to be workable with minor differences. Ironically, the LaserFlex was easier to weed than the EasyWeed. That may have partially been due to where I settled with the settings. Conveniently, I had an old h…

*Wondering if they have another product called All-Might.

What would you use for vinyl used on metals or glass?

@cbsaint Remember the Glowforge isn’t necessarily always your best tool. When I want to use vinyl for metals or glass I use Oracle 651 that I cut on my Silhouette Cameo. I feel a vinyl plotter/cutter is a much better tool for that job than a laser.

I have been almost exclusively cutting 2-5mm plywood of all different qualities and types for over 2 years and hundreds of intricate pieces with no ill effects. Of course the resins make it so you have to wipe things down every 6 months with solvent, but that is no big deal. One thing i do that saves some time is coat the front panel with wide masking tape, which is where the resin builds up the most. That allows me to just peel it off and add a new layer when it gets grody. Some cheap plywoods have lots of voids that are filled with a filler that does not cut. You can do test cuts on the side of the panel to see where the filler is. Sometimes a panel has too much and I just junk it. 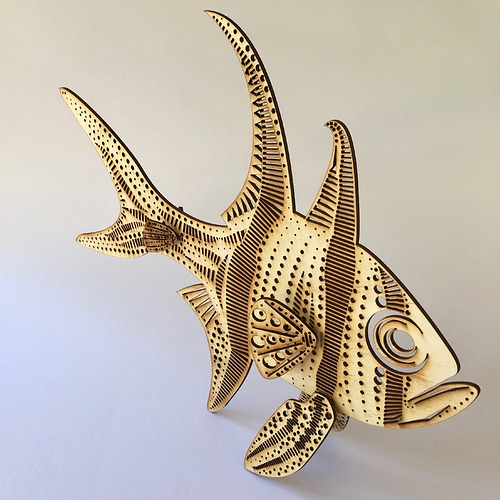 This is a good source. thanks for this post. i found another study done on PVC with some more relevant information. Listed below. It should be noted that the discussion below is related to significant amounts of PVC being burned in building fires. much less the small amount being burned in the laser. Also, a common mistake I see is people saying that chlorine gas(Cl2) is produced when it is actually (HCl). HCl is corrosive but not toxic in the way Cl2 is. for reference, Muriatic Acid (dilute HCl) is sold at Lowes and Home Depot and is used to clean brick and concrete.

As for questions about whether PVC generates combustion gas, the same study found that:
• PVC generates hydrogen chloride in combustion, but the generation of carbon dioxide and carbon
monoxide is proportionally reduced, and is slightly less
than wood.
• PVC doesn’t generate toxic hydrogen cyanide
and aldehyde compounds.
• Hydrogen chloride is not as anesthetic as
carbon monoxide. Additionally, hydrogen chloride serves
to provide an escape signal with its pungent odor.
When PVC does combust, its contribution of toxins is
“insignificant,” according to third-party organizations that
have conducted research on the combustion toxicity of
vinyl products. According to the Vinyl Institute, “most fire
scientists recognize that the largest hazard in a fire is carbon monoxide… The mix of gases produced when vinyl
products burn, including hydrogen chloride, is very similar
in terms of combustion toxicity to those of other common
building materials when they burn.” Though hydrogen
chloride is an irritant gas, it is nowhere near as dangerous
as the chemical dioxin or carbon monoxide, the release of
which is often, and wrongly, attributed to vinyl.

The problem is that is looking at toxicity to humans (or animals in general I guess, but why are you letting your cat use your laser?). Anyway what it doesn’t look at is “toxicity” to the laser cutter. HCL will corrode your laser optics and electronics in a hurry. A tiny amount of HCl gas isn’t that toxic (I mean we’ve all burped, and every night when we sleep we all aspirate a tiny amount of concentrated HCl from our stomachs). But we evolved to survive that. Glowforge did not design the guts of the laser to survive a highly corrosive atmosphere (I’m sure there are lasers that are designed for that, for some special industrial use, but they are unlikely desktop consumer models)

Just got my glow forge, can I make ear savers out of vinyl? Will it work!? The acrylic ones snap easy.

Vinyl should never be cut in the Glowforge. It will ruin the machine. What material, exactly, are you asking about.

There are some laserable rubber like materials (mostly for making stamps) but they have to be labeled as laser safe or you will destroy the laser. Also if your ear savers are snapping you may need to bowl-melt them in the oven so they match your head curve. (There are forum posts on bowl-melting the earsavers)

thanks for the information.
my next question is how can i engrave kitchen knives , or metal inparticular"?

You will need a marking agent such as Cermark. Metal cannot be engraved, only marked. Use the search function of this forum. Lots of posts about metal, knives, etc.