The knife blade dips down so I assume the focal point made it not laser that part. Same goes for the kitchen knife, it was propped up but apparently not level. Something to work on… 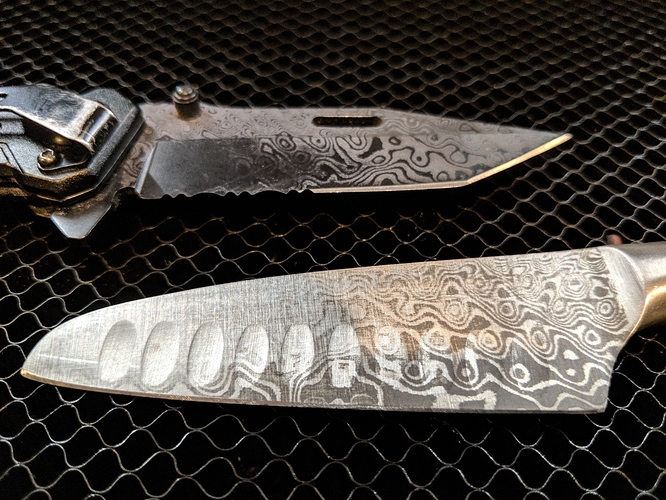 I though the cameras can detect curves and levels? Or was the introduction video fake?

That’s beautiful! The pattern and color are striking. I get that the (unintentional) fade out is not what you were going for, but it’s a cool effect IMO.

Beautiful effect. (Looks just like the ones I paid for.)

I though the cameras can detect curves and levels?

That part of the software has not been released yet.

Or was the introduction video fake?

Not fake, just hasn’t been fully implemented yet.

Thank God I was hoping I was wrong

Fantastic, can I ask how you prepped the steel first, and if and how you used a jig so you get and edge to edge cut?

Alcohol wipes to clean the metal and then there light coats of Dry Moly Lube. As far as a jig, I just used some cardboard to prop up the blade so it sat somewhat level. I used Photoshop to skew the image shape to somewhat fit the blade and let it run over a little in all directions.

It actually does curves quite well. I ran a test earlier ( Testing curved thick material ) using 2" round stock.

Very cool Kyle! I just received my Glowforge! I look forward to combining crafts and passions. Its hard to explain to people just what a Glowforge can do. Sometimes it is best to just show them. If it doesn’t move too fast, and it fits in my Glowforge, then it is fair game!!

Thank you, it was fun to do. Next I’ll go slower so it sticks. So far the burned on Dry Moly Lube has come off partially.