So I had this idea for a while and finally got to it: an extension spacer for the lens so that you could engrave/score (or cut) the inside of a tray up to about 1” deep.

Normally you are limited to trays no more than 0.5” deep because of the limited focal sweet spot of the Glowforge, but if you physically move the lens down and lie to the Glowforge about the height of your material, it will happily do the job.

Here’s a quick makeshift “tray” that’s about 0.75" deep, a really shallow cardboard box bottom. The spacer can be seen in the tray, and I scored a star in the tray base at perfect focus. 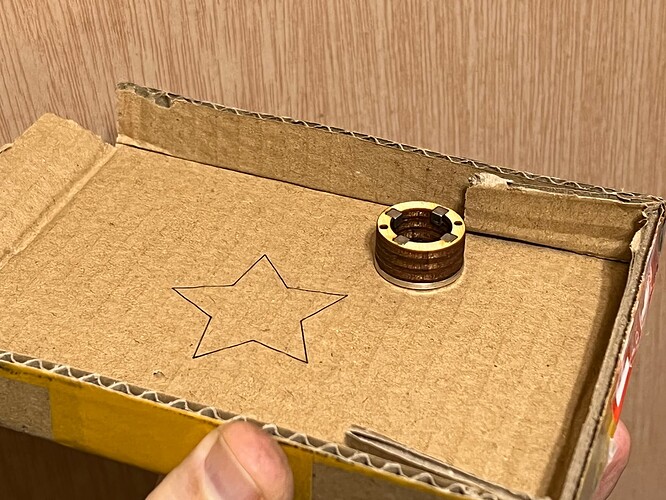 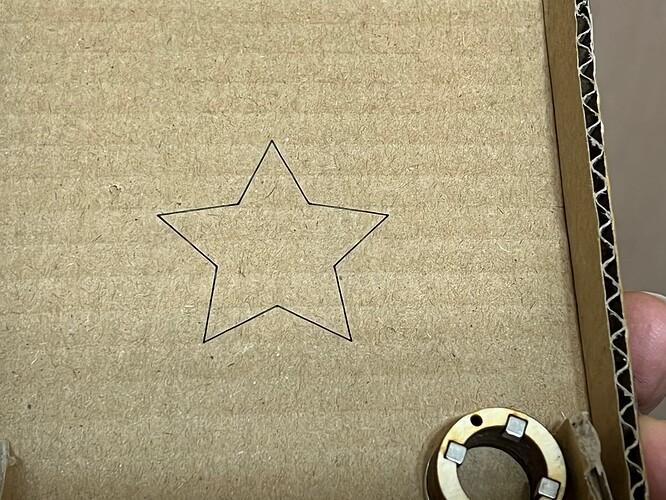 There are two main caveats here.
One is that you’ll be blocking the tiny fan that blows across the lens. I don’t know if that will have any real consequence, in theory it might mean that the lens will get dirtier than usual.

Two is that you really want this to be as light as possible, the lens height adjuster is probably not the strongest little assembly. This is three layers of BB with 4 tiny magnets to hold it inside the laser head and one lens remover tool magnet (you can see it on the bottom of the spacer) to hold the lens onto the new extender. I think this may be right on the limit of being too heavy – if I were really serious about this I might try 3d printing one, it would be far lighter than this prototype. I could also probably remove about 50% of the wood material just be redesigning it to have thinner walls. I was in a hurry and just wanted to finally get this idea off my chest.

In theory you could get more depth out of it, I did some back of the napkin math and came up with about 1.5" of play. I wouldn’t push that limit, if your lens assembly catches on your material bad things will happen.

Anyway If Glowforge would simply release a deep focus lens that focuses at the base of the Glowforge instead of tray height, this entire project wouldn’t be necessary. You could engrave the bottom of trays up to 2" or so tall at that point… but that idea was thrown into the hopper hole and we’ll probably never see it.

I feel better now, this one has been bugging me for a couple years. Thanks for reading and taking this idea off my brain.

What a great idea! I was just trying to do that yesterday (engrave a tray deeper than .5") and couldn’t and gave up.

To be clear (cuz I’m visual like that) is this how that works? 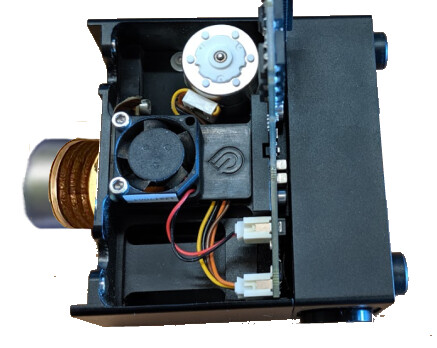 Yeah. You take out the lens, slide the spacer in, small
magnets first… it snaps into place where the lens would be. Then you snap the lens to the spacer.

Now your lens is about 0.47” lower than usual which means you will now be able to focus up to 0.47”
below the honeycomb height.

There is a little bit of math to be done to figure out the new material height but it’s no harder than any other “no tray” operation.

The fan at Issue I think is the one at the back of the carriage. It does a lot more than just blow the smoke you see out of the way, but it also blows out that little candle flame you sometimes get while cutting. As I learned the very hard way any time it shows up the cut will not be as deep and depending on the material, may ignite the whole thing. It would of course still have air pass but I would guess less strongly at the cut location where it is often iffy at best normally.

The fan at Issue

Nope, that’s the air assist. This doesn’t block the air scoop at all.

This is the teeny one directly on the back of the head. It’s about half an inch across. 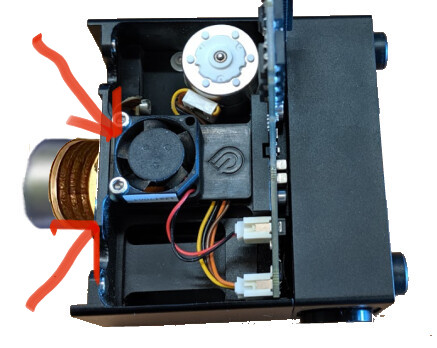 This fan pushes air into the lens channel, I believe to keep debris off of the lens.

That was why I was specific about the Carriage Fan. I also did just clean all the lenses this morning and was amazed at how bad the mirror was. I hadn’t realized how much smoke got to it, so that might be an issue. However, the air scoop would send the moving air over the point of cutting rather than across it when it has issues with moving the air properly at the best of circumstances.

Wow, what a cool idea! I think that could be very useful, although I’m not sure I have the guts to try it. Depends on if I come up with a project that could really use it. I would think personalizing store bought items like bowls and trays would be a big one.

Do we know the diameter of the lens? If it’s 18mm or 20mm I gotta wonder if standard lenses could be made to work with the glowforge by creating that “cup”. I have a 20mm 2" focal length lens here for the still to-be-delivered chinese laser I have on the way. They are a little expensive to be experimenting with but might be worth it. 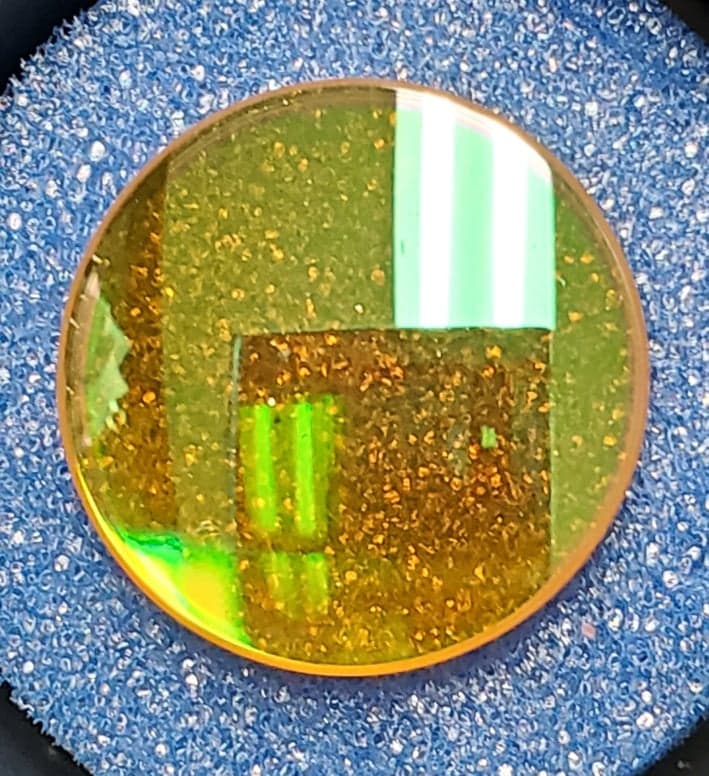 Interesting. That shop supplies third party lens, mirror, and windows for the GF. At prices slightly less than the GF spare parts shop. 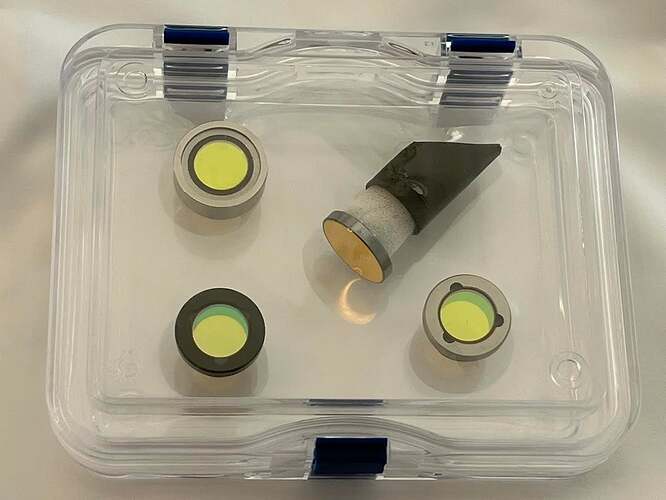 Either bundle or individual parts.

They’re good or better than OEM too. 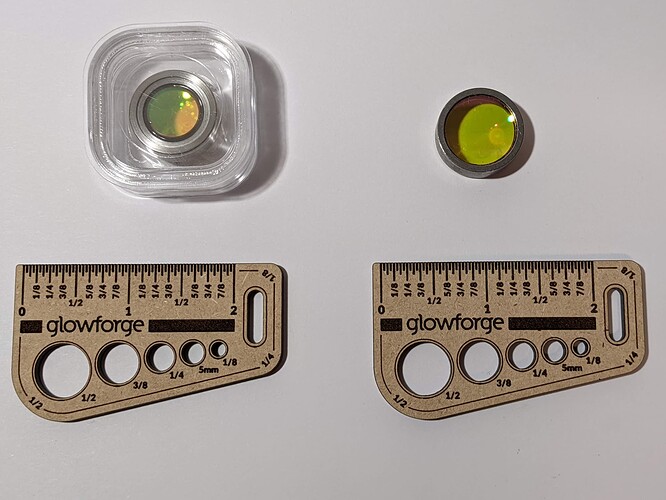 I knew they sold the lens but it was a surprise to me that they sell both the windows and now the head mirror.

I debated experimenting with a 1.5” lens. Getting a custom holder made that basically extends the lens down. Do it a half inch and you wouldn’t need to change the focal height at all - as long as it didn’t stick out and get in the way of the head camera.

It could be done basically the same exact way you’ve done this. But, sounds like the attempt would have failed it I had it machine, due to weight. 3D printing is an interesting idea. And a cheap way to iterate.

Neat! Perhaps balsa wood would be a good option for reducing weight.

Hmm you know I do have some balsa in a drawer. Where were you a day or two ago?

i had to read this 2-3 times, thinking, “i did what?” until i realized i wasn’t reading the word “this” in there.

Wow wow wow. Extending the use of the Glowforge yet again!