Yes, I know this has been discussed previously, but there are always new eyes combing the forum that aren’t aware of a specific term. Anyway, for those who do not know about nesting, it’s just placing your files in a way that will can save both time and material. I used to be a bit OCD when placing items in a batch project, but this can cause there to be empty space between these items that could be better utilized. It can be important to be aware of the grain or material you’re using when designing, but when these things aren’t particularly important, nesting is a great way to go.

With that out of the way, I typically do it by eye, but my brain isn’t as intelligent as an AI that is designed to do the same work a thousand times over (go figure). Deepnest is a great solution, you upload your design, within the app itself you create a “sheet” or artboard, adjust how many copies of each item in your file you’d like, “select all” then hit start nest. I’d also suggest going into settings to set some parameters for the program to follow, such as the space you’d like between pieces and whether material or time is more important to conserve. It takes a little while to get some really good results if you’re planning on using a full sheet, but I’ve used it as a good template to manually move the pieces in the original file. I’ve read that others have had scaling problems, so manually placing them instead of exporting its version fixes any possible issue.

I’m posting this now because I had used Deepnest yesterday, and after having it determine a decent nest for me, I forgot to quit out of the program. It’s been running for the last 20 hours or so

I mean, once it gets a good one, there isn’t really a reason to let it keep going, just gotta remember to stop the nest or close out of the program after use! Hope this helps at least one person, new or old, because I know when I figured this out a while back I had thought I had figured out a great solution, only to be told that many people here already knew about it, but hadn’t mentioned it - so here’s a friendly tip from someone who knows about it, and would like to share!

Few pics for those that are visual learners:

This is the home screen, with my added artwork. I created the sheet within the Deepnest app itself, then selected that it was the sheet that I would be using as the bounding. 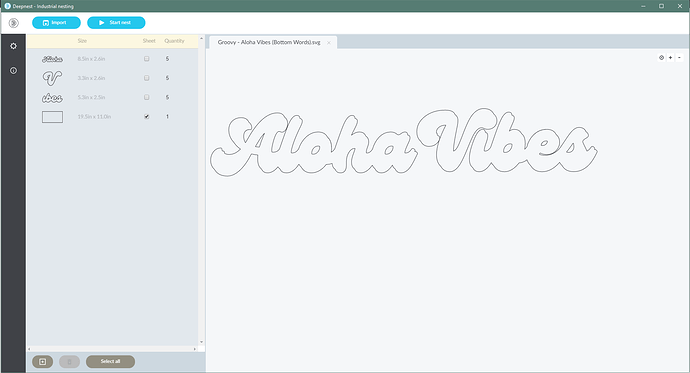 Changed up my settings to make sure that I get what I would like: 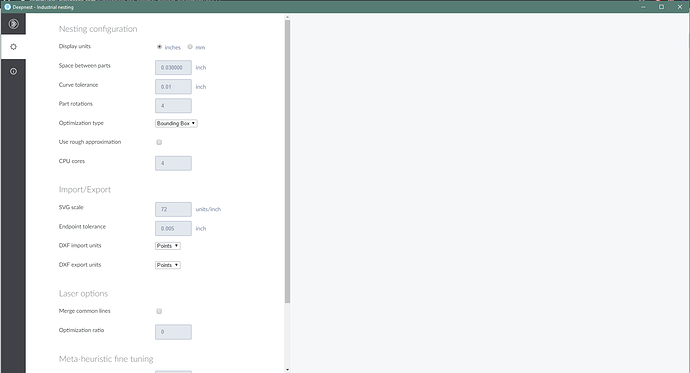 ) these were some of the results. You can scroll through the color graphs on the left to find one you like: 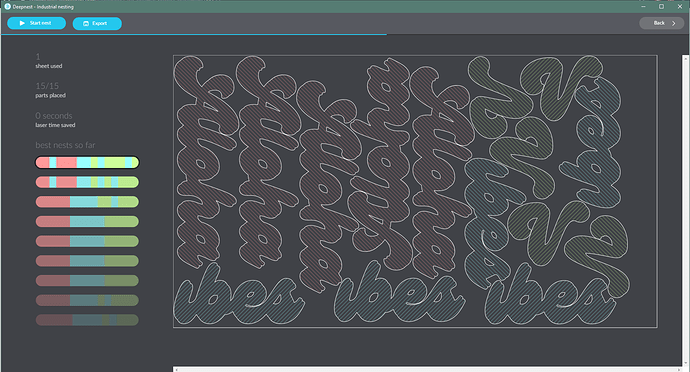 For illustrator, I’m pretty sure that you need to use the export function for it to scale correctly, rather than the save as.

This is good to know, I only ever save them as SVGs, so exporting is a great solution. JB always on top of it!

I use Save As… and select SVG all the time. It’s the only way I do it. I never get any scaling errors. And they’d show up if I did since many of my cuts are “practical”, something mechanical that won’t go together if the tolerances aren’t maintained.

It can be important to be aware of the grain or material you’re using when designing, but when these things aren’t particularly important, nesting is a great way to go.

i just wanted to emphasize this point you made (my emphasis added). sometimes people don’t really think about grain as much until they’ve assembled and someone points it out. so you should always think about grain as you make a product out of wood up front, just to be safe. but plenty of things it doesn’t matter for.

Precisely, glad to have you emphasize it. With my latest projects, I’ve been doing painted MDF, so nesting is a great way to use up all of my sheet. I do find myself eyeing mismatched grains in some projects, mine or otherwise, so definitely a good idea to be aware of that if people are going to be noticing it when you don’t want them to.

With nesting? I always use the save as for a regular project out of illustrator and have never had problems either, but I brought it up because I’ve read some people previously have had problems out of the Deepest files after importing them into illustrator and then saving them, rather than exporting them. Of course, it could also come down to a couple of other variables, so I figured I’d mention it for anybody new using the program as a potential catch.

I use it so infrequently and often have scaling problems going into deepnest despite the resolution being set correctly in the program, that it takes me a few mins to remember which method it likes.

so you should always think about grain as you make a product out of wood up front,

Unless it’s Plywood. In which case the grain is only important for aesthetic reasons. But if it’s hardwood, the grain can be critical for structural integrity.

I let deepnest run long after I have one I can use. Mostly out of curiosity. I also look for the shape of what will be left behind post cut. if all else is equal, I go with the layout that has the coolest leftovers. I tend to set the space between parts to a bigger value so that the leftovers do not crumble. I will lower it to cram in the last few parts if they are not fitting on the sheet.

Untrue for some plywood.

Pick up a sheet of Baltic birch and try bending it, it will always bend more easily on one axis vs the other. I always keep that grain orientation in mind when cutting my BB sheets. It’s key to know the rigid direction when constructing something.