Just finished up some testing on some 1/4" Delrin® from Inventables. To cut on a pro, it was 3 passes at 130 speed and full power. Note that full power on a pro is more than full on a basic. So, slow it down from there on a basic and see what you get. Also note that any other power settings, from 0-100, are the same from basic to pro. I posted my results in the spreadsheet, here. I’d love to post pictures, but my Nexus 5X just succumbed to a manufacturer’s error and died on me.

Thank you for sharing! I have a piece of that awaiting its turn under the zapper.

I haven’t thought of what I might want to make with Delrin … but, I love the product. Really appreciate your tests!

I see in the spreadsheet that you used the white Delrin- I’m wondering if there’s any difference in settings for 1/4" black, as I have some of that lying around. You didn’t happen to get a little of each type to play with, did you?

I do not. There may be a difference, but I suspect it’ll be pretty minimal.

Cool. If nobody else gets to it by the time my Pro arrives, I’ll do some testing.
Sorry to hear about your phone, would have liked some photos of the cut. In lieu of that, anything remarkable about the quality of the cut?

Sure. The test was a bunch of straight lines. The Delrin seemed to be a bit melty. Gears and things are totally doable, but the straight lines were ever so slightly wavy. More on the bottom than the top. If you have any specific requirements for how you need cuts to turn out, let me know and I’ll try to respond.

Thanks! I cut a bunch of 1/8" stuff, I kept hearing what sounded like the steppers knocking, then realized it was the smoke igniting in the honeycomb, Did you notice any of that?

This is good to know. I have some of this material that I want to cut as well.

I didn’t notice any of that. I’ll try to pay specific attention for something similar next time, though.

Well, got my Pro this afternoon and started doing some testing. Using black Delrin from McMaster Carr (this is scrap from an old project that I milled down to 0.250", from the 0.267" original thickness) your settings worked pretty well to cut through, though the bottom was a little melty. I also tried speed=150, 3 passes @ Full and that didn’t quite cut all the way through.
Then I tried 2 passes at speed=150 w/ Full pews, waited until the machine cooled down, and immediately resubmitted the job (so 2 more passes). Oddly, this came out nearly identically to the 3 passes at the slower speed.
I also tried varying the focus on the second job, and that didn’t appear to have any effect.
I might try letting it cool in the bed for 10-15 minutes before the second job, and see if that cleans up any of the melty-ness. The top 1/8" of the cut looks fantastic, though.

I wonder if changing the focus height on the last pass to .125 would correct the melt? 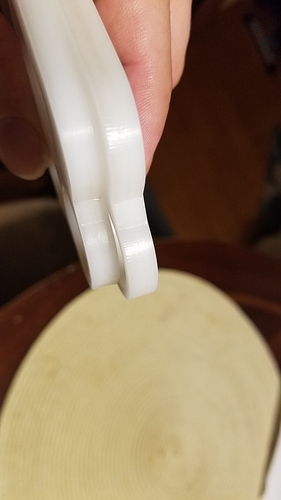 Cool! I’ll have to try it again.

I can confirm that these settings worked perfectly for my multi tool that I created with the same material. Do the cuts immediately after each other. I tried two separate runs at it and I think the Delrin cooled down enough to not cut through on the second pass. When I tell the GFUI to run 2 passes, it worked great!

I think that’s a good starting point. Give it a try on a small area. I had to be sure that corners cut accurately since it was a wrench tool and shots at 130 made it work.

I have a Glowforge Basic. Does anyone know the conversion from the Pro settings for 1/4" delrin?

Haven’t tried it myself, but since full power is more on a pro than on a basic, I’d start with the settings given, then either do multiple passes or decrease the speed until you get it to cut through.

Did you give it a go with 3/8" thick? I’m curious to know as I’d like to start using thicker material.