Hey folks–I want to make a wax seal for my sister’s birthday and thought I’d do it in Delrin for the temperature resistance. I have some 1/16" and some 1/4" here to play with.

So far I’ve not found any recent settings data for Delrin so I ran a little test of my own. Thought I’d share results so folks would at least have a starting point. Note: click on the photo to see the whole test tile. 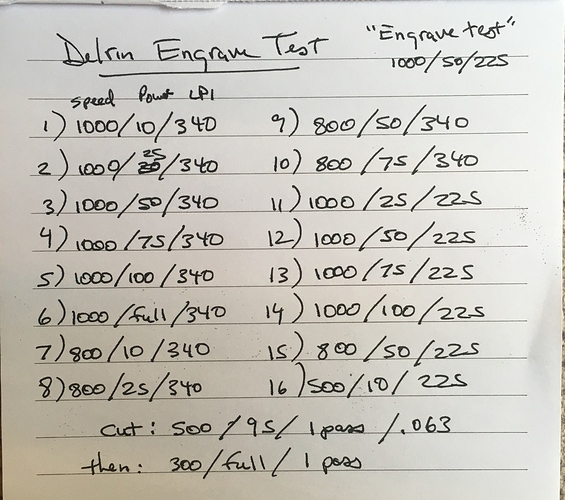 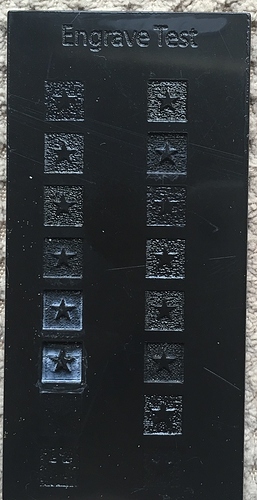 I don’t have any sealing wax on hand so I tested the disc (adhered with double sided tape to a game tile) with 4 layers of embossing powder heated to melt point. I like it! 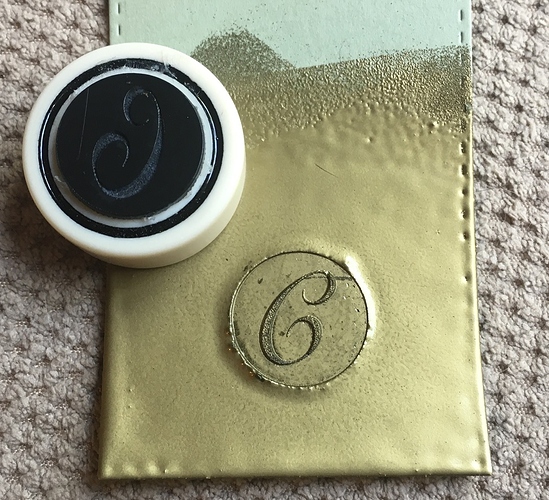 That came out great. Thanks for sharing your settings!

(I’m gonna tack “Settings” onto your title since you shared them. )

i actually like the laser noise in the raised wax letter in this case, but i wonder if mucking with the focus might give you a smoother result.

Wondered the same thing, but the texturing especially on 9 and 10 look pretty cool.

Could be! I figured this is just a starting point. I need to test deeper engraves, as well as 3D engraves; I think a 3D engrave would make a better stamp.

Love this. Lost a seal in a fire, would be thrilled to make my own instead.

Thank you so much for sharing, it looks marvelous!

I went two pass and something more like 180 (can’t look it up from here) because otherwise some of the really fine bits melted together, but it depends on the shapes you’re cutting…

I sold a Delrin leather stamp before actually making one and found that the engraving without melting the thin outlines was a real problem . I ended up with 20 or so passes very low power and fast, and ruined five or so before getting there.

thanks for you recommendations of settings

That first score at higher speed get’s it past the surface with minimal candle and lower smoke, that 2nd pass cuts it down to 1/2 way and since the surface is breached the separation is starting to maximize.
Its that last pass that really breaks through the 2nd half leaving clean straight edges and low melting on the back side. I tried other settings and I ended up having a lot of melt on the back side where the honeycomb meets delrin.