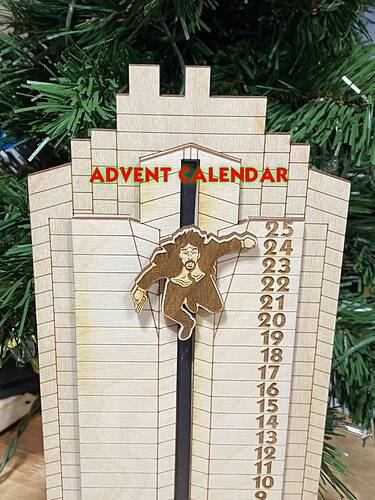 This Ornaments & Accents item by LeatherheadLaserWork has 1511 favorites from Etsy shoppers. Ships from Kensington, MD. Listed on Oct 21, 2022

also as an aside, cmon, mask or sand the smoke marks away. If I’m paying 60 bucks I’d expect a little fit and finish work. As a metadiscussion I wonder if the average customer cares about this stuff or not. For me, it nearly ruins the entire piece.

It’s a downloadable svg file too.

That’s awesome. It’s only $46 without add-on ornaments, which I don’t think is too bad for a hand-made item with free shipping.

do we know either of these were the first to come up with the idea? hard to call one a knockoff if you don’t know which came first (or if either of them was first).

and of course there is a china knock-off for WAY too cheap :-/

See above, re: @shop

Also, as the SVG says:

Should you want to sell physical versions you are welcome to sell 50 pieces, at that point you would need to repurchase this file for the right to continue using it.

Possibly there’s nothing untoward happening here. The original link I posted [and the amazon link] may simply be selling physical copies of the SVG within legal limits.

As for “too cheap”, that’s debatable. If you operate at scale with faster lasers, especially in a place where labor costs are lower, ~$20 might be quite profitable. Too cheap for the average etsy seller to manage? Well sure, it’s a large scale reseller on Amazon, there is no more mismatched comparison.

We all know that the material costs here are almost laughable, that much BB ply is under $1 even at retail US prices.

Eve though it is hilarious, it is still Intellectual Property, so maybe all parties are in the wrong?

Relative dates might not really tell us that much by themselves?

How reliable is that?

Well… since we do not have to make any legal determination about who has the original rights to this idea (none of them, likely), it’s reliable enough. While I can’t know who had the original idea, I can weed out some who clearly did not. And the worst of those tend to be the people who only steal other people’s work. That’s a start.*

It IS possible they made a new product page but that typically wouldn’t serve you well. If you have a good product, you want to retain the reviews and sales info. It impacts your ranking on Etsy.

*FWIW, this is also my philosophy with boycotting. I don’t have to boycott every company who has practices I don’t like. I can just boycott some of the worst offenders. Voting with your wallet isn’t an all-or-none proposition, thankfully. If it was, I’m not sure I’d have anything to wear unless I made it myself!

Also considering the amount of space the original poster puts to talking about making the design, and being frustrated by the copies…it could be cut and paste from this forum. Occam’s razor don’tcha know.

Every time I see this it drives me nuts because Hans falls in the other direction!

The original seller offers to reverse the numbers at no charge if you’d rather count dates than days-to-xmas.

We do know who was a knockoff!!!

The SVG file for sale is from a man who was none too polite when I reached out to him very politely about “considering, possibly referencing me as at the very least your motivation for designing this calendar”. He said I don’t have a copyright so I can pound sand

This link is for my etsy listing for it. I am NOT posting this to make sa sale here, I’m posting it to let you guys know where the original is, and that it was originally produced on a Glowforge Pro

This Ornaments & Accents item by LeatherheadLaserWork has 1546 favorites from Etsy shoppers. Ships from Kensington, MD. Listed on Oct 21, 2022

Hey! Thanks! I had a lot of fun designing it! It was the main project that helped me learn adobe illustrator and it was made on my Glowforge Pro. Just an FYI, any place thats using those photos and isn’t that etsy side, an eBay seller with the name woodenlasercreations or www.leatherheadlaserworks.com is a scam! or is selling their version of it, but definitely not the one in the photos!

Hans is a magnet, I put a lot of thought into how he would move up and down on the tower. So he can be flipped upside down to fall face up or face down! The mechanics of his movement (sliding up and down a recessed magnetic strip) may seem super obvious and simple, and in fact it is super simple. But when I designed this calendar I hadn’t seen anything like it, so it took a lot of time to come up with that magnetic strip idea.

Also, when I say I designed it, my inspiration was this original Reddit post for a huge 3D one someone made a while ago, this person deserves credit for being the TRUE first one, I was just the first laser cut one!

r/woodworking - My Die Hard advent calendar. Every day when you pull a tab, Hans... 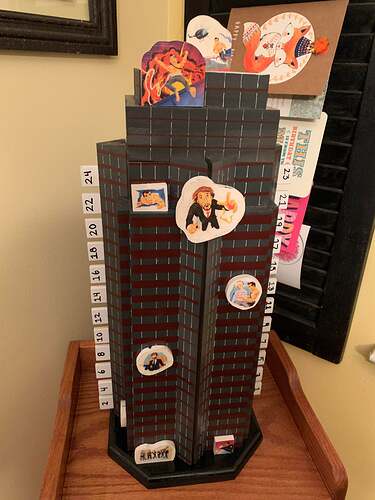 Don’t get me wrong, I think it’s a great idea! But in the film Hans is facing the building (and shooting) as he falls… For some reason, the way Hans has been done feels “wrong” to me, and every time I see it, I try and figure out how it COULD be done, then my brain starts to hurt…

I try and figure out how it COULD be done, then my brain starts to hurt