Hi - Looking for some advice on cleaning. Running a GF Pro and the majority of our designs are all cuts on MDF core walnut and maple plywood. We’ve been using a combination of PG and non PG materials.

Our exhaust fan is getting dirty / clogged almost weekly & we’ve noticed a sticky reside starting to build up on the fans and other components. I’ve brushed and cleaned the fan, also used the 3M spray from DigiKey… After the last round of cleaning with the 3m spray the fan has a sticky build up on it. I assume as soon as I start cutting again everything is going to stick to the fan.

What’s the best way to clean the fan and the residual residue buildup? 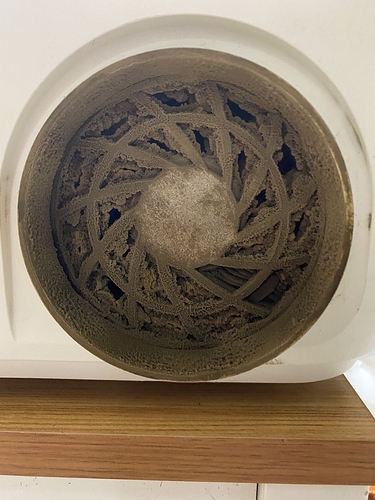 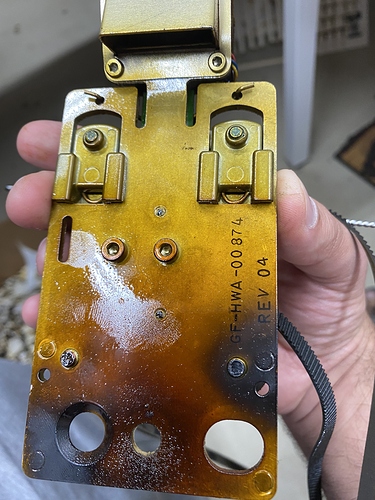 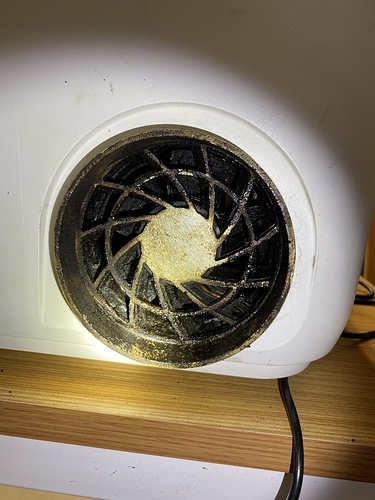 we’ve noticed a sticky reside starting to build up on the fans and other components.

Yikes! I did not have things that bad and using the approved spray was not removed enough so a puddle of spray and crud dried to a hard plastic substance killing the machine. You have the new and improved exhaust system that takes more buildup to be trouble.

The heat sink on the pro makes it hard to access the area as well, You will want to take the machine outside in the open air and using the fan only on when the lid is open, pump through what may be a couple cans of the stuff which can be quite expensive though you might get a clean blower in the end. The warning labels say it is not to be used indoors and there was no way I could get mine outdoors was how I ended up with the frozen “puddle”.

If you have a high volume inline fan that can do the job of rotating the internal fan with the GF disconnected I have been able to move air without having the GF even plugged in, and once cleaned will not get as dirty as fast as moving the fumes out faster leaves less time for them to condense on the GF.

In times before I bought Purel in the largest bottles and used it as a universal cleaner including the head fans where I used a vacuum cleaner to move the air through with the Glowforge unplugged so the excess hand sanitizer went straight to the vacuum and dried quickly.

I used an old C-pap hose that I could just fit over the head fan outflow. The new hand sanitizer is not as good as it will destroy acrylic that the Purel would not, but it remains my cleaner of choice for everything but the optics as a general cleaner of everything.

Yeah, that needs to be cleaned. You might want to clean the spray off of the fan blades…if it is sticky, it is making things worse.

Turn the machine off, unplug it, and use a pipe cleaner or old toothbrush to break up that ash buildup in the grate…you can vacuum the loosened dirt with a hose once you have it knocked down.

Then…You’re also going to need to clean the front of the fan blades, and that is going to be hard to do with that level of resin/glue residue buildup.

I did a write up on how to do that for the Pro model machines here. Be VERY careful and extremely patient. It’s going to be less time to take a couple of days to clean the fan, than to return the machine for repair.

Update: 12/14/2018: Happily, the Glowforge crew has released an “easier to implement” cleaning regimen for the exhaust fan now…instructions for how to do it involve purchase of a special non-flammable degreasing spray cleanser and use of a special cleaning mode of the software…instructions here: Written up below is the old way that I was doing it…it’s a fairly labor intensive alternative that has worked very well if you are willing to keep up with it as you go along and not let it get …