My girlfriend and her coworker designed these to give out as gifts to their artists. My friend (who owns the glowforge) and I thought laser etching was gonna me much faster than hand wood burning the letters. The drawings we decided would just be transferred (laser printer + transfer pen) to retain their color and for speed. As we found out, raster etching even the letters was gonna take fooooorever. Per coaster side, raster was 12+ minutes. We could fit 11 coasters inside the Glowforge at once, so 2+ hours per side per group. Total number of coasters was like 70, so we had many groups! This wasn’t gonna fly so we decided to try the hack of defocusing the laser and creating nested offset vectors. This made each coaster group about 30 mins. At least 4x faster, but probably a bit more.

So the only downside we experienced was dots at the corners where the laser changes direction and the laser power is constant (we think). I hear GF now has variable laser power for changes in direction, but we haven’t had a chance to test that feature out, yet. 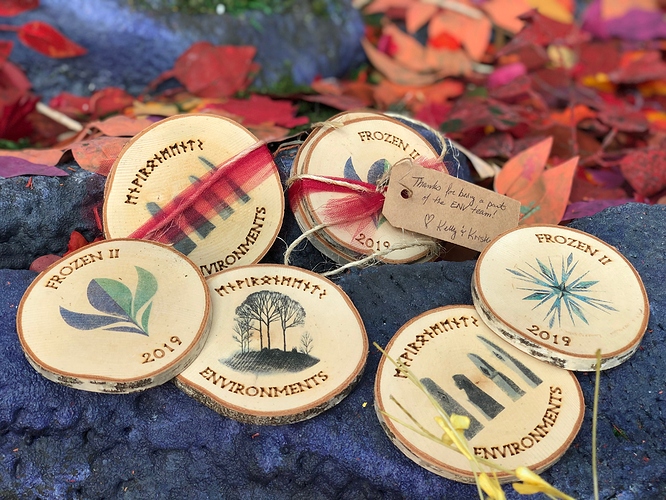 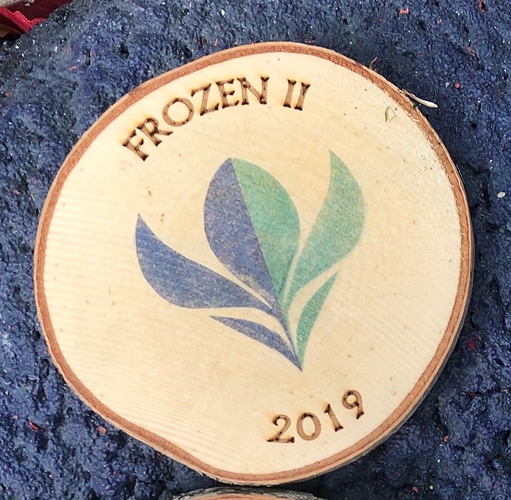 Overburn at the ends and hard corners is tough to beat. You can certainly mitigate it by using slower speeds, but you wanted to go quickly to make the job take less time, so you’re kind of in a bind. I might test it at slower speeds to see if it gives you enough quality improvement to justify the somewhat longer score time.

Thanks for the suggestion! We’ll test and If it’s worth the time it takes.

[I’m the mentioned friend that owns the

Hey, those turned out great! Cool to see the finished pieces with the colored images you added.
It’s a shame the “clean corners fix” and the “speed improvements” weren’t released just a tiny bit earlier so we could have taken advantage of that back in Sept. We’ll have to do another project! Thank you for sharing the finished project here.

Love the look of these with the color.