Hi, Im Dave Cordner, was in kickstarter campaign but lost faith and bailed.

My son however kept the faith and his Pro unit arrived just before Christmas! Nice!

Well I’ve had so much fun with his Glowforge Pro, that I re-ordered a pro in the current campaign, and will receive it this Wednesday! It cost me more than during kickstarter campaign, but with lots of user experience now (since Christmas), it’s worth it.

Oh yes, here’s my referral code, pass it along, is great fun. 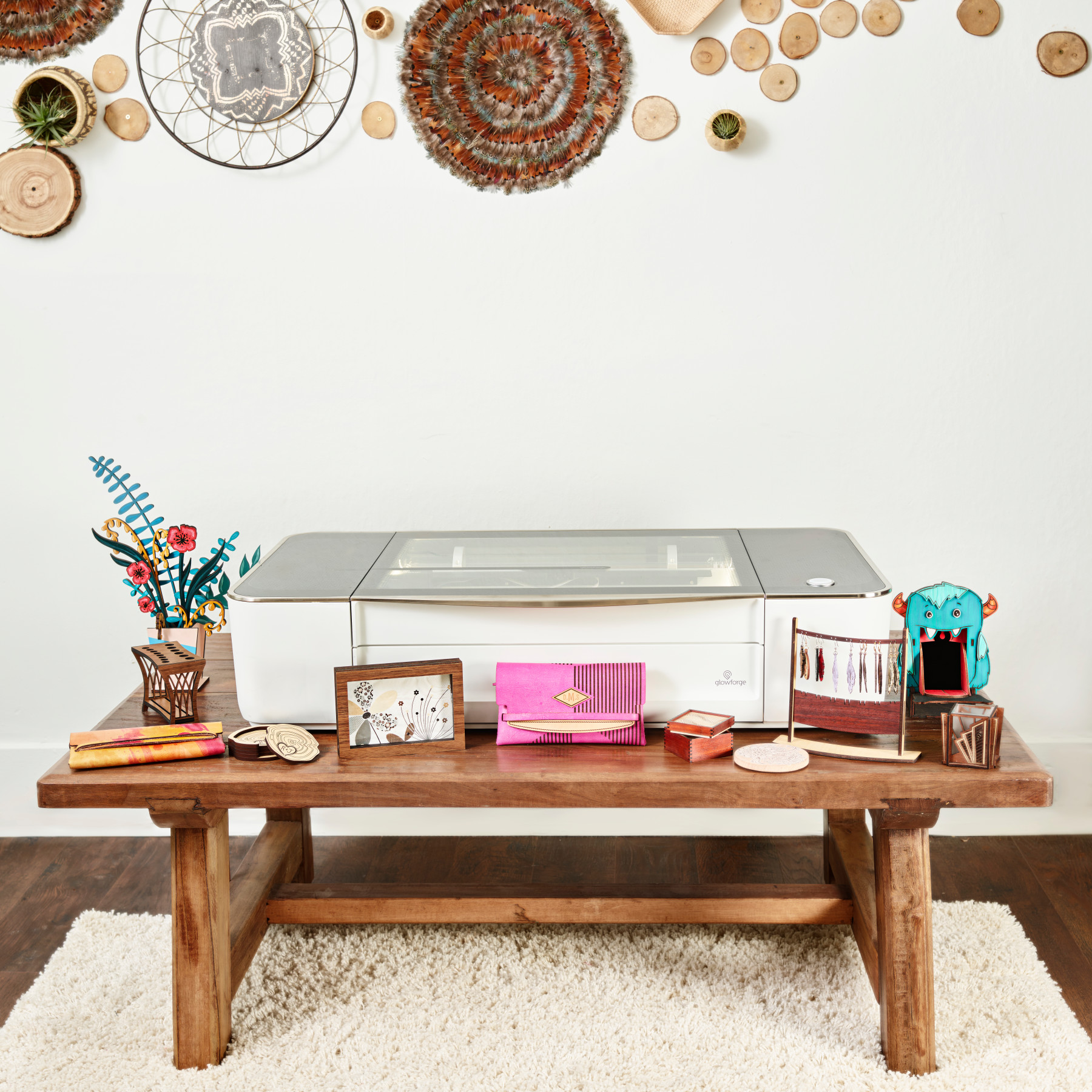 Sorry lost faith, but now I bought another because there are not enough “print-hours” in a day…

I purchased a Celtic font library, and installed. I used Turbo CAD to do layout at real world scale. The first time I tried to pass to Inkscape to create an svg, the text did not come through.

note:
In Turbo Cad, you can select the “pretty font string” you want to print, and “explode” it. The result when you save file as dxf, and load into Inkscape, each of the letters is a grouped path(s) object. Assign a color, and you’re ready to pass to GF to print. Cool side effect of this was if you ungrouped the letters in the string in inkscape, then did select all, and rotate 90 degrees, the horizontally oriented letters/sign become a vertically oriented sign. Each letter rotates independently when ungrouped, and as a string when grouped.

Back to the Made on Glowforge story:
So we have a Glowforge Pro, pass-through slot… who needs alignment jig…

Showed Jeff the restaurant owner a prototype “sketch” not meant to be delivered, he wouldn’t let me take home. He bought my prototype and we installed on front of his building. Letters are 1/4” HD plywood.

The owner liked them so much he said he wanted two more and left the design work to me.
The result, installed just in time for St Patricks Day.

The sign in the daylight is made with baltic birch (.5”).

As each letter cut, I slid the panel further through, aligning the previously cut letter with the cutout(s) (pushing the print job through manually).

I do not have AI, to cut and stack my art for use in jig alignment techniques as describe in forum. (thanks forum).

I decided to use the previously cut letter’s hole in the wood, and zoomed in, “select all ctrl-A”, followed by up arrow clicks to move the job along. Worked very well. Note, each time I had the lid open, I was sure to relocate crumb tray as pushing material through, can cause miss-alignments by tray movement.
I used a rubber stamp blank sitting on left side of crumb tray for simple, keep it square tool, remove, close lid, print next letter.

The lighted sign is mounted on 8’x9” box/frame. The frame holds the individual letters, and protects wiring and holds controller which displays 300+ patterns. The LEDs are linked letter to letter left to right. This allows patterns to run across the restaurant/pub name. Have you heard the phrase the whole 9 yards? (Length of GI induction processing line at basic training), well the LED sign has 12 meter’s of LEDs.

The letters are constructed with .120 clear cast acrylic, for the base, 1/2” cast white acrylic for the sides, and proofgrade green acrylic on top. This is all. Capped with. A gold letter printed and affixed to acrylic Thanks to the Glowforge user forum, and frequent posters like glowforge user “cynd11” for giving idea adding double-tack to material then printing resulting in a sticker.
Here’s a couple pics from the bench

I live in the Denver area, and well, enjoy CLANCY’S IRISH PUB, 7000 W38th in Wheatridge, Tuesday evening is a Celtic Music Drop in evening of fun.

Drop by ask Jeff the owner who made the signs, I may have a guitar, mandolin or Guinness in my hand, but would love to visit.

Very nice. Glad you are back.

Fantastic story! Sounds like a good call, and welcome back!

Thanks, as you can see old programmer flat forehead, originally posted on my sons page.

Thanks,
I’m reworking the paper and will share soon.
Ran out of business cards, time to reload and get the new pro installed.

Btw, I have not read any posts regarding noise protection. I highly reccomend getting active noise reduction headsets, ala Bose, or any others that listen to the environment and manages what you actually hear. Makes a long day, better.
Get a couple sets, you will be doing demos

Years ago as a private pilot, I never appreciated untill I tried, now in all noisy situations, new batteries and headsets. Wish I had used in all those data centers…

I am always amazed at what people think to do with their Glowforge. Amazing!

Was a very fun project. And… a couple who just opened a little coffee shop, want to talk about a custom sign for them. Yay

I am out in CO a few times each year visiting friends… I might have to drop by Clancy and see the work you did.

Looks good and happy to see the pass through being used.

Sounds good. There will probably be a large Celtic festival in August.

I created a folder on google drive. 3 videos, and a pdf of my original write-up.

Thanks again to everyone who mentor users along, and thanks users for describing projects.

Thanks for that! Really cool Dave