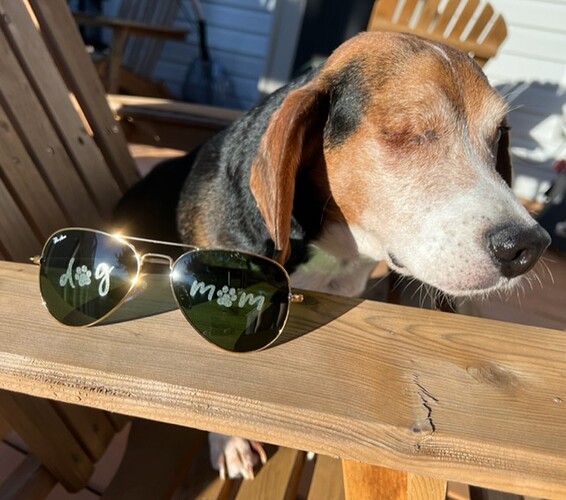 First off, not all lenses are laser safe. Lenses made with glass are more likely to be laser safe because glass its self is fine. However, there often is more then just glass in tented glass lenses. I found these sunglasses: Pro Acme Classic Aviator Sunglasses for Men Women 100% Real Glass Lens Which are real glass but have have a UV coating. So then the question was if the UV coating is laser safe. UV coating is made of polyethylene, calcium carbonate and kaolinite; which checked out fine as far as potential to damage the glowforge. The only risk left was if there would be any gas that is harmful to people. I have a Medify MA-35 Air Purifier with H13 True HEPA Filter mounted above my GF to act as a fume hood and help mitigate the risk.

So now onto the engraving. The first thing was to decide on good settings. Whenever I engrave a hard surface material (i.e. not fabric) my go to settings at 800 speed, and 80 power. They balance well and give space to tune in speed and power. I worked a paw print into the design which gave me 5 chances to tune in settings. 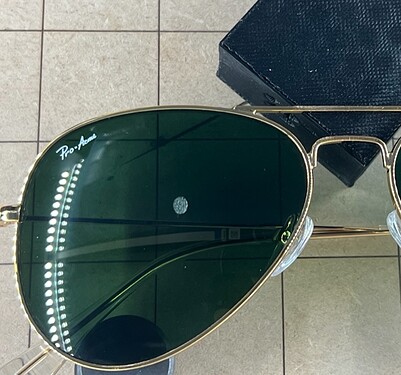 The results turned out good. I even opened the lid and lightly touched the engraving to make sure there was no flaking (did this carefully making sure to not move the glasses). I decided to bump up the power a little more and ended up with my final settings of 800 speed, 90 power, 270 LPI.

The lenses were not too bad when looking out through them but I figured why not try and find a place for the design that is more out of the way. I first decided to put a beagle on the lower side of the left lens. It came out good but I was not satisfied with the placement accuracy. So I decided to make a template of the lens that allow me to place the design where I want in the design file and then just line up the lens frame. 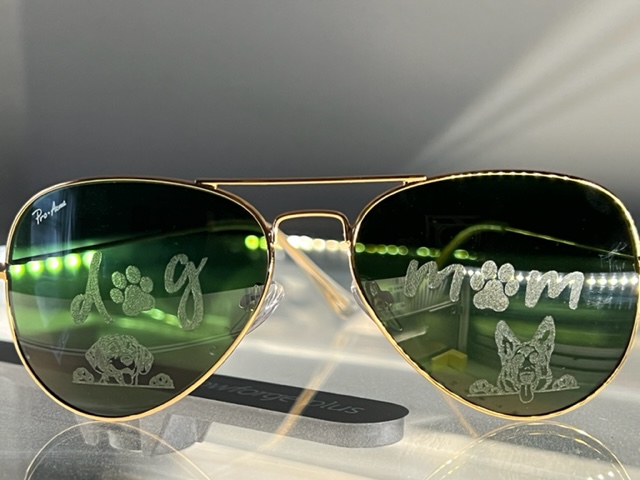 This had much better results with the german shepherd. Here is the SVG of the frame if anyone want to use it to better plot out the design:

And here is what the results look like from the inside of the frame: 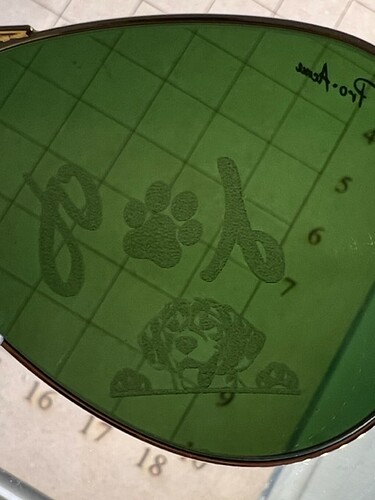 Thanks @MyDogsThinkImCrazy. You always have such inspirational “think out of the box” ideas. Now you will need to choose or design an outfit to go with them

The glass only needs to be high in iron for normal protection, though a fellow glass blower who was a college professor in such things noted that there was an area in the infrared not covered by iron that was covered by neodymium and recommended though not found commercially. So she used neodymium glasses with iron green flip ups.

Jimmy Wayne Westie, Black Betty and me are sending your baby lots of kisses.

I need more Westies in my life

throwback to me and Neo (who was my first dog and I grew up with. He passed away just after college) 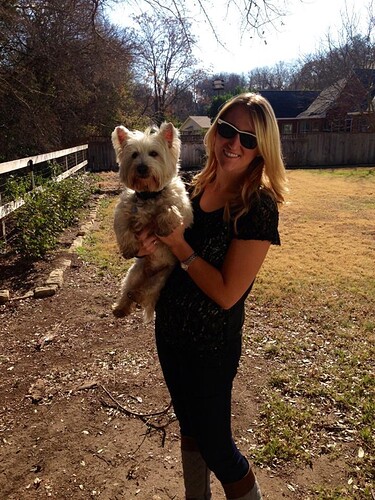 the question was if the UV coating is laser safe

Is the UV coating still doing its job after engraving? If it’s on the outer surface, perhaps not.

I don’t think it is doing much a job. I don’t see them having a good use case for daily wear but I see them being something that might be a hit as a prop. I might make some that hint to the Almost Famous movie cover and use them for a photo shoot.

They also might be popular when it comes to bachelorette parties or wedding things. The engraved sunglass lens is probably more useful then these ones I usually see 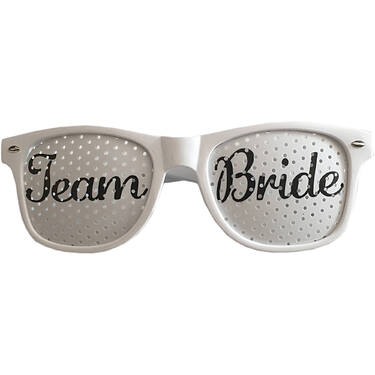 Ooh. I got a kiln for Christmas, I’ve got a pair of the green glasses but I’m going to need to look into the spectra here. Cool tip.

I absolutely love these!

I got a kiln for Christmas

Photos? What will you be using it for?
I had a friend who was making enamel earrings. He sold a lot of earrings but it cost him his eyes.

Didymium glasses are exceptionally cool. Definitely wear them to dinner. The food will look incredible!

A Paragon SC2. It gets up to 2000F. I will be using it mostly for enameling and hoping to learn about metal clay this year too. I’ve been working with a little beehive kiln for a while so this is a huge upgrade.

Regretting doing the literature search on the IR damage - looking for info reveals a lot of arguments. Who would have thought protecting your eyes would be controversial?

What happened to your friend’s eyes?

What happened to your friend’s eyes?

Ya know how clear egg white turns opaque when cooked…
Even just normal living has turned my eyes very yellow in ways I did not realize till one eye, which had a hot bit of steel drop in, healed but eventually could not be adjusted for focus and I had it operated on. So that eye sees colors as they are and the other distinctly a yellow cast. That yellow does not affect focus so I am letting it be for now, and my brain has made the adjustment so I do not see it much except when I concentrate. However, I did not do much staring into heated ovens as I used them primarily for jewelry casting.

If you want some inspiration do a deep dive into the Edo Cloisonné Enamel Vases. There was a store near me back in the day that specialized in them, and they were the most amazing artwork I think I have ever seen. Somewhat later they became a big trade item and the designs became about what European fad was happening and they started taking up children for their small hands and good eyes and turning them out when they went blind so much less impressed.

There was a woman that had a book and taught a class that I took but I haven’t seen it recently and don’t see it for sale. If alive she would be about 100 by now so not a surprise. I ended up doing stone inlay instead, and never went far with the cloisonné.