I recently took Mark Rober’s Creative Engineering course on Monthly.com. I created 3 projects in 30 days. The second assignment was to build something related to art. I chose to build a robot that would physically perform commands in a bisic turtle graphics style.

I also wanted it to be able to accept an L-System definition and generate its own turtle commands to execute. An L-System is a starting sequence of symbols, then a series of rules is applied to the symbols a number of times. The resulting symbol sequence, in my case, represents a design. I won’t go into the specifics of it unless someone really wants me to.

It’s not as precise as I wanted, mainly due to the cheap stepper motors used and the wheels being too big, but it got the job done. However, it wouldn’t have been nearly as solid as it was without being able to cut the parts for the body on my GF. The housing was super solid, so I knew any issues were in the electronics or the mechanics. 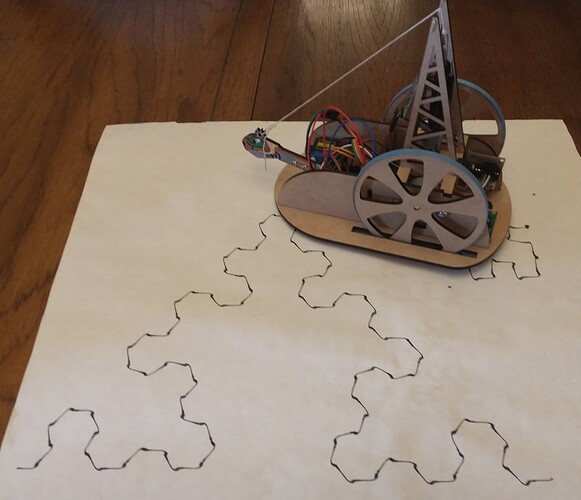 Given more time, I would have put a body on it to hide the wires and such… 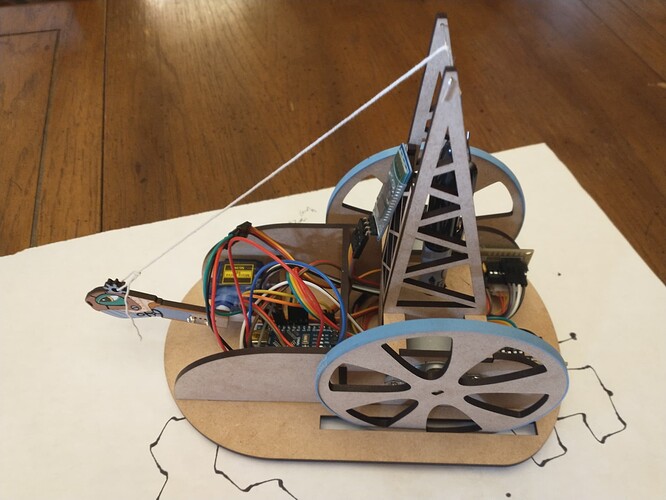 To create the images, there’s a fine point marker in the tower held up by the string that’s connected to the head. When the bot needs to draw, it raises its head, which lowers the marker. When it needs to stop drawing, it lowers its head, which raises the marker. As for movement, the whole thing works like a zero-turn mower. Rotating the wheels in the same direction moves it forward and back, rotating them in opposite directions causes it to turn. The hole for the marker is directly between the wheels. This is should make the marker stay in place during a turn without drifting.

Here’s a timelapse of it drawing a couple of designs (The wire is for power only. Turns out a 9v isn’t powerful enough to push this.

The lights on the top are on the Bluetooth receiver, which is how it gets its marching orders.

This is so cool!

That’s very nice! My roommate and I took that class as well, and the coffee carrying box we made using the

is starting to show its age after a year of use! It really is amazing what that machine lets us make

That awesome that you made something you’re still using! Here is a link to the post where I described assignment #1… Fruit Cup Liberator

That is amazing! Now I want something that clings to the wall and does graffiti.

That’s actually not all that hard, and there are many open-source designs. I’ve seen them mostly used for what I would call “vertical” CNC but they are adaptable. They had more than one at the last maker faire I went to here in the ATL. The local maker space has/had a couple. They were doing logos on the side-walls of popup canopies.

I’ve been thinking of taking this class as well, would you recommend it?

Impressive! That’s an artistic robot, in many good ways.

Yes I would. Just a couple of things to keep in mind.

Make sure you can put in the time to get the most out of it. There were a few of nights where I was up pretty late to hit a deadline, but it was worth it. Hitting the deadlines isn’t a requirement, but it’s tough to catch back up if you fall too far behind.

There are a good number of kids taking the class. It’s great to see them taking an interest in this kind of topic, but it means the feedback you receive is sometimes not too helpful. Give feedback to every project that catches your eye, not just the ones assigned to you. That helps with receiving more feedback.

It was a good experience. I’ve never been comfortable adding electronics to my projects and now I’m putting together plans for a remote controlled track vehicle I can use in the garden and to mow hard to reach areas. LOL.

Interesting how precise it seems to be. I’ve been thinking about something similar but opposite. That is quite messy and imprecise in its drawing (or even painting if I could work out how to do it).

I’m reminded of my automated lawnmower, it doesn’t do stripes because it is darn near impossible to be precise enough for stripes, so instead it is completely random.

Thanks this is really helpful advice. The electronics part is really why I’m thinking of doing it as well.

Plus when I am given an assignment I seem to do really well and enjoy it but when I am not and I could make anything I want I struggle to decide what to do!

Considering my difficulties in getting around I really need one to cut the whole (postage stamp) yard. I have been looking for a while but they all just have a buried wire fence and bounce about like ping pong balls. Plus, if I could put in the buried fence I could just as easily (not at all ) mow the lawn myself.

I would prefer to have it triangulate from a few sending units and run a cut path but to be able to guide it like an RC truck would do as well. I have several power chairs in various stages of dead that would make for great wheels on the ground.

Thanks this is really helpful advice. The electronics part is really why I’m thinking of doing it as well.

Plus when I am given an assignment I seem to do really well and enjoy it but when I am not and I could make anything I want I struggle to decide what to do!

That’s me as well. I needed the deadlines to keep me motivated. Mark’s videos give you just enough to put you in the right direction to do some research on your own.

I would prefer to have it triangulate from a few sending units and run a cut path but to be able to guide it like an RC truck would do as well. I have several power chairs in various stages of dead that would make for great wheels on the ground.

Sounds like you are looking for a mowing 3D printer for your whole yard! Put your yard layout into Cura and upload the cut path.

Actually using the entire base of a power chair might work really well as an automated mower. The wheels are already wired to run independently in either direction. If you could move the battery packs up enough to get the blades underneath, you’d be a good portion on the way there. I may need to keep an eye on some sites for an old power chair.

I bet if you got in contact with a local RC shop, they could put you in contact with a few RC nerds (term used in the most positive sense) who would be happy to help with the automation. You could even just sit on your porch and “manually” mow from the controls. Just thinking out loud.

This is amazing and beautiful!

Sounds like you are looking for a mowing 3D printer for your whole yard! Put your yard layout into Cura and upload the cut path.

Pretty much. The whole yard is about 750 Sq ft if that much, but less than 500 on one piece. (and there is no porch

) I was even thinking hedge trimmer instead of spinning blades so it would be more like a beard trimmer than a crazed Ninja, and a reasonable cut path would be more sedate than all that bouncing. I could have a cut path for the front and another for the side and path. They sell the things on the length of the wire, doubling the price when they double the wire “because it can cut more area” but the machine itself is the same and it cannot do different areas!

Someone could make a lot of money making on that would do different cut paths at different days going over any particular sq ft just once and not bouncing around missing some on a narrow side yard. And used power chairs are commonplace. I got mine as the batteries were costing more than a used chair with good batteries.

When I moved here I did not think it would be the far side of the moon, but some times it feels that way.

I like the idea of the bar mower in the front.

I have been thinking that for many years and even talked to an executive of one of the companies. He basically said that as long as demand outstripped supply at ridiculous prices there was no incentive to spend any extra money and nobody would do it.

Given how they charge the price of two machines for double the wire to bury that is certainly the case.

I have always thought that actually “giving the suckers an even break” was a reasonable business plan over the long term. 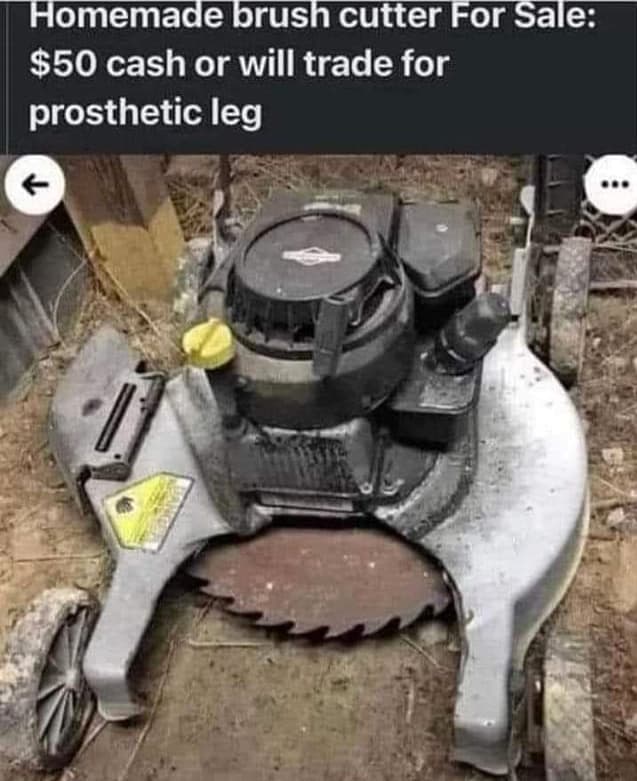