Finally got around to the Dymaxion globe.

Scaling for BB was a pain but it all worked out. It was fully friction fit but I used tiny dabs of glue to make it bulletproof. 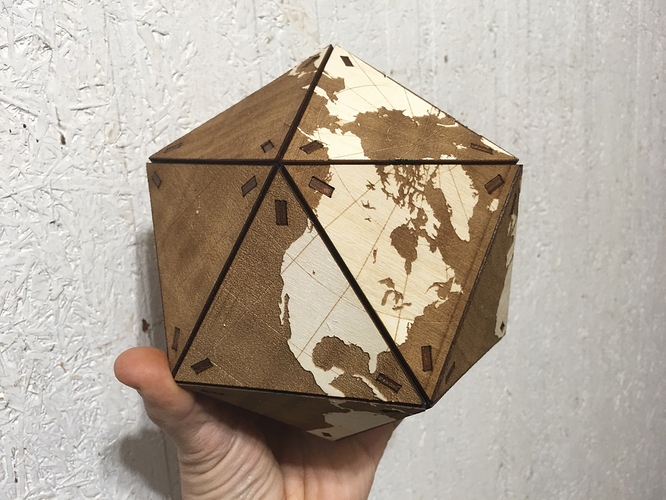 I mostly wanted to build it to learn its tricks for my own designs.

Really love how it turned out. I think the others I’ve seen are the opposite…where the land masses are engraved and the water is “raw.”

I will say that it was a very long process to make it this big… I engraved as vector.

I do not recommend this. It required several separate engraves and took basically all day.

Next time I would rasterize it and use vary power to get the lat/long lines deeper, instead of 2 separate vectors.

In fact, next time I would probably just score it, and maybe watercolor the oceans blue. Ugh “watercolored dymaxion globe” added to the list. Thanks @bruceaulrich… I am trying to get my list DOWN.

ha ha…glad I can help!

In fact, next time I would probably just score it, and maybe watercolor the oceans blue.

I don’t think you should do that. Do a shallow engrave for the continental shelf, a deeper engrave for the general ocean and a deep engrave for the various trenches. Then fill with a blue epoxy resin. The different depths will have more “blue” and be a deeper color. You may have to first paint the oceans white to get rid of the brown background, but that’s easy. I mean, how hard could it be???

I’ve been thinking of making one of these myself had this idea to make the sea out of perspex and then the landmass out of wood maybe putting led’s inside making it a light.

You forgot the built-in LEDs to simulate day and night.