After realizing how narrow this cheap tactical flashlight I bought was, I’ve been working on a piece inspired by Steven Universe – and further exploring 3D engraving of acrylic. I wanted to mount a sword to the flashlight and run its powerful light up the blade. 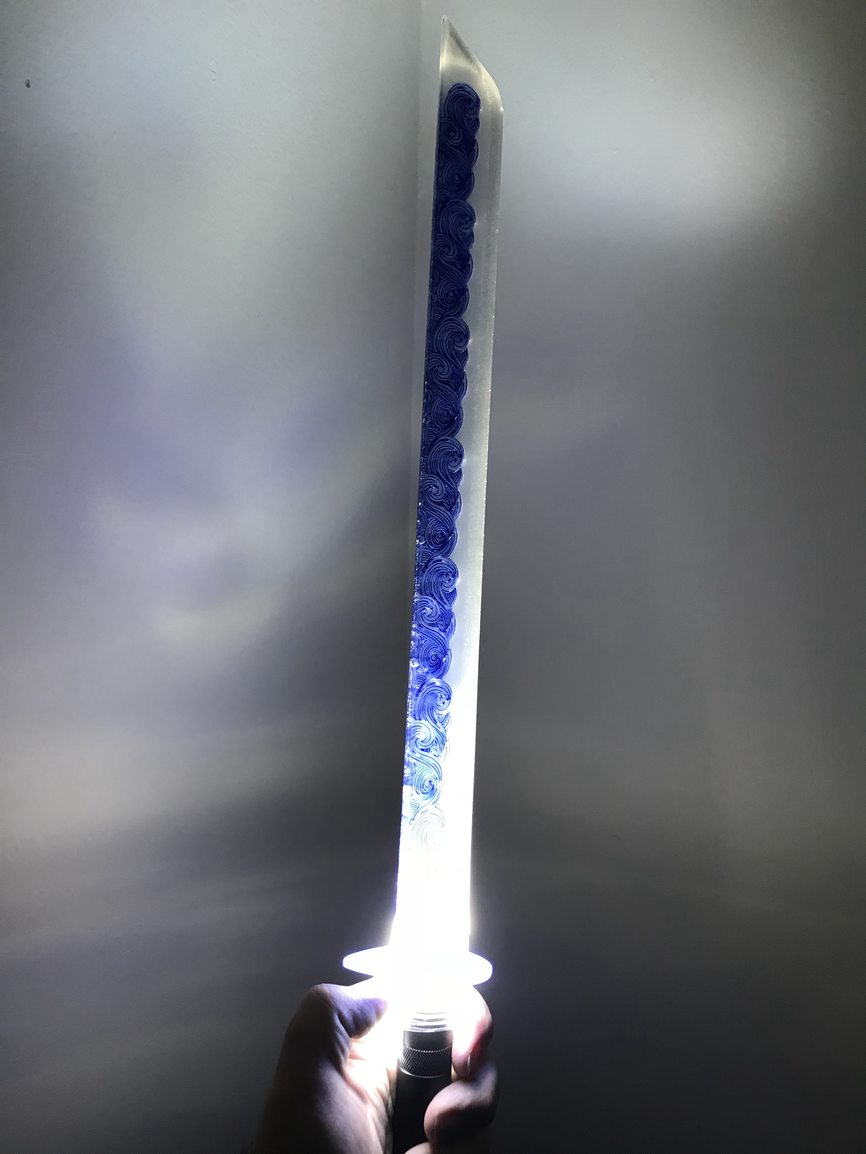 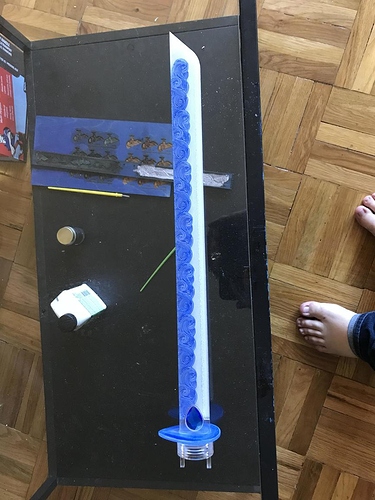 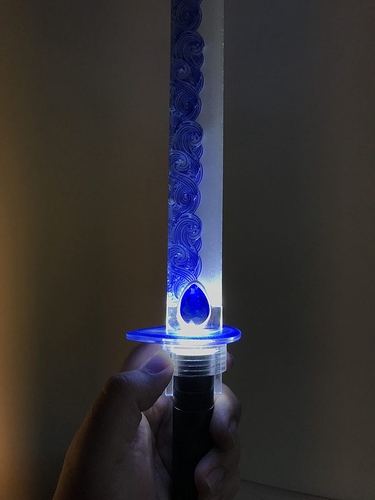 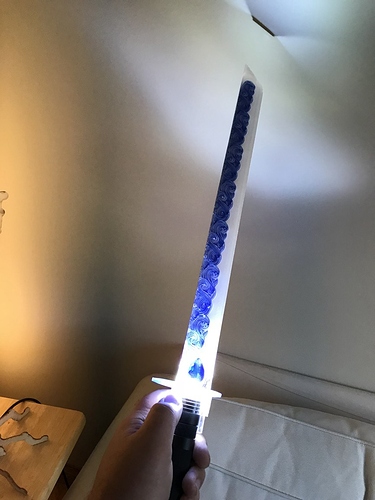 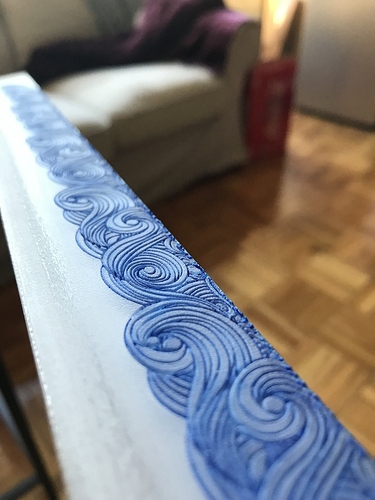 I did a deep 3D engrave of the pattern and then filled it in with stained glass paint (while still on the glowforge bed), then did a second 3D engrave to shape the blade and make the “sharp” edge thinner than the blunt one.

I like how the pattern turned out, but the material didn’t conduct the light very well after the initial engraving. I’ll have to keep working on that in version 2. But I also think I’ll be experimenting with the double up on 3D 3D engrave and stained glass paint, which is why I wanted to share. I don’t know if it will ever look good as an edgelit acrylic technique, but I like the way that it looks overall.

Ooh, nice idea! I think that’s kind of a long way for the light to travel, though; maybe a more powerful LED flashlight could do it…

I’ve been looking at Amazon listings for el wire and thinking about cool applications for a long, uniformly-lit light source. A sword would be the perfect project, I’d think! The power source could be hidden in the handle…the el wire would have to run down the top edge of the blade, somehow. Maybe an engraved channel for it to fit into?

That looks great! You can buy 3mm LED strips and run them along the top length of the blade to get an even light

I’m hoping a more powerful flashlight isn’t the solution – this one is at 1600 Lumens and already generates so much heat you can’t keep it on for more than a minute before it starts to heat up.

I’m not one to discourage experimentation, but I will warn you that I used EL wire in the past and I’ve found that it doesn’t give off a lot of light. Unless you’re in a really dark environment, it’s more like it appears to be glowing, than that it illuminates the area around it. It could still create a good look, though.

Definitely going to try that. My ideal was that the whole sword would turn out clear and the blue would light up, but that goal is seeming further out of reach. If I re-jigger the design so only the blue glows, and the rest is painted silver, I can probably conceal LED strips along the blade.

I used EL wire in the past and I’ve found that it doesn’t give off a lot of light.

Well, shoot. It looks so cool in the photos!

Yeah, I can almost guarantee that those photos have either all the lights in the room shut off and/or are playing some tricks with exposure.
I used it in a Green Lantern costume in 2012, and you can see from the photos (link to the album) – it glows a little, it just doesn’t cast out light. And in a fully lit room, you really can’t tell at all; at least you couldn’t with the wires I had.

it glows a little, it just doesn’t cast out light. And in a fully lit room, you really can’t tell at all; at least you couldn’t with the wires I had.

True. I used it in a theater production of Joesoh & the Technicolor Dreamcoat. I used Adafruit’s extra-bright el-wire. It’s twice as bright but can only be half the length for the given voltage/amps. The coat was made up of strips of different colored cloth. In between each strip I ran a line of el-wire so there was something like 300’ of el-wire running up & down all over the coat. (Lots of batteries in the lining - it needs to be converted to AC and it needs juice.)

The coat dropped onto Joseph from above in a blackout - and then he turned it on. Awesome. But when the stage lights came up the el-wire light got washed out. The extra bright stuff looks good in closeups though and in dark environments.

For real brightness LEDs are better. But to get that even glow you get with el-wire you need to frost the covering & get some distance between the lights and the covering glass/plastic. That will get rid of the pinpoints of light that otherwise can show with LED lights.

The theater actually keot the coat - usually their costumer gets to keep costumes she makes so she can use them for other productions.

The wire wasn’t bad because it was in vertical runs mostly (a lot of pattern tracings on the back/chest/shoulders) so its weight was fairly well distributed.

The batteries & those little AC inverters were stashed in a pocket that ran all around the coat at the beltline. Helped keep the weight from being too bad but it wasn’t light

I wonder if you could get the blade back to clear using flame polishing.

Also wondering how that would look with the blade made from Lightguide acrylic (apart from looking expensive).

I’m gonna try a few things before I head over to more expensive materials. Up until now this is a project I’ve run out of my scrap pile.