My rodeo boss is looking at buying a janome machine for embroidery. We put sponsor patches on shirts. He’s tired of spending a ton of money having someone else do it. Plus we’ve been burned by a few companies not delivering on time. Anybody know about this stuff? They’re trying to sell him a $2k machine and get him to buy some $1400 digitizing software to convert svgs etc. The guy demoing the software has been at it for about 45min. The machine was a floor model and hasn’t been doing all that hot. I’m not impressed.

I started pursuing embroidery machines a couple years ago (but then stumbled upon the GF). I got a cheap one and some of the cheap software and it never worked out. I ended up returning the machine. After that I did a lot more research and eventually decided to wait for the GF.

Janome is one of the better brands. The prices you listed are in the mid-range for both the machine and software, but still in the consumer (not industrial) range of both. The machine I would have loved to have was $10k and the software package I was drooling over was another $3k. The cheaper machines are designed for home use only, are slow, you have to change the thread color each time, and the software is very limited.

It’s a big financial investment up front, and it has a long learning curve just like the GF with lots of new terms, software, testing, and tweaks to do. If your boss has the money to spend and can spare the time for an employee to learn it all from scratch then it would be exciting. Depending on how much embroidery you are contracting out, it might just be cheaper to continue that way.

I have a Janome sewing machine…definitely top of the line.

I think they got him hooked on a single spindle model. He does about 30 shirts with 15 or so logos each. Judging by how much we spend to get someone else to make them, I think we’ll break even with a $2-3k machine. I found a few people that’ll digitize for $25 or so. I think we may be able to get the already digitized files from our previous vendors since we paid a digitizing fee already and they never delivered. If the machine holds up and I don’t have to run it, we may be good to go.

A lot of what you want is to do with quality. I recently bought a £600 Brother sewing machine and a licence for Sewart Digital (about £70). This won’t give you to end quality but I’m more than happy with it. 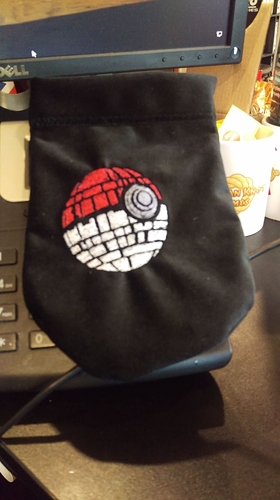 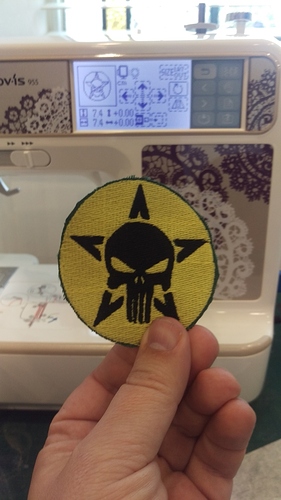 I am the queen of embroidery machines… I have a few single needles ranging from $700 to $5000, and a 10 needle brother… If you are doing just patches, I would go with a cheaper single needle. As for the software, I digitize all my own stuff, I use embird. It is much cheaper. I think I paid about $500 for the 2 programs you will need to digitize. Some programs (along with this one) will tell you it automatically does it, It will but it’s not great… It is better to manually do it. Which ever you get, you will need to learn the software. I have 3 different software and prefer embird. Maybe because that is what I learned first. If you can’t find someone to digitize, I can for you. Here is a link to my etsy shop… Everything in it is designed and digitized by me. Let me know if I can answer any more questions for you. https://www.etsy.com/shop/SusiesSpot?ref=seller-platform-mcnav

What is an example of a competent $700 machine? Embird looks like great software.

if you are only doing patches and small things look at this machine… https://www.amazon.com/Brother-PE770-Embroidery-machine-lettering/dp/B002MQI2NM/ref=sr_1_3?ie=UTF8&qid=1517060465&sr=8-3&keywords=brother+pe770+embroidery+machine

I do have this one. and it works just fine. It’s not nearly as user friendly as the more expensive ones but it will get the job done.

I’ll second @mccormickmania w/r to the PE770 as I have one. In addition to Embird, check out Embrilliance before pulling the trigger on a software package.

I’m a fan of the BabyLock Ellure Plus BLR3 - but a used BLR2 or 3 are both sufficient and made by the same manufacturer as the Brother PE770 line.

At this point in the maturity of home embroidery sewing machines, anything you get in the home (as opposed to industrial) space will be enough to get started, but not necessarily have a streamlined workflow.

The major variables I found during my research were:

My main usage would be to create logo wear on demand (SailZing.com) rather than sending it out and having to commit to shirt sizes, etc. Our logo is only a few colors and largely spans of color. The suggested machines would probably work well.

That makes sense - with 3 caveats:

This sounds like the sort of thing I would do if I had a company that required a relatively small number of embroideries to be done (as in - doesn’t take my time away from other higher-value work at said company). But then again, all of us have a device in common that already show how we wanted more creative tools to play with in-house, so clearly we’re willing to do a bit more work to achieve that!

I’ve been informed that the company we were previously working with has been sold three times this year alone, so we won’t be getting those digitized logos back.

Rodeo boss also pulled the trigger and bought a machine. Completely different one than the Janome we were looking at though. He got himself a Brother.

Mrs Rodeo Boss saw that the Brother machine sitting next to the machine we were interested in buying, came with preloaded Disney stuff so they bought that one instead. Happy wife, happy life.
I have no idea what model it is, but it’s a single spindle like the Janome from what I’ve been told. I wasn’t able to get a clear answer on wether or not it was solely an embroidery machine or if they went with a sewing combo machine.

If it does what they need it to, and gets them excited about doing other projects with it as well, and I don’t have to touch it, I’m going to let this one be a win.
I imagine I’ll still be the go between for the digitizing portion since I hold all the sponsor logos, which is no big deal. I’ll see if theirs came with that Brother digitizing tool you guys mentioned. Could save them a buck or two on the simple logos.
Thanks!