I finally finished a reproduction Makers Mark for our 1919 GMC. The original plate was stolen off the truck in the '80’s. I was lucky enough to find a guy who had one and was willing to take some really good photos.

It’s been a long journey. I’ve done research on different techniques to make engine plates since our original went missing. I now believe the original process was either chemically or electrochemically engraved, and the resist was applied either by a lithography process or a photo direct mask.
A few years ago I started to redesign the rather unique font, as it was not a top priority it took about 7 years, and I now have a full version of the font made. I called it “Old Truck”
The two other fonts are a modified version of “Transit” which is the font you will find on British motorway signs. I cleaned it up, and used it as a base for my new font “American Transit” The “S” and the “D” were modified to match the original plate. The third font was a great find “Alternate Gothic” This was a direct match. I was even able to verify it as an authentic font from a font catalog from the early 1900s

I used Fusion 360 and Inkscape to assemble the design, and create the SVG.

The 0.8mm aluminum plate was prepped by cleaning with scotchbrite 00 steel wool equivalent, then sprayed both sides with Krylon MAXX matte Black paint.

Engraved on the glowforge (Settings Redacted) Then a gentle pass over the surface with the scotchbrite to remove any remaining residue from the surface.

I used a Hydrogen Peroxide/Muriatic acid mixture, it took about 15 min to etch to the depth I wanted. The process is similar to the technique used in this video at the 3:20 mark. I have made other plates with Ferric chloride, but I find it miserable to work with, and I can get the peroxide/acid local any day of the week.

After the acid bath I wiped the remaining resist off with Acetone, repainted the plate, and squeeged off the excess paint. After drying, I sanded with 400 grit sandpaper. 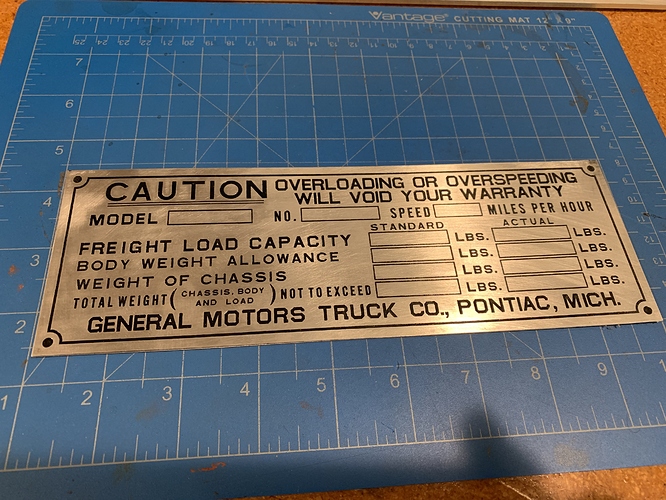 The original picture I started with. 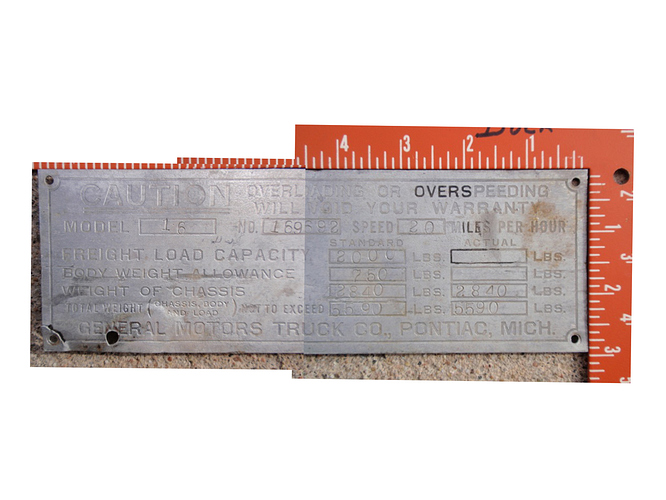 That’s on point! Are you going to metal-stamp the info into the empty fields?

That’s the plan. The last leg is to find a set of vintage stamps, in the correct size.
I’m pretty sure our top speed read 15 on our original.

Every day I’m amazed at what people do with their GF. Awesome stuff!!

That was a lot of work, but worth it…it looks better than the original.

This is great and I wouldn’t change a thing about your writeup but it does need to be moved to the “beyond the manual” category because of the settings. Any regular can do it, but I thought I’d give you a heads up before I or anyone else did it.

Nah. Tis a silly rule. I redacted the settings.

I redacted the settings.

Boooo. Settings on weird materials are gold. Bummer that you removed them. Would have been a good BTM.

Anyone can PM me for the settings, and I have likely already posted them in another thread.

Very cool project! I have done a little ferric chloride etching and it is indeed a pain. Don’t forget to link to that video you referred to!

Out of likes, but amazing work!!

Freeze a bottle of “unstabilized” H202. The part that does not freeze is 30% Hydrogen peroxide. There won’t be much.

This sounds fairly dangerous. Be careful, peroxide is nasty stuff at high concentrations.

Yup. Heed warnings and do appropriate research before beginning any new project.