Engraving following the path instead of going back and forth?

I make my artwork in Photoshop, open it in illustrator, trace it, and save it as an SVG. Someone told me today that if they were paths instead of rasterized that it would take a ton less time. It goes back and forth when engraving, rather than following the path. I thought by tracing it and saving it as an SVG that’s what I was doing. Is there a step that I’m missing?

Engraves are going to go back and forth.

To follow a path you’ll need to either cut or score.

Yes, you have to convert the object in your image to paths. Simply saving as am SVG does not do that, SVG can contain bitmap and vector information.

That’s what I thought. Thanks!

Orrrr, you could do this which has some limited success:

I’m converting them to paths in illustrator when I trace them.

Yikes! That sounds like a lot of work for not a lot of payoff. I’m currently making signs out of my designs. Each is about 10x10 and takes an hour to an hour and a half on BB. I asked in a laser group if there was a way to cut down on the time and a bunch of people responded by saying that it should be following the paths. I figured because it’s filled it should be going back and forth but wanted to double check.

Then you need to remove the bitmap from the file before saving, or set that to “ignore” in the GF UI before printing.

I asked in a laser group if there was a way to cut down on the time and a bunch of people responded by saying that it should be following the paths.

So there are a couple of things you can do wit the engrave on the GF.

If you’re using a high LPI right now, try 270 and see if that gives a reasonable finish. 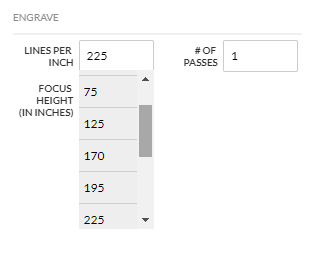 2. If you’re not already, put you rengrave to the highest speed. You can modify the speed in the PG settings, or just push it all the way to the right in manual.

These are really the only tweaks you have, and it’s up to you to decide which combo gives you the best quality to speed settings for your use.

This can make your engrave time longer depending on the width of your piece.

It’s 10x10 (inches I assume?) which is pretty wide and you might see some improvement, but if it’s a narrower engrave higher speed slows the total job down due to the way it accelerates and decelerates.

Also be aware that engravable area decreases as your speed increases, so if you crank the speed you might find that your piece doesn’t fit the available area anymore.

Not all 10x10 engraves are created equal either. Take a 10” square clock face with numbers and pips surrounding a largely blank center. In those cases I find that if you can do the pips and numbers as separate vectors and engrave each one as its own thing it takes less time than if you engrave the entire face at once —the laser spends so much time traversing empty space if you do it as one big engrave.

Of course with a detailed 10x10 piece like a photo or detailed pattern, that’s off the table.

Basically all I’m saying is that the answer is “it’s complicated”.

Currently I’m doing the highest speed, 65 power, 225LPI and it looks great. I’m selling my signs for $15-20 per piece and I think that’s what people are getting stuck on. They’re mostly original art and design but I just set it and forget it once it’s designed. They were saying that I should be making $1 per minute but I can’t see anyone paying that for what I make.

Yeah if you care to share a pic of the art we might have more tips but if it’s a solid engraved area it’s hard to speed it up except by lowering the lpi.

One other thing you can do to make your engraves take a little less time: orient the bulk of the engraving in the horizontal direction. That can shave a surprising amount of time for some designs.