Engraving inside bowl of wooden spoon

I tried that and it engraves just slightly off from where I want it to be.

You’ll want to create a jig for engraving on uneven surfaces. The process for that is laid out here:

How to get focus correct when printing on multiple objects on bed? Everything Else

If you are trying to print on multiple oddly shaped objects, the best technique is to create a jig for it. (The Snapmarks require adjustment for varying heights as well.) To do that, you would place several fork outlines in a design, the same size as the forks, and give them a cut line. Then you place the engraving for the forks onto the file aligned with the cuts. Something simple like this works extremely well: [jig] When you bring the SVG file into the Glowforge Interface, you will cut…

Thanks Jules. So if I’m understanding this correctly, the actual material being engraved is essentially ignored by the GF, and you’re using the jig as a print reference. Am I correct?

Can you place it directly below the camera? The farther you get from the camera the more offset you will get. If you can’t do that because of it’s size then your best bet is a jig like Jules suggested.

Pretty much. The relationship between design elements in a file is ALWAYS maintained. So by cutting the cut lines first, you will guarantee that the alignment for the engraving will remain perfect with relation to the cuts. All you are doing is cutting out of one material, dropping your spoon into the hole where it was, and then the engraving is going to land perfectly on the spoon.

What should I set my material height to be? At its thickest near the top rim of the spoon it’s .44", but at the deepest part of the bowl it’s .135. Neither seems to align the design correctly. Also, what should my focal depth be? TIA!

Measure the thickness at the point where the engraving is going to be. (So in the bowl of the spoon.) I would average between the two. You will have about 0.25" grace, which is as much of a curve as the laser can handle without distorting it.

The thing to remember is you can’t use Set Focus on a curved surface. It will give you the wrong placement. Pretty much have to rely on jigs for those.

Hey Jules…I can’t seem to stop the camera from auto focusing…even when I input the focus height manually. Not sure what I’m doing wrong. Thanks!

What confuses a lot of people is that what most folks call Auto-Focus is only changing the screen view for placement purposes - setting the Focal Point for the engrave is different, and it over-rides the Auto-Focus if it is keyed in manually. What you are doing is making the focal point for the engrave land where it needs to…and what you see on the screen is not where it’s going to land.

You can use the Auto-focus during the cut stage on the cardboard - that is a nice flat surface and it should have no trouble.

If you feel uncomfortable about trying it on your spoon - run a test case on the cardboard cutout first. Take it out of the hole, put it right back in the hole, run the Engrave with a reduced power setting useful for cardboard (2% power) and see where it lands. If that turned out okay, change the settings for the engrave to match the wooden spoon, put the spoon in the hole, and now that you know where it’s going to hit…run the engrave again.

Just make sure you do not shift the backing material or the image on the screen, and you can drop one spoon after another into the hole for engraving.

Thank you Jules! I finally had success with my spoons after using your exceptional instructions. I think I spent more time getting the jig right than anything else. The other aha moment was realizing that I wasn’t saving my Illustrator files correctly (I had been exporting them as SVG’s rather than saving them as SVG’s.) Exporting them causes the sizing to be off by a mile. I also continued to tweak my speed, power, and LPI settings before landing on a final of Speed 900, full power (Pro), and LPI 270. My focal height is .28" and the material thickness was set to .3". Hoping it all goes well when I boot things up tomorrow. Thanks again! 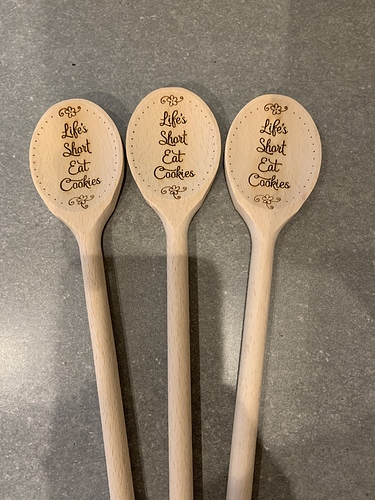 Those look good! Once you get the hang of jigs, they become real time savers.

This is the best explanation ever, @jules!

Those turned out great! Thanks for the update!

Another update. Since I powered off my system to return today, I took a screen shot for correct placement. I’m not touching the artwork…only moving the spoon into correct position in the jig. Having this reference photo helps a lot! 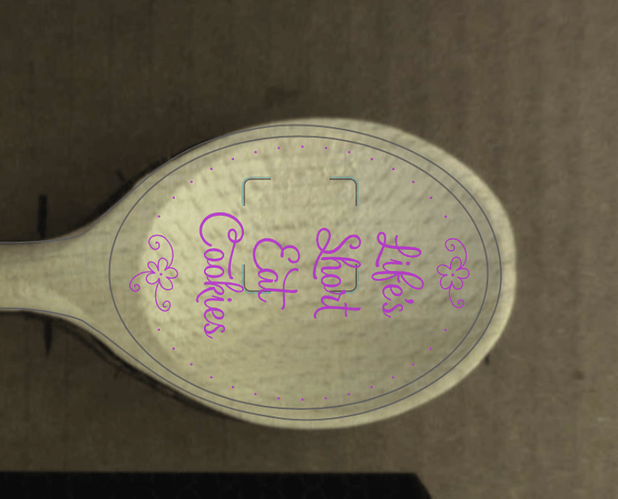 You can export as SVG but you have to make sure that you have Responsive unchecked. 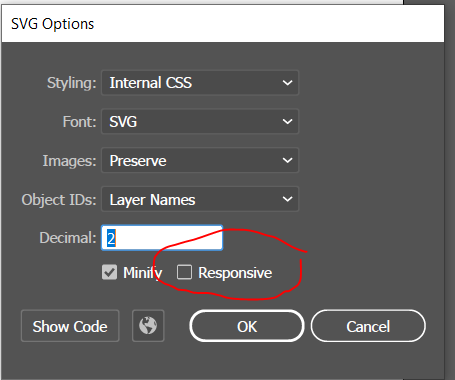 I am missing something here. Is this with or without the crumb tray in place? I tried it exactly as said with the Ikea spoons, but as soon as I hit print, the gantry knocks them out of the way. I removed the crumb tray and tried again, but they were so defocused that they were blurry.

Without the crumb tray you are going to need to elevate the material to a height of at least 1.35" from the bottom of the machine. If the spoons at their thickest are less than 1/2" you should be able to place them on the honeycomb tray… Did you have the handle of the spoon extending into the margin where something could hit it?

I will try again in the morning. I didn’t think the handles went that far. If not, I will elevate it and try again. Thanks.