@dlaituri posted about engraving metals and it reminded me that I wanted to try titanium. I bought a bunch of Titanium odds and ends and tried a few today. They worked a treat.

I grabbed a picture of the Gerber Shard engraved with our logo - it’s pretty cool looking in person. I also tried a few titanium sporks (that’s a thing, apparently) in different colors and they looked great as well. 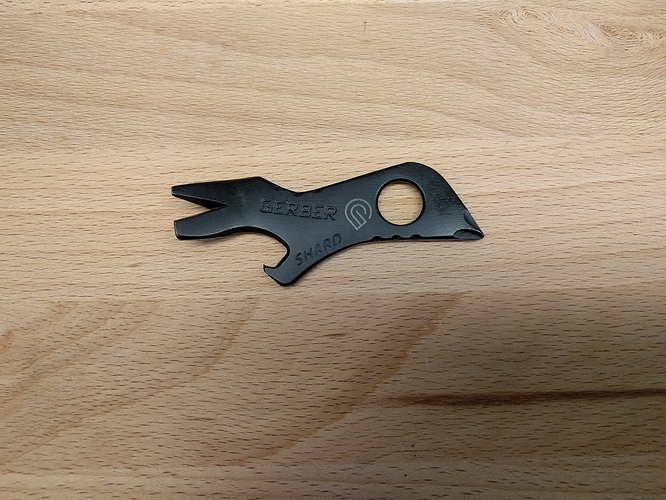 Thanks, @dan - very helpful! Looks anodized or painted - have you tried plain titanium?

Yes, titanium sporks exist and mine is now on my list of things to experiment with.

I would guess that it might lightly mark or texture the titanium, but you really are going to want to work with an anodized product to have it stand out like this.

Would it be possible to get some images of more curved surfaces being engraved?

Of course those are a thing - I carry one in my luggage on all trips. Never know when I might want to hit the hotel store and get a pint of Ben & Jerry’s

I’m going to engrave my name on mine now that you’ve mentioned this!

Raise your hand if you own a titanium spork.

Bought it almost 10 years ago, and it is still in the package…
because the package says Titanium Spork!

Titanium spork?? I must have one.

I am sure they are available in many places. Mine came from REI.

just found some on amazon

Mine was a Christmas present several years back. I think it came from Thinkgeek, but they are out of stock.
Here is the Amazon Link, and they have fun colors!

I think every GlowForge must now include a Titanium Spork.

Wasn’t this a reward that would get unlocked if the campaign passed $20M? pretty sure we all get titanium sporks… pretty sure.

Anyone ever have TSA troubles with titanium sporks?

I’ve never flown with mine.

Do you have any images of how the titanium sporks turned out? How does it fair with plain, non-coated, or raw titanium?

It’s funny, they freak if you bring a bread knife but up in first class they have full spread of knives & forks

They were kind of a mess because I was engraving the Glowforge logo on them repeatedly and haphazardly, so I didn’t grab any pics.