Does anyone have an insight as to why this engraving is dark and some areas and lighter in others? This is only my 5th time using the Glowforge, so I’m trying to figure out settings. I used 1000 speed, 40 power, 340 lines per inch, 1 pass. Thanks for any insight! 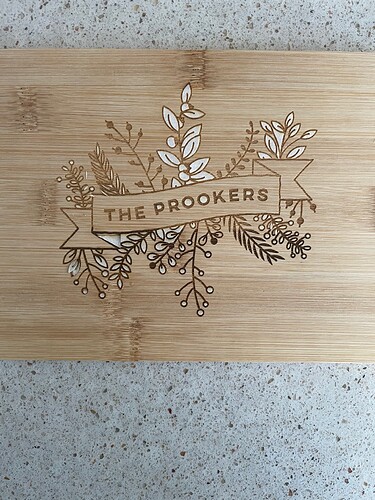 Going to guess it has something to do with the wood itself if the depth is the same. Perhaps some sort of substance on the wood? I know borax will cause even light engraves to be almost completely black (though it’s mostly just sooty).

Try a toothbrush or something similar and see if it’s soot that you can brush away.

I would have said variation in the material if the engrave difference was not bottom to top. It is almost like the board was not level, and the bottom of the board was slightly out of focus.

It looks like you are engraving bamboo and the variation in engraving is very typical of this material. You may be able to even it up by cleaning with a toothbrush and rubbing it down with food grade oil.

I don’t think there’s any substance on the wood, I just opened it and placed it on the Glowforge. I tried the toothbrush and it didn’t work, but thank you for the advice! I will keep that in my toolbox

Yeah @dklgood, that’s what I thought too, but I checked and it’s level. Idk, maybe I’ll try a different brand of cutting boards.

The board itself may be slightly warped. There is a direct horizontal line where the engrave changes from dark to light.

Aww, thank you, I think it is because I’m using bamboo. I’ll need to find a different wood.

Thanks @dklgood! I checked it with a caliper, but maybe I don’t know what I’m doing. I’m going to find a different wood.

That is a normal result with Bamboo. Not sure what variable accounts for it, but there are strips laminated together and each was in a different stage of growth. As suggested you may be able to scrub or scratch it out with a needle from the dark area to more closely match.

Bamboo is so interesting with this. Note that the dark is completely in the next section. Perhaps someone who knows more about this amazing grass can explain why some sections engrave darker than others. I speculate that it has to do with some different sugar levels or whatever is in the bamboo in different levels. Watching how they make bamboo sheet wood is pretty interesting. No guarantee that a section comes from even the same shoot. It’s not like a tree with pith and and sapwood. But this is one of the most dramatic examples I have seen.

As folks have pointed out - bamboo does that - BUT before you give up on it, know that you can flood the lighter areas with a dark ink to even up the look…first scrub it out well with water and a toothbrush, and after it’s dry pick an ink that’s the colour of the darker area and drop it into the lighter areas (a syringe can be really helpful for this!)

Thank you! I didn’t know that about bamboo.

Yeah, it’s super drastic and a letdown, but I’m happy to know that there’s a reason for it!

That’s an interesting idea, I’m off to Amazon to look for food safe inks! Thank you!

It is just the nature of the material. If you look closely the change is exactly along the seam between two of the laminations.

This is also a factor of using variable engrave in raster images and a low LPI If you are using dots and a high LPI each dot is the same depth and can be black. If the design is vector a deeper score will be less variable than a shallower one. In any case, one should not be cutting food on the engraved side as it can get foot in the lower bits that can harbor bad stuff.

All that said it is bamboo and a totally different structure than hardwood and will have one fiber burn darker than the one next to it so a highly variable color. If you have a tightly held down masking before you engrave, it is easier to use something to darken the engraving but even then the fibers can slurp up the color and have it appear far from where you wanted it. Letting it slurp up some clear first can lower that effect.

Edit there is more detail here

Engraving vector vs raster Beyond the Manual

There are a lot of differences between the two and what you are designing can be very determinative of what you do. If you are looking for a single depth hard edge shape like a logo then vectors are the way to go. If you have a family photo that you want on a sheet of wood you need a raster image and to use dots instead of variable engrave, and a fairly high LPI. A vector engrave… [IMG_20200309_152651x] Between barely scorched and blasted black is a very short distance and a variable engra…

I think you already have your answer here, but wanted to just ask if you’re sure it didn’t go over this part twice?

Reason I ask is that I was doing a rather large engrave and the power went off and on again really quickly, enough to stop the job. So I reran the job which went over the part already done again and ended up with a very similar result to how this looks. Mine wasn’t in bamboo though.