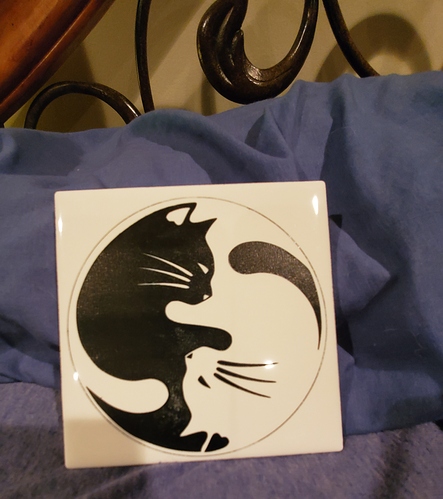 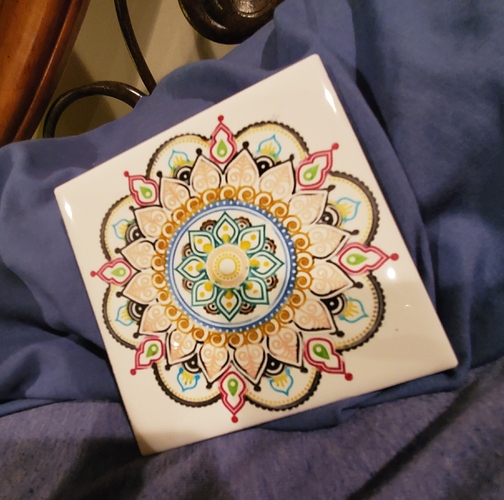 Could definitely be the tile. When engraving, you’re essentially removing the glaze, so if that is inconsistent when it was applied, you’d notice a difference in levels. Also when they were made, they might also have a natural curve to them, so the laser may etch them differently due to the height difference, it’s hard to say exactly!

I think they both came out nice. The mandala must have taken some real patience to color it so precisely!

You had me at “kitty.” Very nice job on both of those—amazing coloring on the mandala!

I agree with @raymondking32, the “insides” of tiles can vary from tile to tile. I have made quite a few tiles now and they are all just a liiiiiitle bit different. Yours came out great! I have noticed that they do tend to work a bit getter if they are more of a line art style, larger engraved areas can sometimes cause problems when removing the extra color from the glazed part of the tile. Looks like you nailed it though! Great colors on both

It could also be that the circle is too thin for the speed you were engraving. Very fine details like that can be underengraved if you’re going too quickly.

If I’m right the top and bottom might be better than the right and left sides, as the thickness of the area to be engraved would be wider at top and bottom as the circle approaches horizontal.

I had this problem when engraving my mink skull.

Probably the tile, as they are not exactly precision made objects, but there are several things going on that can have an effect on how much energy is deposited in any particular spot. My biggest question would be if Ying and Yang are rasters or vectors. If they are vectors, then you have the same amount of energy delivered and if it is not the tile (which it probably is) it is a speed and/or setting combination thing as evansd2 said. If the kitty twins are rasters, then maybe there is a shading thing going on in the raster image that is basically telling the laser more power here, less power there.

I haven’t made a tile in a while, but there were some where with large engrave areas where it seemed like they there were deeper.