I have an antique thermometer - from Appleton and Bassett-Boston. Came with our house. It has a frosted glass front with etched numbers and hash marks. I imagine that at one time the numbers and lines were painted black. I’d like to return it to this condition, but wondering how best to do it. What materials would you use to paint the numbers but not get paint all over the frosted part?

Asking here because it would be similar to painting a laser etched piece of glass. 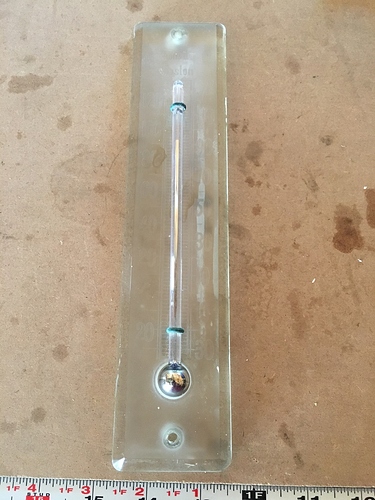 Would a scale and hash marks show through the frosted glass?

As far as I can tell, the etched scale was applied after the frosting, so the whole surface was frosted and then the numbers added. I suppose it could have just been a screen print and what I am seeing is just the “ghost” of the ink that long ago wore off.

Only thing I can think of is trying to find some frosted glass to do some testing on. Seems like you might be able to do it.

And I would wrap whatever you don’t want painted well with painter’s tape.

You may be able to use a sharpie to ink in the scale, and use alcohol on a rag with a finger tip to clean any above the scale off. I think the task would be easier if you could remove the glass thermometer.
You could experiment with an acrylic scrap before attacking the antique.