I am making some game pieces and would like to find an easy and cheap way to put a tint on normal brown chipboard. My goal is to make an obvious color change, but without making the chipboard too dark to show a score line. The coloring method also must be water-free so that the chipboard dries quickly and doesn’t warp.

I tried a few things today with mixed success. Hopefully one of you has a better trick.

The first thing I did was try diluting acrylic craft paint in 100% isopropyl alcohol, and brushing it on. This works in that there is an obvious tint, but it is hard to get even coverage. It’s just kind of ugly. 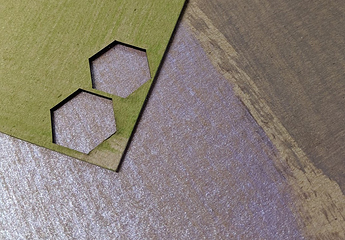 I then tried a bottle of “FolkArts Ultra Dye,” again diluted with 100% iso.

It took about 80 drops of dye in 1 oz of iso to make this tint. This went on more evenly than the diluted paint, and is tolerable, but not awesome. 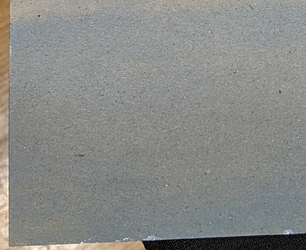 Then I found a spray-on fast-drying dye product called TINT IT by Design Master. This does work, but it’s $10 per can and I am not sure how much I will get out of a can. The price is not so bad, but it is a spray-on product which means that its hard to get an even coating, especially if the tint is very light. The sheet of green here looks pretty nice, but the red came out more blotchy. This was super duper easy, though. 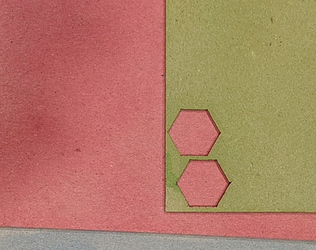 I can make do with the spray stuff but if anyone has tacked this issue I would like to know what you found. From what I have tried so far I feel like the best thing would be an alcohol-based dye that was cheap enough to make in a large volume, so you could dip a piece of chipboard and hang it up to dry.

Does it have to be chipboard? Could you adhere some cool colored paper to the chipboard before lasering? Or use matteboard that already comes in colors?

Ink pads? I sometimes use ink pads (used for some stamping) to color leather… but would recommend doing that on smaller pieces (e.g. after they’re cut out) for most consistent color saturation.

StippleGen LED - Universal Monsters Made on a Glowforge

Here is what looks like with the lights on. It is ridiculously simple. I just put a LED light strip in a box. [IMG_3431] [IMG_3433] At the bottom I made a “light maze” so that light won’t leak out the bottom. It has enough space to fit a ESP8266 so I can control it with IFTTT.

Not sure if it will score well. Maybe try two layers of contrasting paint, and try to only score through the top layer?

I’d go with artist matteboard. Comes in a phenomenal variety of colors and you can just kiss it with the laser to burn off the top layer & expose the core or burn a little heavier and get different colors from white through off-white to various shades of brown.

Does it have to be chipboard?

It doesn’t have to be chipboard–though I already have a stack of it, and it is priced right and cuts well.

@bwente, I will try spraypaint. It won’t dry as fast as that special tint spray… but it has the advantage of being paid for already. I have a lot of colors. Not too worried about the contrast. I will choose colors that will have contrast with a score line. These parts don’t have to be production-grade, just prototype-grade.

I had not considered that, thanks… Lessee… from a quick look at Amazon, color mat board is about $0.80 for 144 sq in and brown chipboard is about $0.50 for the same amount. So when you factor in the expense and hassle of adding color to the chipboard, the matteboard looks pretty reasonable. I’ll order some to play with.

I’ll order some to play with.

I get mine at the local art supply store. They have tons of it. Good pricing on sheets about 32x48. I just cut them down with a utility knife. I have a pro so I just cut it once to fit in the slot (16" wide) and feed it in but could cut it for standard bed sizes for a Basic.