Many people on here have external fans / exhausts to help airflow / and also keep down noise levels in the room the GF is in… but all have an external switch, I am thinking since the internal fan is 12v and only goes on when a ‘job’ is starting, why not just add a 12V relay to it, Job starts → 12 v to fan circuit → Relay triggered → button push (from 1v to 120v)

that would probably work. I have a wyze camera aimed at the forge to turn on the external fan when it sees motion (i.e. me opening the lid). Driven by IFTTT

yes that is correct - you would turn that back ‘on’

The exhaust fan is permanently powered. Its speed is controlled via the PWM input signal, and although that does indeed go to 100% (DC) while operating (i.e. it is not variably controlled), the control circuit almost certainly can not source enough current to drive a relay or similar. So you would need a circuit capable of converting the PWM signal to a suitable level for driving a relay. Technically, the way it is being used, that could be as simple as a transistor, as long as they don’t change the way it’s being driven (i.e. use the fan’s PWM speed control as intended by the manufacturer),

TL;DR - this can be done as things are today by utilizing the PWM speed control signal (yellow) with a transistor/MOSFET circuit.

I’m an EE. I prefer to use a WeMo smart switch, and just tell Alexa to turn on my Glowforge fan.

fair assessment, I think they control fan speed with amperage, not voltage.
I am a geek, no certifications, or training, just years experience causing fires and voiding warranties.

I suggest you look at the data sheet for the fan (or any other, for that matter.)

External “amperage” will have no effect on fan speed. It has its own internal drive circuitry, it’s not an analog device.

Lots of ways to do this, but all require some knowledge of electronics.

I’d just use an Arduino to sniff the PWM signal going to the fan (or not, if you remove the fan), and some simple code to drive a solid state relay when the PWM duty cycle exceeded whatever threshold was needed.

Since Arduinos get used for this sort of thing all the time, there are probably existing “sketches” you can leverage or just use outright.

I have been leaning on the tech dept at Glowforge to open up IFTTT access, that when glowforge does “X” “Y” can happen…

This is incorrect. These fans use PWM, or Pulse Width Modulation. The power is provided in a waveform, a series of high frequency on-off pulses. The frequency of the pulses causes the fan to spin at a certain speed. This is also how LEDs can be driven at different brightness levels even though LEDs should be driven at a constant voltage. If you have taken a video of a PWM controlled LED light it often looks like it is flashing even though you see it as solid. This is especially apparent with many of the new LED headlights and taillights. The camera “sees” the periods when the LEDs are off that our eyes can’t see and interpret as lower brightness. Same effect with a fan, but because the fan has inertia to overcome the off periods it spins at a lower speed.

and according to that information:
Pulse-width modulation (PWM) is a common method of controlling computer fans. A PWM-capable fan is usually connected to a 4-pin connector (pinout: Ground, +12 V, sense, control).

so as I said in my OP – a relay on the 12v / ground to trigger and ignore the speed / sense control.

A relay will not work by PWM because of its mechanical components. If you use a pure solid-state relay you might be able to get it to work but it will depend on the response frequency of the relay. These are expensive, usually of low capacity, and will pass that PWM signal along to the controlled component. Since the power line is pulsed you will not have a constant signal to use with a relay.

PWM can be used on two-wire, three-wire, and four-wire control systems. The additional wires provide control feedback. The PWM signal comes over the power wire.

I am so aching to put a VOM to my forge… but not till its out of warranty!

That is exactly what I do! Smart plug to the rescue!

I wouldn’t want my external fan to turn off and on with the internal fan. I leave the external on as long as the gf is on. If I’m doing a particularly stinky job I leave the scraps in the gf with the lid closed after the job completes. The external fan draws out the residual smoke/odor reducing the smell in the shop to near zero.

My gf and the external fan are both plugged into a smart outlet. I leave the gf power switch on and turn them both off and on with the outlet controller.

Yea, you have a great point, I joke that my neighbors don’t know if I am having a BBQ or making meth by the smells my GF outputs! - I gotta have a think about this, and add like a 5 minute delay to the relay.

On the Trotec, they have a duration field you can enter that will run the fan for job + user specified duration (seconds) — people generally use 30-60 seconds.

There are also existing current sensing tools that are meant for very similar things to this: 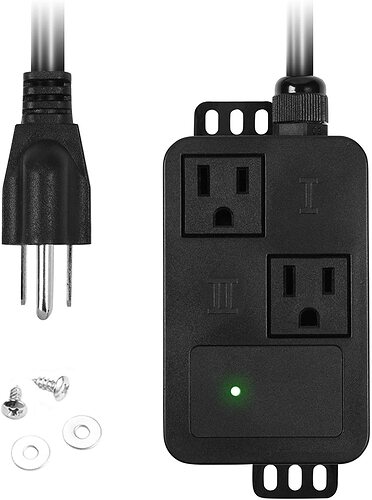 That’s just one example. I don’t know how good or bad it is.

On the Trotec, they have a duration field you can enter

This feature (manual fan control) has been requested many times for years now. I guess it must be much harder to do than it might seem, but boy does it seem simple from the outside.

all have an external switch

Not necessarily.
My power circuit comes out of a 2 gang box I built. When I turn on the switch side the receptacle side becomes hot and turns on the GF and Fan.
I am sure there are commercial versions for those not electrically skilled. 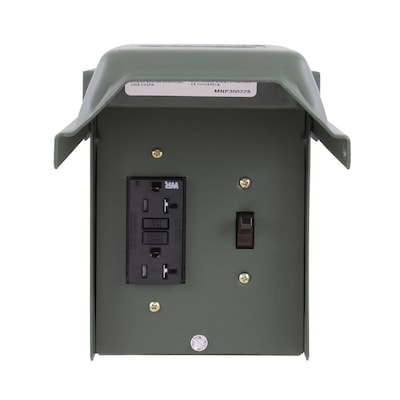 Shop GE 20-Amp 1-Pole Non-Fusible Enclosed Molded Case Switch Disconnectundefined at Lowe's.com. Put power where you need it with the GE 20 Amp backyard outlet with switch and GFI receptacle. Made of corrosion-resistant steel. The outlet's compact...

This is the closest I could find in a store and is kind of overkill, but it gives you an idea of what a 2 gang box would look like once made and all you would need to provide is a cord to plug into an existing circuit…
Also note, if one side of the 2 gang box is a switch/receptacle then you would have 3 places to plug into instead of two, but I wanted a heavier duty switch than is provided in the switch/recep combo receptacles.

Any of the smart wiring devices common today would do the job, or so I would imagine.
Goal is simple. Two circuits on/off from a single switch.