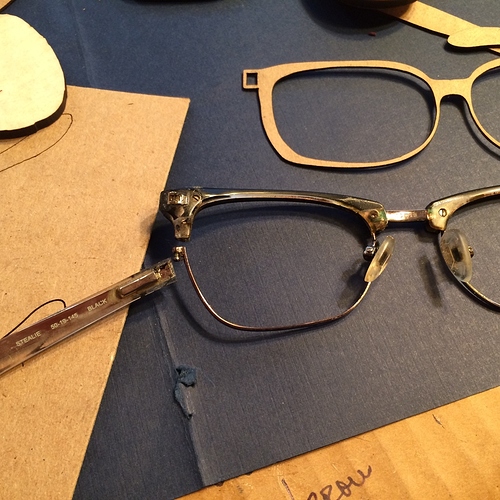 I have an old pair of eye glasses. The temple piece was broken off. I had been thinking about doing some specs and after the wooden sunglasses video of @iliketomakestuff, I thought I’d gave a go at it.

My first try was to do a trace and print. I hadn’t done too many of these and I need to get more familiar with it if I ever have to make a violin bridge

at a moment’s notice. 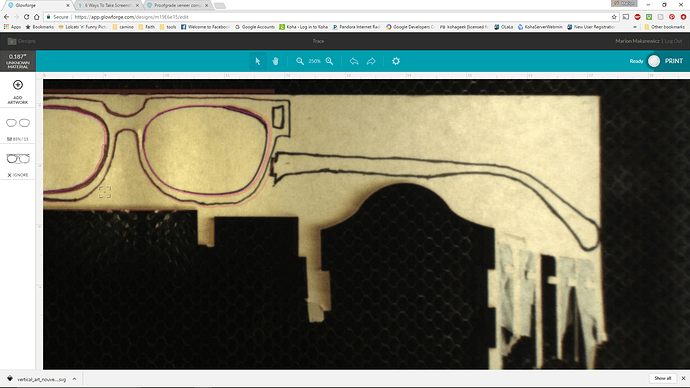 There is a problem here. I have an outer trace to cut and an inner trace to cut around the lenses which I removed from the old frame. I was able to get the lines I needed, but if the operations that were left were one cut and one trace. I was unable to convert the inner trace from an engrave to a trace. That is something I had run into before but never really followed up on it.

So if I were to do the whole thing by trace and cut, I’d need to cut the lenses holes out first it one operation and then rescan the frame to a new trace the outer edge of the frames. I think I could do this and avoid any design software but I decided to switch gears and use Inkscape. I redrew the frames and then scanned that in with my wand scanner and traced it. I simplified it and tweaked it. 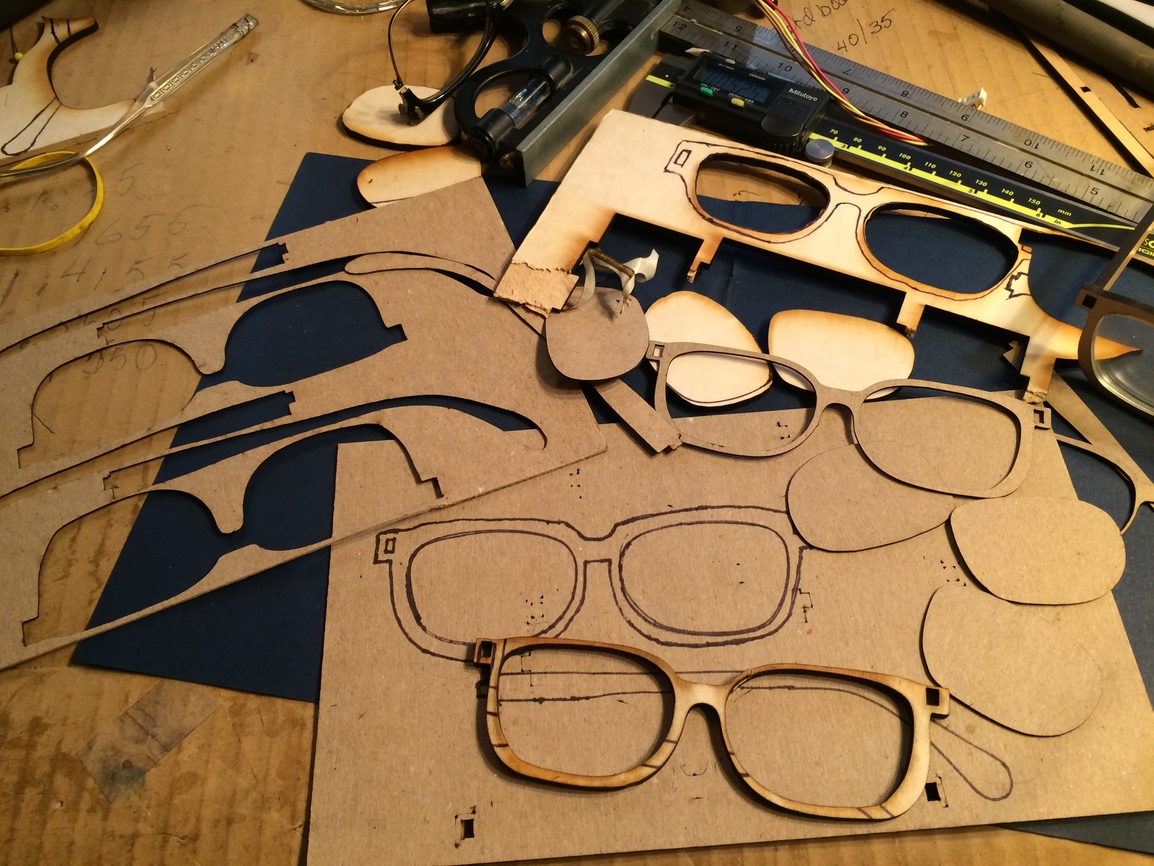 I used the chipboard for a couple iterations to tweak the lense cutout. Then I did one set of frames in wood. This was the last of the maple MDF that didn’t make it out of beta Proofgrade testing. Good enough to test but it did break apart when I was popping the lenses in on one side.

Final tweaking of the design and did a print in maple proofgrade plywood. 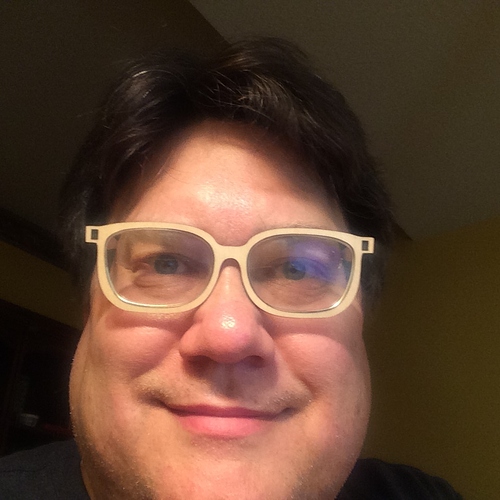 It is all a press fit. They work just fine, although I need to get some lens cleaner on them. Pretty grimy putting them in the frames.

I didn’t worry about folding them up so that made the design a bit easier.

Super fun project. I must say that the parts where you point out issues with the trace workflow and the “MDF that didn’t pass proofgrade” were really enjoyable.

My wife has already told me that I have to make her a custom set of sunglasses!

Wow, that’s fantastic! I really admire the tenacity you demonstrate in your projects.

Simply put, those are rad! Most excellent work!!

Great project! Thanks for the tip about the tracing, too. That’s one of those issues that’s hard to get a feel for until you are immersed in using the machine.

There is a problem here. I have an outer trace to cut and an inner trace to cut around the lenses which I removed from the old frame. I was able to get the lines I needed, but if the operations that were left were one cut and one trace. I was unable to convert the inner trace from an engrave to a trace. That is something I had run into before but never really followed up on it.

If I understand correctly, the solution is to click on the background and both glass openings. That will give you the cuts you want. Just set the engrave to “ignore”.

But daaaaang! Ignore me, because what you did’s way better! It looks awesome on you!

Nice job. Think I’ve got an old pair of wayfarers knocking about somewhere. The lenses are fine, but the frames broken. Can feel some Walnut frames coming on.

Thanks for the tip. I am going to work on that again. It does seem possible but I don’t quite know all the different ways to click and get results.

It definitely works choosing which side of the line to cut. That is pretty nifty.

So cool! Love all these knickknacks that are being made on the Glowforge!

This came out great. Thanks for sharing the process.

AWESOME! This is really , nice job!

They came out great! I’ve got some glitter if you want to dress 'em up a bit.

Nice job! I am surprised you didn’t opt for the little palm trees on each side ( or maybe a flamingo silhouette…

So I used this design to make my husband his own solar eclipse glasses. He can also look for sun spots, or how near venus is, or whatever. Bought solar filter film and cut the lenses from that. He’s VERY happy with them. 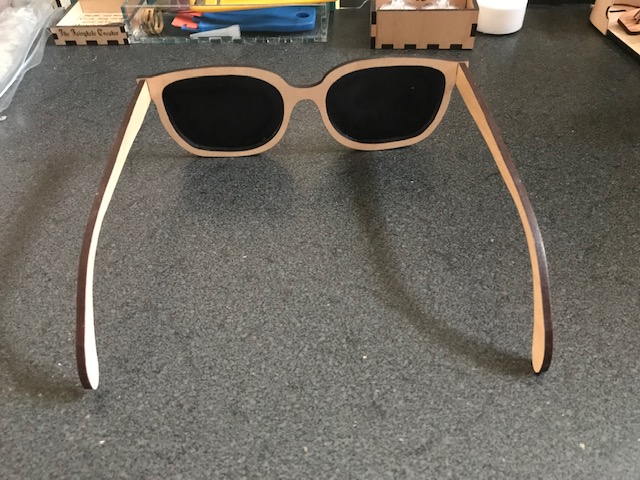 Nice!
Where/when next to use them? The last one went right through Nashville where my Son lives so we made it our business to be there. It was my first total - and it was amazing!

December, if you’re wiling to travel to Argentina. https://www.timeanddate.com/eclipse/list.html

I guess it is just a astro/telescope geek thing. He’s just happy I made them!

Looks like you will have time to design them before you need them.