Sweet, @aeva, I was hoping I might be able to do something similar with bandanas that I occasionally make. Something in the steampunk theme. I’m sure cutting the fabric will also be fun! 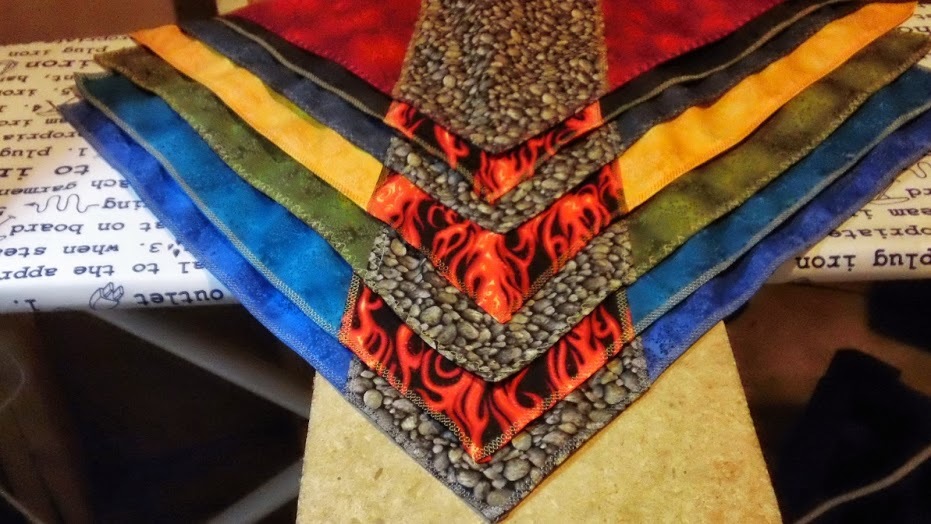 Neat. Does it work on wool too? How about silk?

I’m unsure of silk, but wool gives off cyanide gas when burnt, so I definitely would not try it.

Note to self, tell sheep to stop smoking…

I’m not sure the levels of cyanide produced from etching wool would be concerning especially if venting to the outside. It seems to me the big concern is when large quantities of wool are burning such as in warehouse fires. Though I’m not telling anyone it’s safe. I may or may not do it myself😇

I’m not sure the levels of cyanide produced from etching wool would be concerning especially if venting to the outside.

Curious about this as well.
ponoko sells and laser-cuts wool felt. They have a warning about how bad it smells while cutting, and links to methods of cleaning the smell out of the product afterwards. From what I understand, the cyanide fear is from large quantities burning as @tbelhumer mentioned, and from low-oxygen burns (smolder).
A lot of modern felt is not gonna be anywhere near 100% wool (and it may not be wool at all: if you get it at a craft store it is probably recycled P.E.T.)
Maybe someone who is more… science-y… can add a thought to this.

Lest we get too far off into woolgathering: Instructables has a few on fabric etching. Lots of curiosity on the forum but not a whole lot of experience has come forth. There was some good stuff on denim here:

Does anyone know of a way to make marks on fabric with something akin to Cermark? Everything Else

You can do that with denim as is. It doesn’t look scorched, it comes out white. From a quick google search, it looks like people have done it with shirts as well. Not sure what the results will be, you may have to experiment.

maybe @Auntimame can give us some insight?

I wish I had some insight to give!

Even though I spent many years as a quilter I never attempted fabric etching. I’d known about a method that worked on cotton/poly blends but, alas, never tried it: a paste that dissolved the organic fiber(cotton) and would leave the inorganic (poly) behind. https://www.youtube.com/watch?v=U23iYNGuxrA

I’ve seen this done with lasers and it’s amazing.

Exactly what I was thinking.

From what I understand, the cyanide fear is from large quantities burning as @tbelhumer mentioned, and from low-oxygen burns (smolder). A lot of modern felt is not gonna be anywhere near 100% wool (and it may not be wool at all: if you get it at a craft store it is probably recycled P.E.T.)

Having just spent an hour or so using my limited google-fu to research this, I think @jbv summed it up nicely: you’d have to burn a hell of a lot of pure wool in a low-oxygen environment to generate cyanide. Mostly the issue seems to be related to house fire where carpet or insulation is burning,

I think this is cool(while taking in the fear and caution of burning). I am looking into personally designing things for my clients, friends, and family members.

I wonder if I purposely setup more than one pair of jeans in the forge, could it do multiple items as it did in the video (the airplane cut out)?

I should have gotten the pass though slot…

I have done Chuck Taylor sneakers. I engraved the company name/logo into the side. My laser has Z-axis control though.

Had to set them on their sides held in place with 123 steel blocks. I leveled the shoes with small wood scraps under the toes (otherwise the shoe rests at an incline on their sides. Added wadded up paper towel inside so they stayed open and the sides flat.

I used a low power (30% on a 60W laser) and high speed (400mm/sec). They burned a “scorch” into the fabric . Nice toast color on white sneakers. There is a little depth to the engrave that can be felt with a fingernail.

The GF won’t be able to do sneakers, but those settings might be a place to start with other cotoon canvas or denim items like pants, jackets or shirts.

Fabric is one of the main things I’m hoping to do–can’t wait to start experimenting! Shoes would be so fun…

Custom engraved leather shoes, or even just the front/toes… for people who only have 2" high shoes…

I have a couple pair of warn out shoes in my Glowforge experimenting pile in hopes of finding a way to clamp them down to 2" or less.

Or override the interlocks on the front door and have them hang out the front!