Last night I was showing my GF off to a bunch of people, and one of them wanted to trace a leaf. It was very green, and appeared to contrast nicely with the white background we put it on, but nuh-uh. The trace was lousy, with all kinds of border messiness now matter how we played with the contrast/brightness setting.

And then it occurred to me: if you could figure out a way to tell the software (essentially) “this hue is black” the usefulness of the trace would be much improved. The information is already there, it’s just a question of telling the GFUI how to use it.

Not the answer you are looking for but useful nonetheless.
The built in scan is very cute and sometimes useful but either a flatbed scanner or a camera is your best bet right now.
Get the images to your computer and then use a photo editor to do just what you ask for.

More accurate, true, but not going to work in a demonstration workflow. Especially when someone else’s object-for-trace has just zapped beautifully.

but not going to work in a demonstration workflow

There are such trace functions available as Android Apps that you might get directly to GFUI though I have trouble getting a sync. but I put the photo to the Google and copy it to the computer easily enough. Unfortunately, the GFUI makes an outline engrave that lacks any detail and not a photo that it could do a much better job with. I made that point and complained about it months ago but got little hope that would change.

Any other system that just took a photo would be way ahead, but the GF has not gone that way however easy as that might be. so if you want to make that demonstration workflow you either need to make it as simple a workflow as you can or make excuses until @dan decides that the way it works is too embarrassing and adds the acquisition of an actual photograph from the camera to the automatic actions. even a screen capture would do.

Actually, if you took a snap of the leaf in Adobe Capture on an iPad, you could print straight to the GF from there. It doesn’t really get much easier and you can do some simple editing before sending it to print.

I have no idea how you would represent the option,

here’s how adobe PS represents that function in the levels pallet: 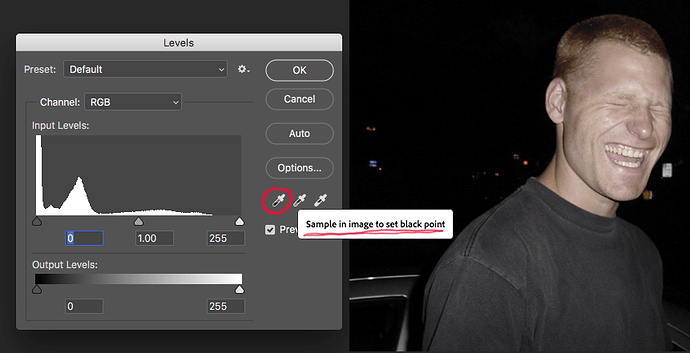