Longtime lurker and once-in-a-great-while commenter/poster, but this is my first real post with something to show!

After ordering in October '16, I finally received my

Basic back in March, and sadly I had been unable to set it up and use it until recently. However, this combined with the already extended wait has given me plenty of time to come up with a LONG wish list of project ideas.

After the Founder’s Ruler and Gift of Good Measure, my first project was a new sign for my wife and her coworker’s office door at work. We’re all big Eagles fans so including their logo was pretty much mandatory. 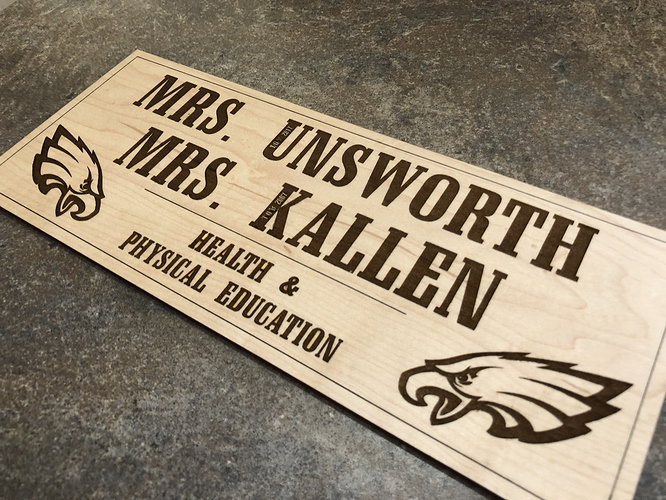 Used my first piece of

Medium Maple Hardwood and I was very happy and encouraged with the quality of the engrave. The sign came out to about 4" x 10". The photo is a little blurry, and it was taken before I located my Gorilla tape to finish weeding the tiny bits of masking tape. Both my wife and her coworker have both been Teacher of the Year in their district at different times, so I included a little “T.O.Y” and the respective year in the first letter of each last name. Some of the masking is still there in the photo so its hard to tell but the letters were very sharp and clear once it was all weeded away. Even the little periods between letters can be seen - I was really impressed by that.

Finally, the Mother’s Day present I made for my mom - special thanks to @marmak3261’s post from over a year ago that originally inspired this idea:

Since I saw this it has been one of my top project ideas for once my 'Forge was finally delivered, and I had just enough time to make it happen for Mother’s Day: 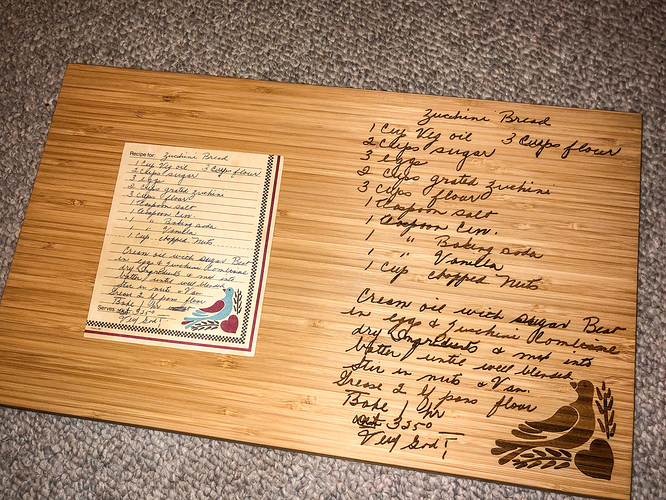 The recipe is handwritten by my grandmother, and was one of her “signature” recipes. You can see in the photos that the original recipe is a bit “seasoned” and has some staining, but nothing too bad. Took quite a bit of cleanup but Illustrator’s Image Trace feature is pretty much the best ever and saved me a TON of time. Thought the bird image in the corner was a nice touch so decided to keep it. 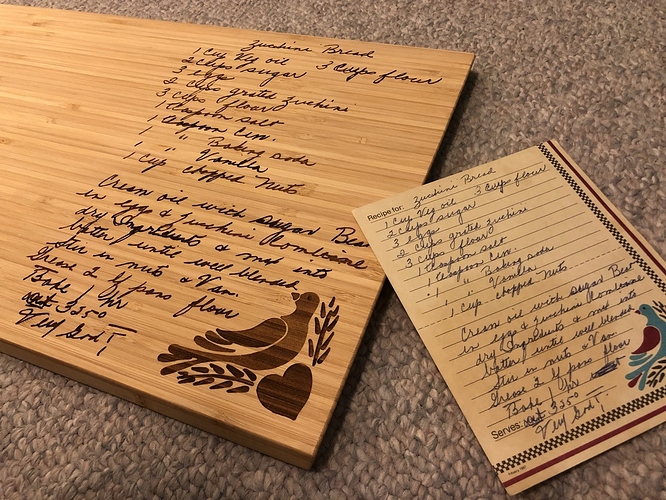 IKEA “APTITLIG” bamboo cutting boards - I did try to vary the power for the different shades of color in the bird image, but with the way bamboo engraves it was difficult to see the difference in the final piece. Some sections of the bamboo end up darker than others regardless of the power or speed setting. Still very happy with it and Mom loved it! I also made one for my sister on the smaller APTITLIG board.

Some things I learned:

Now I just have to wait until my aunts see it and I’m sure I’ll be churning out a few more!

If anyone has any suggestions or recommendations of what might help improve the process next time (different brand of masking tape, maybe?), I’m all ears! Any and all comments are appreciated!

Awesome projects! I like the way the engraving on the bird turned out.

I just got a couple of those boards and now I know what to do with them. Thanks!

I just love what you created. I have many little notes from my parents. This inspires me. I’ll share when I do. Thanks

Nice work! so glad you are putting it to good use finally.

LOVE IT! Especially since it’s in her handwriting. It will be treasured.

Looks Fantastic! Any chance you remember your settings?