Okay for a person who knows nothing on lasers, I’m going to attempt my first non-proofgrade engrave and… no idea where to start. I want to mask the attached and have my kids draw on them and then use the trace function.

The snowflake is the backside. They are 3mm thick Should I use proofgrade MDF settings and go from there or is there anything else I need to now to tweek?

I’ve never cut/engraved MDF. I understand it can vary quite a bit, (including glue composition, which may or may not be laser safe), but if you are looking for a starting point, the equivalent thickness for Proofgrade materials are as good a place to start as any.

Just do a few small test rectangles first before committing to artwork.

Yes a photo would help 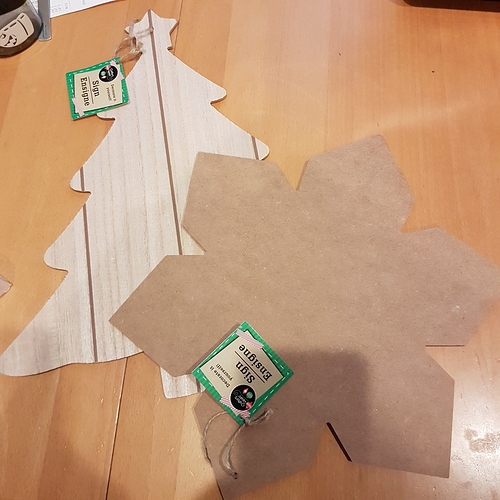 Hmmmm… It looks like MDF. Hopefully the front side doesn’t contain anything dangerous like PVC. Probably, just paint though.

MDF releases stuff you don’t want to breathe but so does PG, non PG may release stuff in higher quantities (formaldehyde, cyanide, etc.) but if your ventilation is good, probably ok especially since you’re talking about engraving.

I’d probably try draftboard settings to start, but I’d probably dial it back a bit since it’s easier to get through my masking material. I’d definitely buy an extra one to do an experimentation pattern on to get the contrast I want.

I confused mdf with daftboard terms thinking they are the same thing… The front is laminated. Okay - I’ll have to stick places that we can validate the materials. I just though these were cut and then remembered…jist because it looks like wood doesn’t mean it’s laser safe

Draftboard is mdf, but they pay special attention to the glues used to make it. Non-proofgrade mdf can use pretty much anything in its manufacture. This means that draftboard settings are a good place to start, but could also be way off. It is also where the concern comes from.

It looks like what you have there is mdf with a facing applied to it. The proofgrade plywood (and some other thin plywoods I’ve seen at big box and hardware stores) is basically a thick-ish layer of wood veneer with an mdf core.

This makes sense. When I bought it I thought it was okay but then I realized that wasn’t really wood

We’re talking about your kids here, so all precautions are warranted, and nobody will suggest something that might endanger them. Everyone’s risk assessment is necessarily personalized. If I happened to have this piece of material… and if that’s just a thin layer of paint and not some sort of plastic… I’d go for it. Dosis facit venenum, after all, and I can probably tolerate a few extra molecules of formaldehyde on special occasions.