Since having my Glowforge for a couple of weeks, I’ve found it very helpful for many “honey-dos” for making patterns and props for my wife’s upcoming Lion King theatrical performance. (Thanks for the abundant community ideas here for helping us successfully cut fabric, EVA foams, and corrugate.)

Here’s my first weekend for a from-scratch enjoyment project as a gift for our friends who just lost her puppy this week (who we regularly puppy sit and was our chihuahua’s daddy).

I wanted to ask a question about Proofgrade engraving, as well as share my idea. 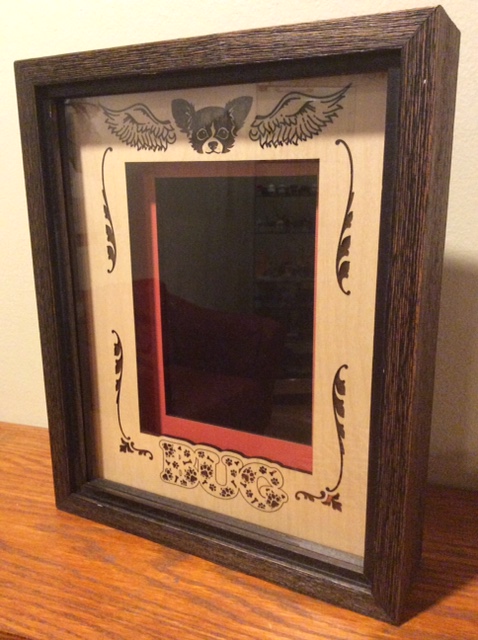 Proofgrade engrave tuning question
I ran some sample tests on draft board and then did the final burn on PG Medium Maple Ply. I found that the engrave (SD) went darker and deeper than expected, so wiping up soot made the color a little uneven—though I still am happy. It was just unexpected after the draft tests. I designed this as a vector in Illustrator, and spec’d it at 100% black. Should I choose a lower percentage of black were I to want to get this a little lighter colored and not quite so deep? (It came out about 0.040".) 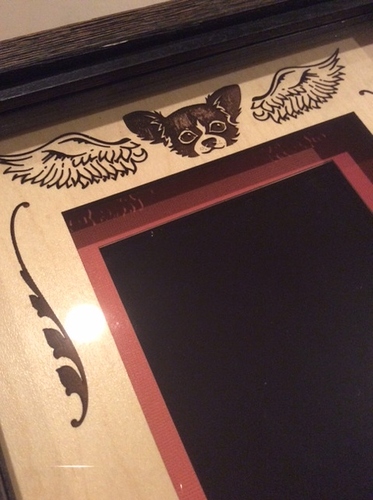 And here’s my idea for precisely fitting offsets for the shadowbox contents to fit snugly together
In case the idea is helpful to anyone else I’m sharing what I created for offsets to make the shadowbox depth layering hold the first maple matte up against the wood holding it away from the front glass while keeping the second matte held against the back where, upon opening, it is easy for our friend to add a picture of her beloved Bug. The second linen paper matte is cut to rest atop a PG Draft Board backing, that received the platform pins, also of Draft Board. With kerf adjustments for the pins and the platform pieces everything fit together snug enough that glue was not needed—just a light tap from a small rubber mallet.

Such a joy to have such convenient precision at hand! 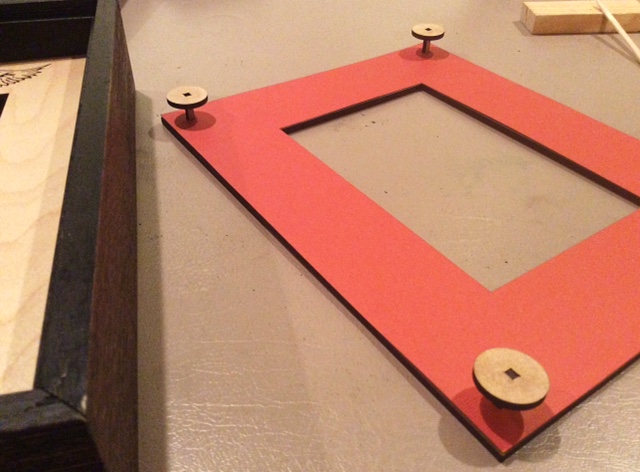 What a great idea to use the pins on it as spacers! (Nice job on the frame too.)

Sorry about her puppy tho.

Thanks. Bug (at right) was one of our favorite furry friends to have come stay with us and T-Rex. 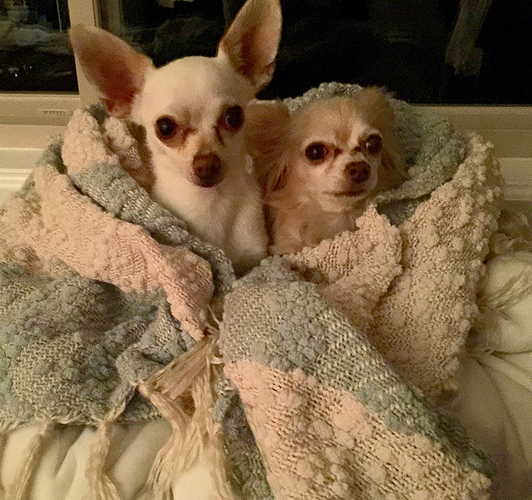 Yes, T is ours at left. She was named Flurry by her breeder because she was born on Christmas—but when we bought her a couple months after her big attitude needed something bolder. (Love when people say that’s not much of a girl name as if there were only boy tyrannosaurs.)

Either way, she’s got Alpha grrrrrl power around my son’s husky mix dog—though she adores kiddies, and didn’t boss Bug around too badly when he stayed with us.

She’s a cutie. My mom is wanting a chihuahua (or other small dog). She had to give up her two Havanese because they had gotten a little too big for her to handle. (She gave them to a very reputable dog owner though, who had fallen in love with them, so they’re probably quite happy.)

We had a Bengal cat before we got T, and I swore I never was a dog person—and even if I were I definitely was not a chihuahua person. But we worked to socialize her around kids and other dogs, so besides having a big alpha attitude for being only 3.5 pounds, she’s trained me on liking dogs and chihuahuas. Now we’re regular puppy sitters for various friends— and she keeps them all (mostly) behaving well.

I am fostering a little Chihuahua right now! She’s super cute and friendly. It will be hard to give her up. 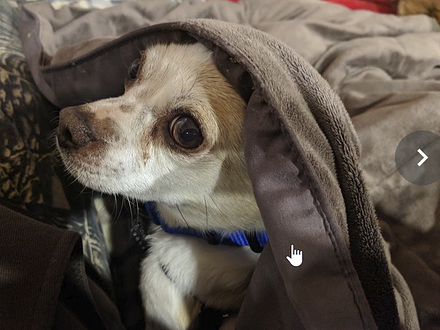 I love the shadow box offset idea—thanks for sharing!

Very cute little dogs. We were greeted by a teacup version in a gift shop once. He was a scrappy little fellow. He kept dropping a stuffed wiener dog on our feet that was bigger than he was. Although fully grown, Zeus was less than 1.5 lbs. Adorable!