This is my first custom design that I used to distract myself from a thousand failed map prints. As a thank you to the community and everyone else that has posted their work here, I would like to make my first design available as well. Currently, I have about 4 hours into this design and although I haven’t even glued it together yet, I have assembled it (with tape) and tested it out with every can that we have in the pantry. It seems to be effective in it’s current form, but I do have some more changes to make that I’m planning on working on next weekend. I just thought I would toss it up now since everyone seems to have a surplus of canned goods to prep for the apocalypse.

Please feel free to make modifications and/or improvements as you see fit.

Settings: Cut @ 180/full power.
Planned changes:
Extend roll-ribs further along the floor, towards the “first out” window.
Join front of feed-ramp to faceplate
add a slope to the bottom floor if roll-ribs don’t do the trick
extend “first out” fingerholes in sidewall another 1" towards the top
Reinforce bottom faceplate for Mach IV Campbell’s soups 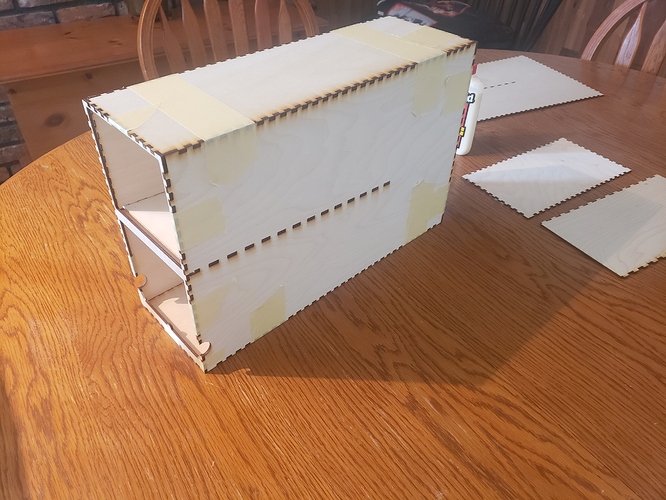 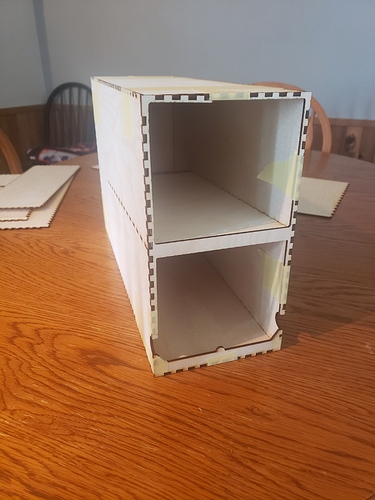 Excellent! (Lets me off the hook for a rework!)

I have been working on something similar for a while now and it has been a fight, to say the least! Thank you thank you THANK YOU!!! (And my wife thanks you as well

@Jules - Are you implying you already made one of these?! I used all the google-fu I have at my disposal to try to find one someone already made without any luck!

Oh yeah, I had it pretty well hidden…I think I was talking about the battle to organize at the time. (It was just a display though, it would need a lot of rework before offering it as a freebie. Which I haven’t had time for. So it’s great that you have one already available!)

I had the same thought about uploading mine, then I figured “If I don’t do it now, I’ll never do it because I’ll want to rework some stuff before uploading”. Critiques are helpful to a rookie anyways, so figured someone may take it and run with it.

I’m enjoying this a whole lot more now that I can get my CAD designs in here and scaled correctly. Got a long ways to go on Inkscape and the designs themselves, but progress is progress!

You seriously need to stay out of my head…
I was just wondering if someone had made this, but couldnt find it on a search.
Someone on the FB GUG linked here.

I just made some additional changes to the SVG file, but I won’t be able to test them out until more plywood arrives next week. If anyone plans to build one of these but hasn’t started with the first file yet, can you please use this one and provide some feedback?
Download link: https://drive.google.com/open?id=1lq4jyRbFiloM_wQMd2YnybwE7PKE8Qzs 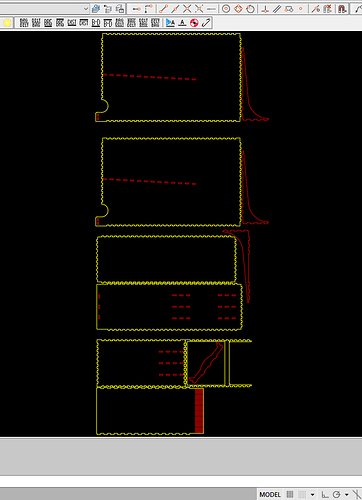 Sure, will do. Tried to print version 1.0 last night but used 0.20 inch material instead of 1/8th inch … you can imagine how that went

How strong is this?
was wondering if there was a 1/4 version?
Since it is near impossible to get 1/8 in Waco, TX for some reason…lol

I haven’t cut out v1.1 yet, but the first one I posted is strong enough when chalked full that I didn’t feel compelled to switch over to 1/4". The feed ramp adds a good bit of stability to it.

The faceplate is pretty thin and flimsy, but I didn’t see an issue with that except on the lower section that catches the cans. V1.1 should have addressed that issue, but I’m waiting for an amazon shipment to arrive before cutting that one out.

I’m enjoying working on this one, so if other people cut it out and provide some feedback, I’ll keep reworking it for awhile.

Nice project! Very kind of you to share your work!

The feed ramp adds a good bit of stability to it.

Did you think of using a slight slope for the bottom layer so it feeds them forward (maybe a V1.2?) so the cans don’t get stuck in the back when you don’t have a full sleeve? The other thought I had was adding some long slots in the sides to provide a “viewing window” to see what the contents of the storage box was - you could see how far the cans fill it. Might be a series of slots so it retains the integrity of the sides for stiffness.

I like your idea about some viewing spots which would come in handy to see stock inside, though you could probably just look into the top row and have a ballpark idea.

I know when I make an organizer/can roller there will be several side by side (i.e. tomatoes, soup, refried beans, etc.) and on a pantry shelf so the side viewing holes wouldn’t really help but everyone’s storage areas will be different.

As far as the faceplate area that catches the cans, I have two different ideas:

Just a couple of ideas before I have had my second cup of coffee. This is something I have wanted to do since I got my GF, but my Illustrator skills were lacking and lack of time. I had actually thought about using my 3D printer to create ramps in the back of the can organizer to make the cans roll.

Being I am who I am…I would probably measure each one of my cans and make them fit them and label them accordingly…guess that step comes later … my thought kept going back to “tuna cans” and how they would probably fall over and play dead.

Can’t wait to see how this works out…I just love this community and the sharing they do.

TLDR: I haven’t had my second cup of coffee yet.

Thanks for the input!

@jamesdhatch - I did start adjusting the bottom panel to include a slope after my first test print, but I switched over to the idea of the 3x roll ribs because I thought it might be a better route to take to absorb some of the impact of the falling cans. I was also a little concerned about that impact breaking the tabs of the bottom panel over time, so I went with the roll ribs instead. I’m not married to the idea so I can switch it up if need be. I’d like to try v1.1 and see how those work first, possibly extending them even further towards the front.

As far as the viewing window goes, I can add one of those pretty easy if you want. Could probably use the cut-out for the roll ribs to save a little material, too. Like the post below yours though, the way mine are set up at home means the side panels aren’t even visible. I’m placing mine on a metal kitchen rack that’s set into the wall 16".

Really enjoying the suggestions on this, thanks all.

Is anyone aware of a design concept to keep cans in the top feed-in portion from going a little sideways and catching on the side walls? I was thinking something like highway barricades that are designed to catch a car’s tire, which would walk up the barricade and be “thrown” back into the lane of travel. 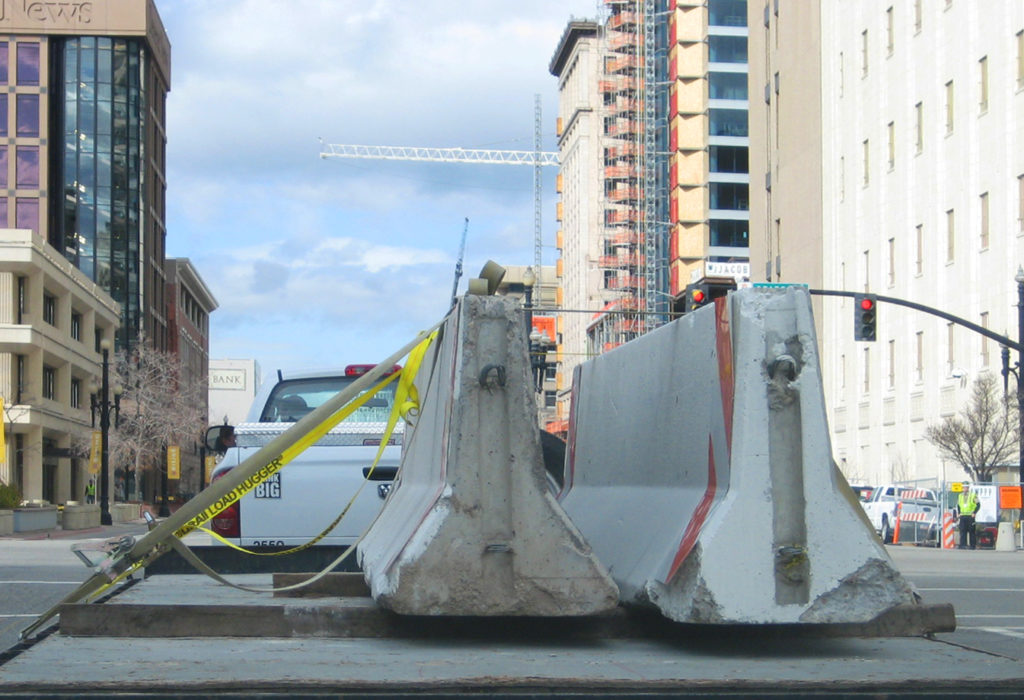 Tighter tolerances to help avoid excess wiggle room perhaps? I know it means a different design for each size of can (unless it can be parametric…).

Thanks for the reminder to “keep it simple”, @f.bigelow and @Jules. “Tolerances” is a better idea.

How about this general idea? add slots to the feed ramp that let you set your own can height with adjustable guides? The white lines are just a quick and dirty mock-up, but I would add some pressure-fit hooks to them so that they could be pulled out and adjusted as needed. Any objections? 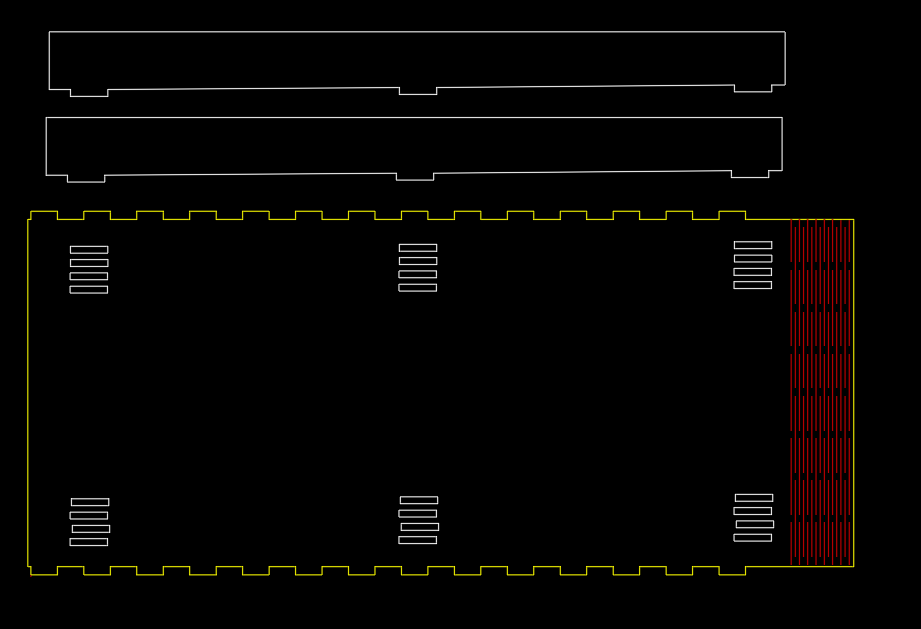 Think it is a great idea…hopefully they would stick well enough that cans hitting them as they rolled down wouldn’t knock them loose. Would you have to make those adjustable sides taller?

Another idea, would it be that hard to adjust the width? I know in my pantry space is a premium and an inch to 2 inches per storage box could add up to an additional (or maybe tuna sized cans) that could fit on the shelf.