I received my GF a week ago and have been happily lasing away the past couple of days. (I lost some time finding a way to vent it in an apartment with only sliding glass doors.)

My first project is a birthday present for a friend who loves music and tools/mechanical items. So I decided to engrave slate coasters with patent drawings of some common musical instruments. They came out nicely, once I came up with a good workflow for converting the images and dialed in the settings. Thanks to all who contributed to the thread about engraving slate, it provided a great starting point. Unfortunately one of the coasters has a flaw, and I don’t have time to get more before her birthday.

I also built another gift, the Desktop Tool Carousel from the catalog. The fit was a little tight, I had to lightly sand a couple of openings. But all in all it was easy to assemble, and works well. I won’t include a photo, since it looks exactly like the one in the catalog.

{Edit} I forgot to include a ruler in the photos, the coasters are about 4" squares. 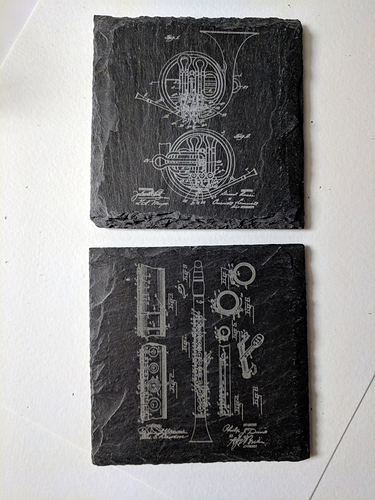 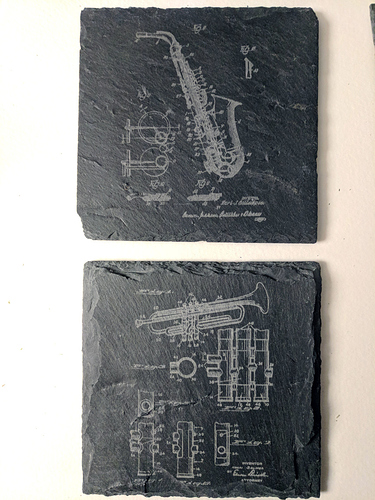 These look grea! Thx for sharing.

Loving all the slate projects! Thanks!

Those are wonderful! Any tips in the workflow of moving from patent image to a smooth engrave? I’ve been fighting with my skill gap!

Perfect present for a musical geek, and they came out great!

My workflow was pretty simple:

After processing the images, I created a file in Illustrator with a 20" x 12" artboard and used the Rectangle tool to create 4" squares. The processed images were then centered inside the 4" squares. In the Glowforge, the squares were used to cut a cardboard template to help with positioning, then the coasters were placed and engraved. I used the settings listed by @Jules in the Settings for Engraving on Slate thread as a starting point, and tweaked them slightly by lowering power by 1, which seemed to give a slightly cleaner engrave. I also used “Vary power” in the GRAYSCALE option instead of “Convert to dots”. If the image comes out too light, just run the engrave again without moving anything. I had to run the engrave on the coaster with the clarinet twice, and I was impressed with how accurate the second pass was, even after the head had been parked.

Love those coasters. I’m stiff stuck trying to find some slate locally. So far I’ve been out of luck