I decided that I wanted to make my wife a clock. Here is the final result: 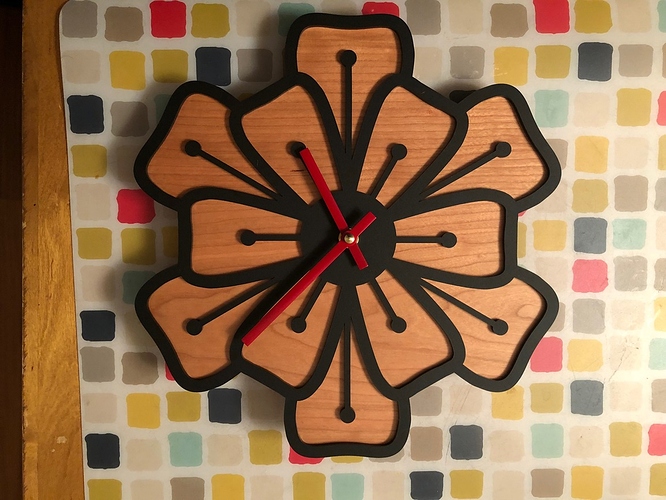 She really likes daisies, so I was trying to come up with an idea for a design along those lines. I ran across the following image, which is a design that a number of people seem to have copied. 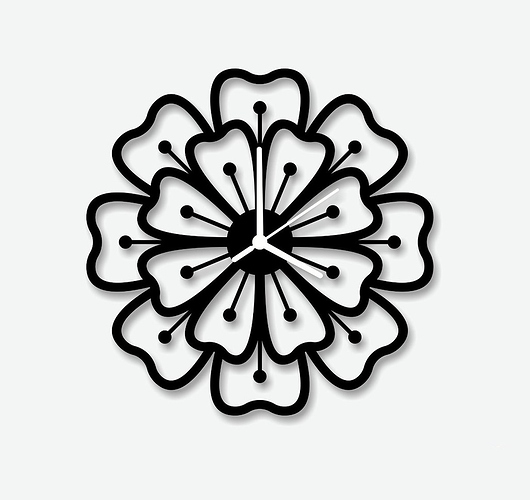 Although I really liked the concept, I didn’t like that it had 16 lobes (8 on the inner, and 8 on the outer flower). I wanted a design that had 12 lobes so that it would match the 12 hours on your typical clock. Also, the design was such that you couldn’t hide a clock mechanism unless the clock was giant - way too big for the laser cutter.

So I drew my own petal shape in Illustrator, and then used Illustrator to clone and rotate it into a 6-petal design, and then did a similar thing to make a second, outer flower shape. I actually played around with a couple of different petal shapes, but this is the one my wife liked the best.

I cut the flower shape out of black, matte acrylic, and created an outline of the same shape and used that to cut a background out of cherry plywood. The background is there mostly to conceal the clock mechanism, but I also think it adds to the visual appeal.

I purchased the clock mechanism from Klockit. They have many different options, but I went with one that synchronizes to a radio signal broadcast out of Ft. Collins, Colorado. This means that if you’re in the United States, the clock sets itself to the correct time automatically. The only downside to this mechanism is that it only supports dial thicknesses up to 3/16 of an inch.

Unfortunately the max 3/16" dial thickness became an issue because the combined thickness of the plywood and acrylic pieces is around 1/4" - 1/16" too thick. I solved this by using my laser to router (engrave) out a section on the back of the plywood so the rubber washer that comes with the clock can sit slightly recessed. I believe this washer is there primarily to provide sound insulation between the clock face and the clock mechanism, because after doing this, the clock ticking is definitely more audible, but I am still happy with the end result. But if you decide to go with a 1/4" clock face, you might want to just choose a different clock mechanism so you don’t have to deal with all that.

The final touch was to paint the hands red. Klockit had many options for hand shapes and sizes, but not many choices of color. So the hands I purchased with the clock were black. I just got some red acrylic paint from Michaels and spray painted them. I could have lasered a set of hands, but the weight of the hands can apparently have a very big impact on lifetime of the clock mechanism, so I thought it better to go with the lightweight metal ones sold with the mechanism.

Great job on it!

thanks for that writeup and the links. a clock or three is definitely in my future plans.

Another great project and post. I’ve considered many ideas for clocks, but not one this fun. My personal taste would be your design (I don’t get a 16 hour clock either, even in binary) in white and black or even yellow and black acrylic. Acrylic is not cheap, however, and this could use a fair amount of it, so you would really have to want it.

Now, to win just enough of a lottery so I can spend the amount of time with my laser it deserves.

Acrylic is not cheap, however, and this could use a fair amount of it, so you would really have to want it.

Materials cost for this was:

I also paid $7.75 for shipping from Klockit.

If you want to use a second sheet of acrylic instead of the plywood, it would actually be a little less expensive.

If anyone else is ordering from klockit.com , there is a 15% off coupon code that appears to still be valid. The code is: WEL15

Great job! Love that you used an atomic clock … may all clocks be atomic in my future. We have a huge one out on the deck spring through fall. Love it!

Great job! Love that you used an atomic clock … may all clocks be atomic in my future. We have a huge one out on the deck spring through fall. Love it!

Yes, they are great if you’re able to receive the time signal. In my case, I had already played around with a module that implements a receiver. Wrote my own decoder and experimented with several different antenna types, so I knew exactly where in my house I get the best reception, and what direction the antenna needs to be oriented. This made it easy to get the clock to sync up immediately.

What is the scale, or how tall are 11 of those colored tiles? I was thinking 10-12 inches tall.

Where I live, unfortunately, WWV signal reception almost never works. My only hope is WiFi clocks.

Did you try rotating the clock by 90 degrees? The antennas used in those clocks are basically magnetic loop antennas, so a lot of times that will improve the situation. I know that’s not much help if you had a particular wall you wanted to hang it on.

If you want to create a digital clock, you have lots of options. GPS chips are really cheap now, and there are some that even work well indoors. Or, of course, you can just use a WiFi-enabled chip (like an ESP8266) and get the time from some time server.

What is the scale, or how tall are 11 of those colored tiles? I was thinking 10-12 inches tall.

The clock is about 10.5 inches on the longest dimension. The minute hand is 3 7/16" long (measured from the center of the clock out to the end of the hand).

Long Island is just too far, it’s hopeless. As you note, there are other ways.