Is there a list of fonts that are on Inkscape that are recognized by the GF as a font? in other words, which fonts are on both Inkscape and GF so I don’t have to convert because the path> object to path trick didn’t work at all! I was using Papyrus in Inkscape but it isn’t in GF font file so it made it disappear. I tried path> object to path but nothing happened and the GF still wouldn’t recognize my text as an object.

I believe ALL text coming from inkscape or any other design tool needs to be converted.

One thing that could happen is if the object you are selecting is in a group with another object then path> convert to path will not work, that might be the issue you were having? If so right click and break group a few times till you can. But beyond that there are no fonts on inkscape that will work without that conversion on the dashboard as far as i know.

Left one wont convert as it is in a group like it says at the bottom of the screen. 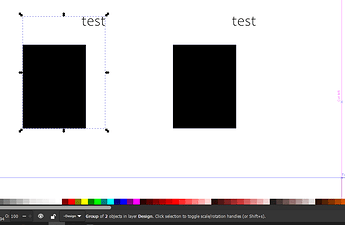 image1009×659 15.3 KB
The one one the right will work because it is just the text like the bottom of the screen says. 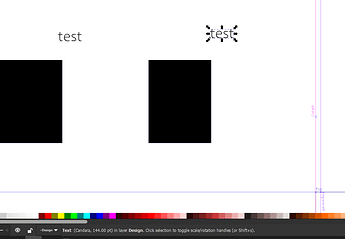 That is sad. You would think if they recommend Inkscape they might have chosen a few that convert. It must be some sort of copywriter issue then. But why would Path >
Object to Path not convert my text as it should have?

Has nothing to do with copyright. Has to do with them just not having a convert routine in the GFUI for fonts. Just not at the top of the priority list when design software does that just fine. As to why it didn’t convert; I would check what primal_healer said. I use illustrator so I am definitely not the person to ask for inkscape help.

I created text and Bezier curve and then Text> Text to Path
When I capture the text is shows me capturing just text. Let me make the curve path layer visible and see if it is capturing it without me knowing.

No, it didn’t capture the curves, just the text. I tried again but it is still text.

Papyrus is not a solid text. It is more open like a brush stroke, could that be the issue? This is my first text engraving on the GF so I’m having to watch tons of videos and ask questions.

You could also rasterize it.

should be the same for all texts, any chance you could post your file? or send it to me in a message

Text > Put on Path puts the text on the associated path, for example along a curve. You then need to select just the text, and use the Path > Object to Path command to convert the text to an object that the GF can handle. It’s easy to mix up the two commands, I did it today trying to use Object to Path to put text along a path.

I routinely etch fonts, but has been a while since needed to combine with a shape in Inkscape, so this may not help you:
I create the name/phrase in Word (which I’ve been using for years & have added many outside fonts to my fonts folder) and save as a .pdf to then load to the GF. But it usually can only be engraved in that format.

I just did Papyrus the other week–and found that if in Bold, the GF added a cut outline to it (even as a pdf upload!). It was on leather, and interesting look, but not what was wanted–fortunately was on a test scrap, so just the regular was chosen (though could have ignored the cut if bold was preferred).

It has been a while since I loaded a file with text created within Inkscape to the GFUI, and never had the problem with it being lost because it was a font in the GF Text library. Was usually error because of forgetting to convert the text to path & turning the outline off and the fill on (to get an engrave and not a cut!)

turning the outline off and the fill on

Any vector can be an engrave, score, or cut no matter what the outline or fill is. I usually leave the fill on so it shows up strongly on the dashboard.

Thanks for the great advice, everyone!

Thanks–indeed has been quite a while since I worked with text created in Inkscape!

My Thanks to primal_healer who helped me through this last night. This morning it decided to behave and do what I wanted. I was even able to add a heart and a heart shaped hole on the heart so that my waste could be used separate. When I learn how to upload an image on here I’ll show you. 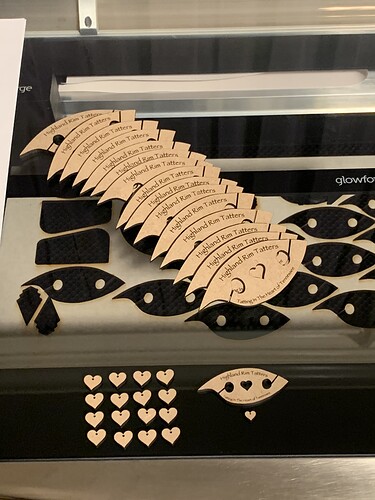