I despise wasted material, so I have all these small spaces left on various wood cuts. Someone here pointed out a cool site called TheNounProject that has tons of cool icons. I found a bunch of sci-fi ones and made these Scrabble-sized tiles. I just left the tape on the interior for contrast.
I made these since I will be helping a florist friend work a booth at a faire this weekend. I see the dead look in the kids’ eyes as they get dragged about, and I feel for them. So, as they stop by, I will give them one of these with a nod and wink and hope to make their trip a little more memorable! 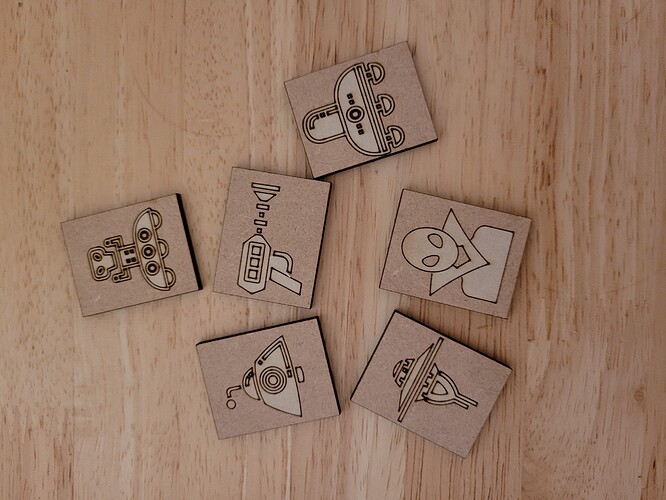 Cool images. Glowforge has licensed the images of the Noun Project and has included them in Premium. Very easy to use there. You may know that, but just connecting dots for everyone,

Ever with a view to children are dangerous animals, you might want to round those corners off a little bit!

This will make their trip much more fun! Great idea!

Just imagine if you could make it a treasure hunt fir the kids! Use images they have to match up and find as they go around! Great idea for scrap and fun!

So cool - I too hate to waste any scrap. We’re in the process of replacing our hardwood floors in the house and I’m not only ripping / reusing a LOT of the old hickory flooring (my wood rack has approx 1000 linear feet of lumber right now) but I’m also saving all of the cut offs from the new wood flooring. I KNOW there’s something I can do with it.

By my laser I have stacks and stacks of bones of wood that’s been cut but not fully “used”. This is a GREAT idea for that! Thanks for the ideas!

That would be fun!

The idea and thought behind these is great and I’m sure kids would love these. A couple of things that might be of concern…as @marmak3261 said, the Glowforge premium feature subscription will allow you to use thousands of the Noun Project icons, whereas you cannot actually use them for free from the actual Noun Project site. Another forum member and I had both set up accounts to use images from the Noun Project, thinking they were free. Buried very deep down in their site are the usage terms…and they are not free at all. We both cancelled our membership for that reason. My second concern would be that since these tiles are quite small, they could be a choking hazard for very young children. As I said…great idea…perhaps with some redesign.

The images you are talking about with noun project are “free” to use though. The original post says nothing about selling these images. You are able to create things with these images for personal use if I am not mistaken? So making little “gifts” that are given away should be just fine. Noun project has been a bear to figure out as far as the legal terms go I’ll give you that.