For you Civil War buffs

I don’t typically do photo engraves (maybe they intimidate me too much) so up until now I have only done one (I did it for @nancielaing as a test, and I think she will agree that I did a pretty poor job). So this one was a real stretch for me. But I figured I had the perfect subject. This image is from a letter handed down the family, written by my great-great-grandfather to my great-great-grandmother early in the war. He was in 2nd Wisconsin Cavalry and they were in St. Louis to get their horses. (Later in the war he was imprisoned in Andersonville, but that’s another story).

Anyhow, the stationery that he used for the letter had this engraving or etching of the St. Louis fairgrounds on it, so I thought I’d give it a shot. I had to do significant cleanup on the scan to get the fold lines, etc, out. Here is the “before” image: 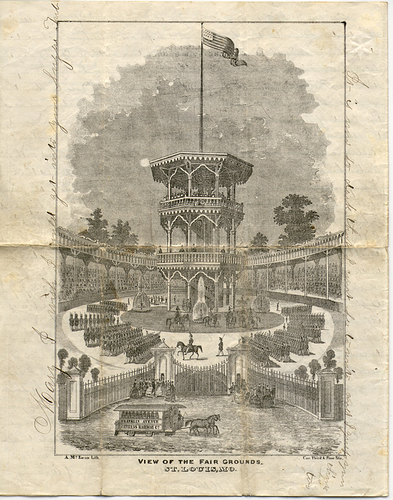 I did some shenanigans in Photoshop as well as the GFUI to get this done, since in one go it was too much for the GFUI. I’ll do a separate post in Beyond the Manual if you want to know what I did. Anyway, here it is in PG maple plywood: 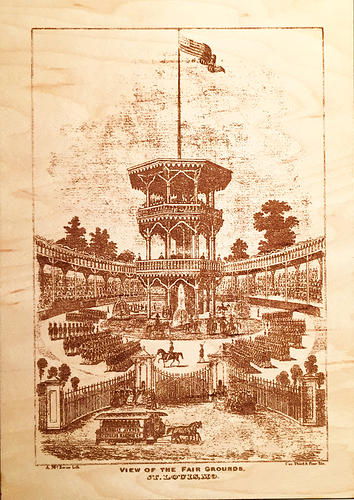 Final dimension of the piece: 6" x 8.5. It’s okay as a first attempt but I think there is a lot of room for improvement. I did it now as my sister requested a copy of the scan so she could have it printed, and I thought she might like it engraved in wood instead.

Nice clean up job!
And nope I don’t agree.
We may have learned better ways to print photos, and the online interface has also improved, but it was still a nice image and it beat the one I tried to make on the Universal laser I used from the local college.

Wow, that was a really nice cleanup job! The results are excellent!

What an incredible treasure - the original and the homage.
I bet any cousins (2nd 3rd etc) who claim the same soldier would love that, too.

I love family history.
I love when family history bumps in to major world events. Momentos from those characters in those events… well that’s magic.

Then, when the item is pretty.
You have something incredible there. It’s pretty, and if you keep tweaking I’ll want to see that. Thank you for sharing… it’s just incredible.

This is so great! Like @cmreeder, I love genealogy and family history, so this is a real winner.

That turned out great!

You’re really selling yourself short! The amount of detail you can see is fantastic, especially in the soldiers and any other place that is really tight. In my opinion, it’s more clear than the original, so this is definitely a win. The only real difference I can see is the sky, but that may have been wanted, as it may have made the top half of the picture a little muddy. Super cool!