I sure we have few in this group (aeronautical engineers) that could make a better design. Or at least one that can fly. I used chipboard, so that might also be a factor. Waiting to order some proofgrade balsa wood.

WARNING: DOES NOT FLY

How fun! You are on the right track… Three suggestions for you:

Here’s a set of plans that the AMA provides for Science Olympiads. I will eventually get around to making a GF-friendly version. Eventually.

WARNING: DOES NOT FLY

What if you put a cape on it?

Does it fall with style? 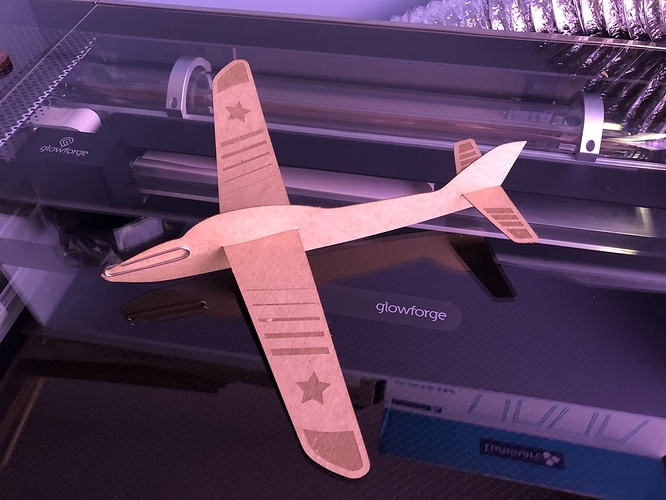 Too many years ago to admit, a friend and I started with Whitewings designs and started designing our own similar card stock planes. We used plain or colored manila folders as material. I see now there are numerous similar planes now available online such as this one: http://www.zovirl.com/2008/11/20/laminated-paper-airplane-g-4/ .

Be warned though, when tuned right, they will definitely fly. We lost more than one to thermals

Definitely a project for me to try on my new GF!

Wow white wings. That takes me back.

Well this has me thinking.

I have a stack of old whitewings that I never built. I’m gonna order some of the appropriate paper stock and see if I can laser cut them. Should be possible to scan the sheets and convert them to SVG?

Do you think the forge’s scan feature is accurate enough to manage it?

Do you think the forge’s scan feature is accurate enough to manage it?

I don’t think so, but that’s my experience. That feature just hasn’t been as awesome for me… picks up artifacts and misses real stuff, distorts… I find that a phone photo and a little editing in ai is a better workflow.

I bought a set of white wings that was missing the balsa and another that had the balsa so I tried to scan one piece to copy it. The scanner didn’t cope well with the wood so I traced the piece onto a bit of white printer paper, had the GF trace it, then cut it on piece of balsa. The end result is almost exactly the same, just a pen line width larger because I traced around the wood.

As far as paper gliders, I decided to just use a silhouette cameo to cut the paper since that’s what it’s designed for and the software is pretty well geared to it. I’m gonna try to laser cut one of them on the forge though just haven’t gotten around to it.

The end result is almost exactly the same, just a pen line width larger because I traced around the wood.

This is another place where numbers would be great, so you could resize by a certain amount instead of whatever your mouse accuracy is…