I’m making some path/accent lights to light up a dark area for an event. The main body is plywood, but the front (where the light comes out) is acrylic. I’ve experimented with insets (thank you YawString), but decided I liked the frosted look that engraving acrylic gave me.

One tip I figured out. Don’t engrave acrylic at 75 lpi! The engraving itself is fine, but weeding the tape is a nightmare because it leaves little strips of tape/glue between what the laser burns away. 125 lpi or higher (the attached photo was engraved at 500 zooms, 80 pews and 225 lpi. 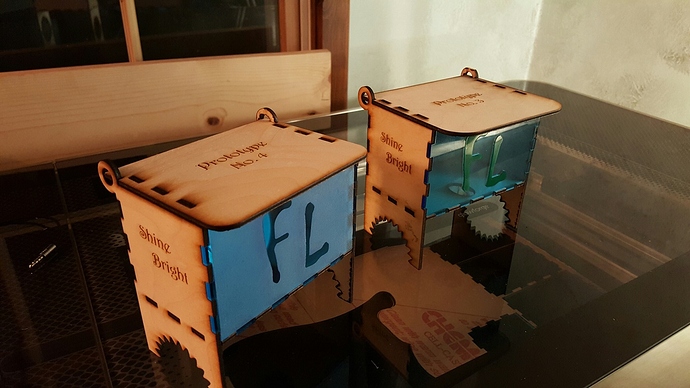 And what will the light source be?

Looks like a cool project! You could just remove the masking on that side before engraving the acrylic, it should come out just the way you want.

(Gorilla tape for removing those leftover masking bits at 75 LPI.)

I liked the frosted look that engraving acrylic gave me.

Either paint the whole panel because the letters overlay and won’t be affected by the back being paint frosted or run a score around the letters, peel off everything but the letters and then paint frost it. If you frost paint the back and then score the letters on the front but peel off the letter masking you could shoot the front with black or whatever color you want without getting bleed and have a frosted panel with colored letters.

I hadn’t thought of scoring the masking, great idea, thanks!

Though I am probably going to use some more elaborate frosting decorations that might be more, ah, “laser-ish”, gradations on the frosting and details like celtic knots.

I do plan to add some metallic coating to anther project, and I’ll remember the scoring idea.

Stick them on the back wall, the top has a hinge to open up and turn it on.

I was using regular old Duct Tape, maybe I need to upgrade my weeding kit