Thank you for reading, I am new here in the community. For reasons to do with timing of grant money, my school purchased a Glowforge basic without ordering the attachable fume extractor, which at the time was not available anyhow. Shortly after they released the compact extractor but would not allow me to purchase it individually when more money came in. Point being, I ended up purchasing a Fumex FA1-E.

The extractor is fine but I am getting a dangerous amount of fuming coming from the cutter. I’ve asked for help from Glowforge but they quote the manual at me. I’ve set up the exhaust hose to have a single 90 degree bend and set the glowforge app to “compact filter attached” but the fumes still accumulate to the point that people in nearby offices have had to leave the area. Needless to say I am walking away with headaches so I’ve put all cutting on hold.

I suspect that the issue is coming from the fact that the glowforge has a 4" out which is being adapted down to a 3" in for the fumex. Is this change in diameter enough to force fumes back into the machine and out of the gaps in the lid and door?

Taking a quick look at the Fumex, it seems to have a lower flow rate than the GF fan:

It may not be able to keep up.

I thought that may be an issue but according to glowforge I just need to be able to move 150 cfm.

You may also want to double check that you’ve got everything sealed. Are you seeing any smoke or anything coming out of the front of the machine; which would indicate some back pressure?

I’ve checked all the connections and taped up any place that I detected any air escaping. It definitely seems like the air is coming back into the machine but I don’t think it is due to any leaks. 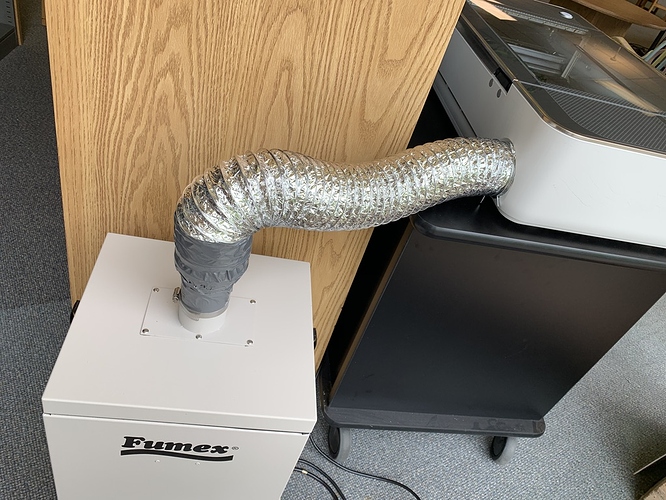 I wonder if a hose fan between the machine and the extractor would help?

That connection to the GF is prone to leaks - a wormgear clamp is better. Or even better than that, get the Rockler connector - it’s rubber and seals better.

I’d also not tell the GF that the filter is attached so it pushes more to the Fumex. It doesn’t seem that slowing the on board fan is helping you.

I’ll give that a try,

That wire clamp is just lousy. Almost everyone ends up replacing them. It’s really hard to get a good deal there because the flange is short and the hose has a spiral wire running in it that means you may not get a 360 degree flat seal against the flange. The wormgear clamps work better because they’re more likely to span a couple of the wire twists.

The Rockler connector seals flat all around the flange and then the hose can be sealed to the other end with a clamp and HVAC foil tape to make an airtight connection. I’d use the tape on your Fumex reducer connection too.

Set the Glowforge for a long engrave with a power of one. It won’t be creating any smoke at that power. Then you can use a smoking incense stick to find if air is coming out of the door cracks. It should be sucking smoke in all those cracks rather than blowing them out. You can also use the incense stick to check your seals around the exhaust port.

If you find that smoke is coming out of the door cracks then disconnect the exhaust to see if that changes. If so there is a back pressure due to the filter being unable to keep up.

according to glowforge I just need to be able to move 150 cfm.

i’m curious where you found this number. I seem to recall it being 200 cfm…

Your Glowforge is designed to operate with the included exhaust hose connected to the outside with a maximum of two 90 degree bends. If you configure your exhaust differently, the Glowforge unit may not be able to expel enough air, and it could cause smoke and fumes to enter the room. Because ventilation is complex, we can’t advise on exhaust configurations other than what’s described in the Glowforge Manual other than to say that airflow is roughly 150 cfm.

interesting… it looks like the info was in an email, rather than posted somewhere online?

That’s accurate. I was inquiring about ventilation options and that was the info I got.

Airflow and fan CFM are different beasties. Plus, it could also be a difference between with the fan set to “compact filter installed” and the default standard performance since it’s supposed to be running slower with the CF.

Did you turn the switch on the “Compact Filter attached” ?

Sorry if that sounds too aggressive.

Not trying to be mean or anything! It’s
Just that sometimes we forget to do the obvious.

I hope you get it fixed!

Did you turn the switch on the “Compact Filter attached” ?

That’s why I was suggesting more aggressive sealing approaches and turning off the CF setting so the main fan resumes full power operation.

I have a 6’ run & 2 90degree bends and a Vivo fan inline and have not told my GF to slow the fan. I’d think with a standard commercial fume extractor you’re better off pushing more air (up to the F E’s max input rating) than less.

sure, but they relate to each other, as well as to the length and diameter of the duct.

Yep. But I expect the fan CFM is still officially 200. I was wondering if the “156 CFM airflow” from Support is actually what the fan is spinning when in “Compact Filter attached” mode.

I wonder if CFM could be increased into the filter by adding a fan in the duct but I suspect that the physics of it is not that simple.