I had no window to run the exhaust. But the basment has 8 inch exhaust open pipe that goes up 8 foot then out, so I run the glowforge exhaust up that pip to the top. I get a lot fo smell and fumes. Is this because the glowforge exhaust has to go horizontally and out through a window, or it is normal to get some fumes with glowforge. Has anyone used additional exhaust pump inline on the hose.

The little fan in the machine probably can’t push it that far. Might want to look into getting an outside fan. Most people use them anyway. Or there is the vent from GF. I’m going to be using the 6" ac infinity on my set up.

That’s longer than the run should be without an additional fan - can you add a fan to the end of the exhaust pipe? 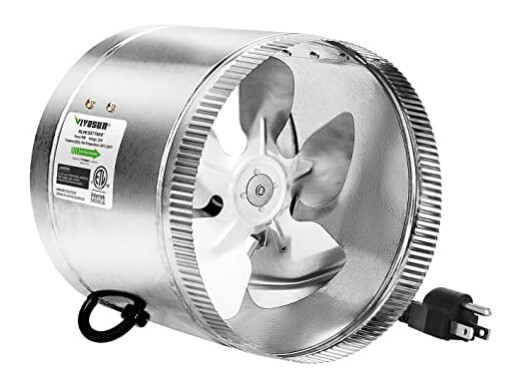 A lot of people, including me, use this inline fan. It’s easy to install, super quiet and kicks butt. Most of the time I shut off the gf fan and just use this. It’s sooooo much quieter that way.
AC Infinity CLOUDLINE S6, Quiet 6” Inline Duct Fan with Speed Controller - Ventilation Exhaust Fan for Heating Cooling Booster, Grow Tents, Hydroponics https://www.amazon.com/dp/B07FPFVZTZ/ref=cm_sw_r_cp_api_glt_fabc_5TBPJCXD1GJTKXRYSPRE?_encoding=UTF8&psc=1

Depending on the top of the pipe, how far above the house it is, and the wind speed and direction it could be pumping more volume down the pipe than you can pump up it. and of course, if you are running a 4" hose up an 8" pipe that goes triple at least!

Surprisingly, the air going out the Glowforge can be smokey but is not very hot, so the weight of the smokey air may even be heavier than regular air, or if it is very cold outside, then the cold air would be falling down that pipe, cooling the lasered air even more. essentially you would need an 8" hose to fit the 8" pipe and an 8" blower fan similar to the Cloudline and a way to step down to the 4" when it reaches the Glowforge,

In addition, I would get one of those turbine vents that spin in the wind, so no matter how the wind comes it pulls air out rather than pumping it in,