Been playing around with some stones and agate… think they came out pretty good!! Now to learn how to drill holes in those suckers!!

I once made a clock face with a geode slice. The guy I bought if from told me how to cut the hole, but I don’t remember exactly. This is what I remember: Attach the stone firmly to drill press, form a ring of plumbers putty around where the hole will go to make a pool. fill pool with (here’s the part I don’t remember) some sort of gritty dust and water to create a slurry, put a metal pipe into the drill press chuck, the size of the hole. Turn on drill press at lowest speed, apply constant pressure through the slurry and be patient.

Lapidary diamond bits on your Dremel would probably do the trick. You can get sets very inexpensively through bang good.

Yah just picked up a few…gonna be a learning experience filled with some chaos I presume!

What power settings did you use? I have several slices I have planned for a lamp

You need to bury one of those in an archaeological dig !

Second the diamond bit, harbor freight has a set for cheap.
They are inexpensive because the diamond is nickel plated on. They work fine as long as you don’t overheat them, which means running them wet. If you do overheat them, the grit will wipe right off the tool. Wet is also good because you don’t want to breathe the dust.
You can get by just using a squirt bottle. No need to continuously spray it, you just need a small pool of water (bigger than a pencil diameter, smaller than a dime) on the spot. Surface tension will keep the water in place. Slower RPM also helps prevent overheating.

Love this. Agate has been one of my favorite mediums to use.

If it were me, I would probably cut the holes first then engrave around them next time. Easier to move the item around in the GF than to get the hole alignment just right.

Another great trick with those diamond coated bits is to use hot glue to make a ring around the spot you want to drill through. Then fill the ring with water. As @PrintToLaser says go slow and apply VERY gentle pressure, otherwise you will crack the stone. Best is if you have a drill press.

Another great trick with those diamond coated bits is to use hot glue to make a ring around the spot you want to drill through. Then fill the ring with water.

That is a good trick.
I like to have the freedom to move the axis of rotation around, it seems to cut faster. With the tool plumb, the tip of the tool (I like the round like a ball tip for that application) is rotating perpendicular to the desired cutting direction. The cutting action is limited to tight spinning circles on the end. If you tip the tool you are dragging the side of it through the material, a more direct cut. (does that make sense?)
Until you have a divot for the tool to ride in, you have to be careful not to let it climb out of the divot and crawl across the surface.

We all have our preferred methods, and I have the scars to prove mine were earned.

nice…thanks for that tip.

i actually engraved a notch at the top( not in the pic ) to place the bit in …figured it would rest in there to start. It should be fun!!

Fair point, I did not realize what kind of bit you meant.
The ones I use are tubes like this: 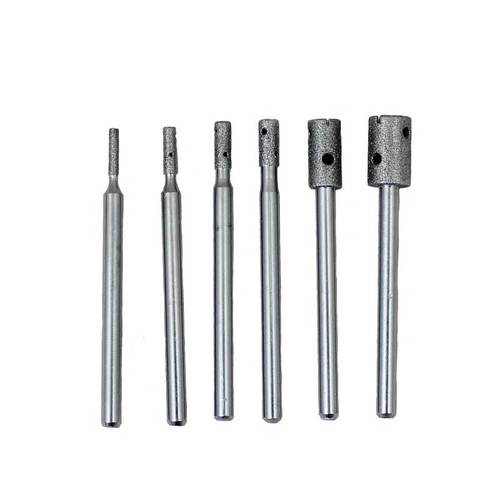 Discover Drills - Diamond Core,Set of 6 pcs. This tool is fantastic for jewelers who want to drill holes in glass, ceramic, and tile.

They have always worked great for me on stone as well.

All you need is for the grit to be harder than what you are drilling. I always lifted the bit every few seconds as particularly when part way down the head of the bit starts to dry out as the “mud” of cut rock prevents water from getting to the cutting head.

An expended .22 shell casing carefully soldered to a nail and 100 grit silicon carbide powder using glue or clay to hold the slurry is how I have seen it done in the past usually with a small drill press.

In any case a hollow cylinder cuts better than a solid one as the grit at the center barely moves slowing everything else.

Those look awsome, I’m going to have to look into doing something like this.

Oh, I have never had the benefit of a core drill, I expect they would be much faster than grinding away the entire area.
Those would be very handy, thanks for the link!

When we had the kitchen and bathroom counters done in granite, the guy used a 3/4" core drill to do the sink faucet holes. The diamond core had no pilot, and he would start with the bit at a slight angle to start the edge, and slowly straighten to vertical. Freehand!
I was amazed at his touch and control of the tool. Like anything, if you do it as a matter of daily routine you get really good at it. The core saw he used is one where the diamond is brazed on instead of plated, so it could take the heat of being run dry. It was really fast too, completing the core in 3cm. Granite in like 15 seconds!

Yah saw those…im going to start with the ball bit for now and work my way up to those. Ive had a bunch of these now since the come in dremel sets and never used them.