I’ll let ya’ll read the link for the full skinny but wanted to give the heads up on two updates that based on comments from people here, would be of most interest.

Also, the new features that tie-in F360 with Eagle for electronics is INSANE!! But you gotta check the link for that. I know we have some electronics makers here that might love this.

And I’m still trying to understand it

. But at least I printed my first 3d model

Me too…probably more than I need right now, but the unrolling feature sounds great - I’ve used one in Rhino a few times.

The sheet metal workspace looks very cool. I wonder if you could design, say, a box in acrylic and have it cut the outline and do a light vector engrave along the fold lines to make it easier to line up in the bender? Or use it to make custom cardboard boxes with the same cut/score method?

Looks like when you convert the sheetmetal form into a flat pattern, Fusion marks the center of the bend, and from the “Flat Pattern” interface, you can generate a 2D Sketch and Project/Include those lines. 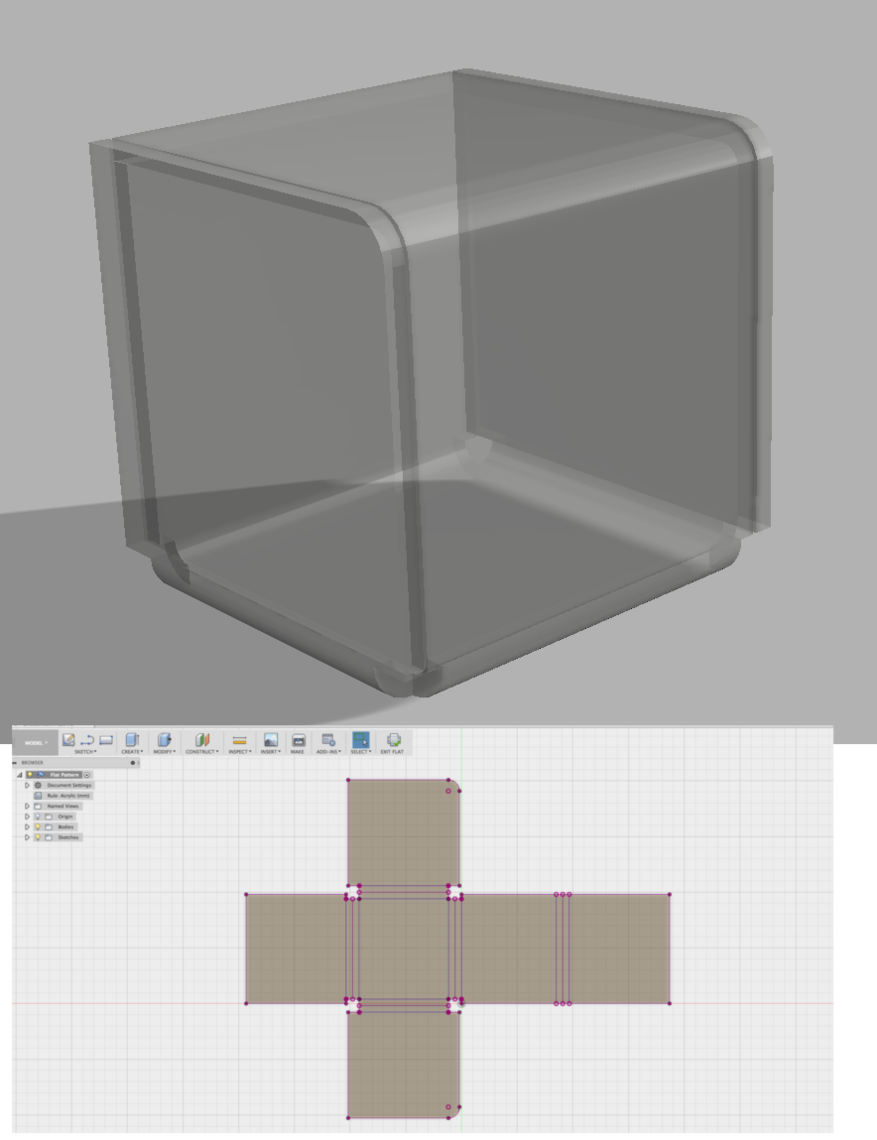 Yup, major goodness in this one. I’m not working sheet aluminum right now but will at some point.
One of you intrepid folks need to come up with a profile for leather!

The web interface does not work with mobile browsers yet

Something underplayed is the addition of curved slots. Huge time saver right there!

This can probably be adapted for EVA foam for any cosplayers out there.

Have you tried this method? I was able to get the flat lay into a new sketch by projecting (thanks! That was new to me! (yeah, I don’t know Fusion great) But, while I’m in flat mode, I can’t seem to export a DXF from that “flat pattern” view; the sketches created there are separate from my other modes.

Edit - F360 just updated twice for me and now I have Save to DXF from the flat lay sketch mode!

I’ve gone through the process to save the flat sketch but I have not yet gone all the way to the laser cut end product, but figure it’s not any different than the usual sketch -> DXF -> SVG workflow.

I saw the update icon, so I had updated a little earlier. After the program restarted, I just went about doing what I was trying to do. Apparently, the update icon was still lit up (not sure if update didn’t take, or if didn’t push me to latest release?). After the update, the DXF export appeared like it should in that ‘module’.

I should have inspected the file a little closer before cutting.

Tons of duplicate lines to clean-up.

That is one problem with Fusion360, when you “project” a 3D body instead of manually selecting each edge individually, it will project both the visible edge and the hidden one underneath, along with overlapping edges between multiple bodies.