Getting An Outline - Inkscape

I am new here and this is my first post. I am sorry if it is in the wrong area, if so please let me know which to put it in.

Anyway, I am trying to make these tokens for a card game I play. I would like the token to have bold numbers and bold border etched in them. I am trying to figure out how to cut them out and I am having a hell of a time. I saw online that you could go into view/display mode/outline but when I do that I get the black and white image attached. I would just like to the tokens to look like the blue and white photo but I can’t figure out how to cut them. Thank you in advance and I appreciate the comments.
Thank you, 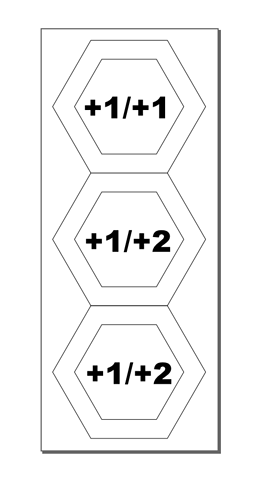 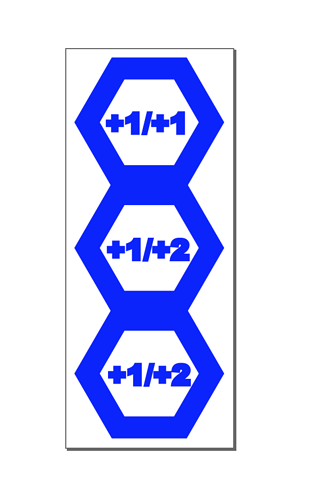 If you duplicate the outside shape and just assign it a stroke color, it should cut.

If when you duplicate it, it duplicates the inside shape too, just go into node editing mode, click one of the inside nodes you don’t need, select all, hit delete. You should be left with just the outside. Remove any fill it might add and just assign a stroke color.

If you need more help, let me know. 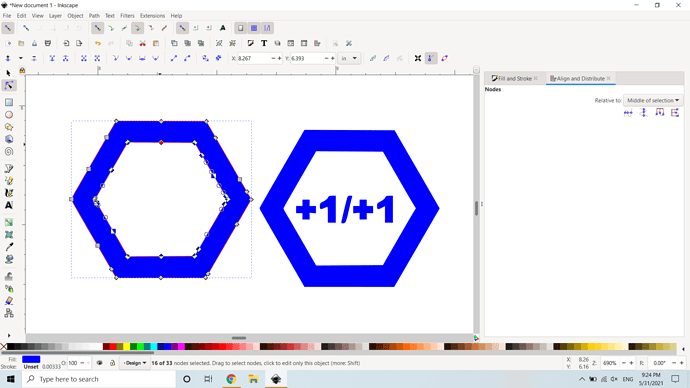 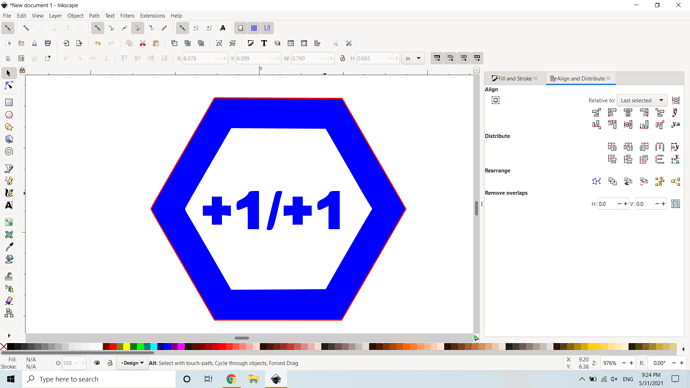 Thank you so much for the reply and the help. I am close. I modified the original and now for some reason when I save the file on Inkscape and upload into GlowforgeApp the border is not scoring. 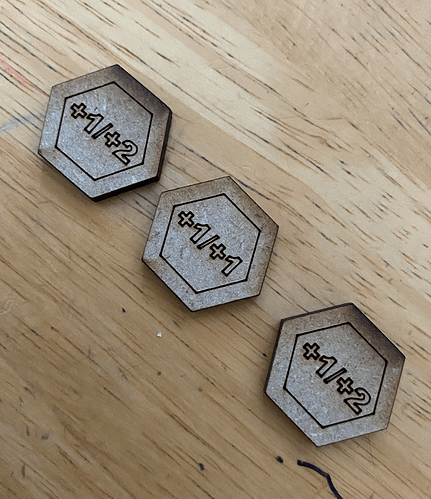 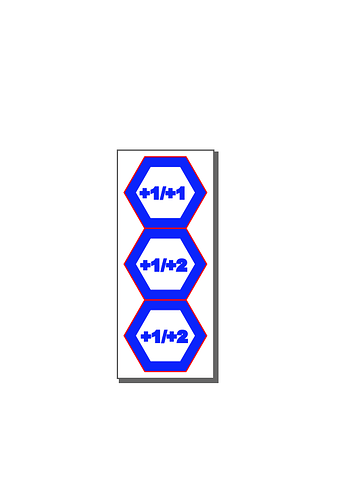 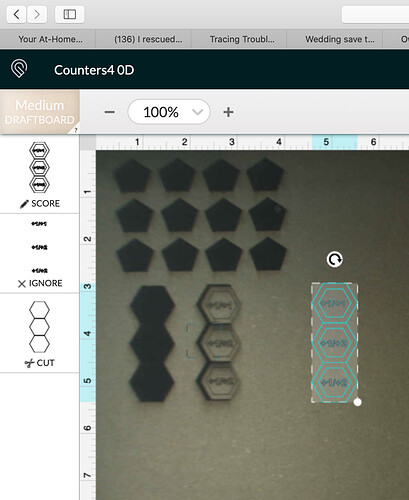 Thank you again for your help. Any thoughts on getting the large blue border to score?

So I think you’re getting some language mixed up here. Score versus engrave. Score is a light line it draws around a path, engrave is when it fills in the space.

I think you want the outer border hexagon engraved, yes?

If you upload the file I can show you directly, but I think this is a case of color coding and svg structure. Kind of hard to give you specific instructions without seeing the file though.

Ahhh yes I definitely didn’t know the difference their between score and engrave. I have uploaded the file. I am trying to engrave the bold outer border of the hexagon.

So this file is pretty good as is, but I do have a few pointers.

Your numbers have a stroke assigned to them. This isn’t a problem but it does give you an incorrect idea about how the engrave will look, as stroke width isn’t in the engrave. As such, your letters look bolder than they will turn out. Check it out, original with stroke on the left, without stroke on the right: 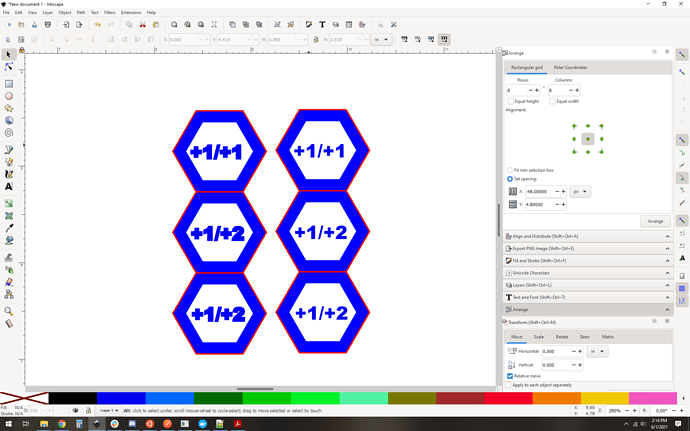 It’ll turn out more like the right than the left, by design.

Next, orientation. In general it’s more efficient to arrange your engraves to be mostly horizontal. It’s not a huge difference in most cases, and in others it will actually be faster vertically, but as a rule of thumb, lay it down wide instead of tall. 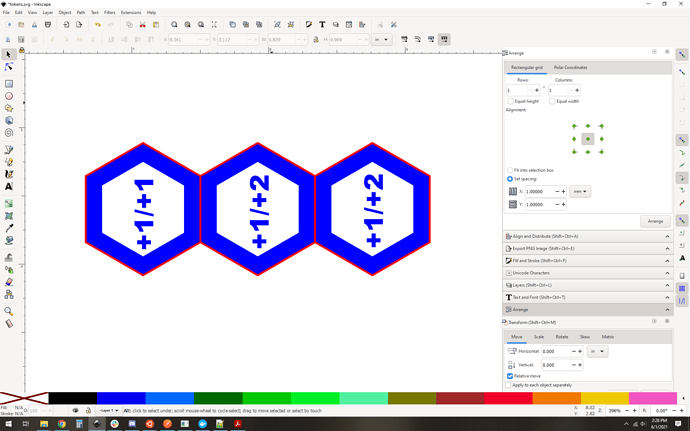 After that, now you worry about double cutting. In places where your hexagons match up, the red lines are on top of each other and will cut those areas twice. For this design that won’t present a significant fire risk or anything, but it will probably make that edge darker and have slightly wider kerf. it’s a minor thing, but best practice is either to separate the pieces by about a mm of space (A) or remove the offending segments (B) and then snap them back together (C) 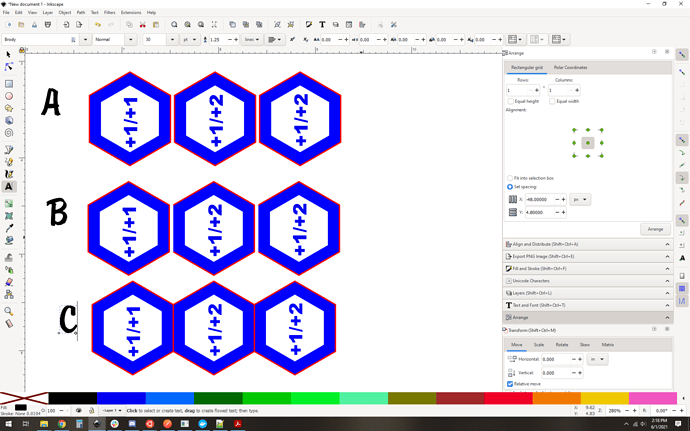 I prefer (A) in general. It’s less efficient on some levels, but I like to know what I’m doing for sure at a glance and also to ensure that the pieces are all the same.

And lastly, path management. I like to use union to make my paths all combine into one path when they’re a “unit”. So I select the blue hexagon and the +1/+1 shapes in the left one, and do Path->union. now they’re one path. I then select the red hex surround and group them. Now it’s a token group. Repeat for the other two, and now you have three groups, each consisting of two paths, a solid blue filled path, and the red outline. Ready to cut.

Here’s the SVG on a full-bed sized page size: