So, my GF Plus should be here in just a couple more weeks! While waiting I decided to get its home ready. I modified a 36” kitchen cabinet from Home Depot. I plan on putting the online fan inside the cabinet to further reduce the noise level. My only concern is the bends in the tubing to get to the fan and then back out to the window. I read someplace that it should be as straight out as possible. Do you think the 90 degree bends to get to the fan and then back up and out will be a problem? 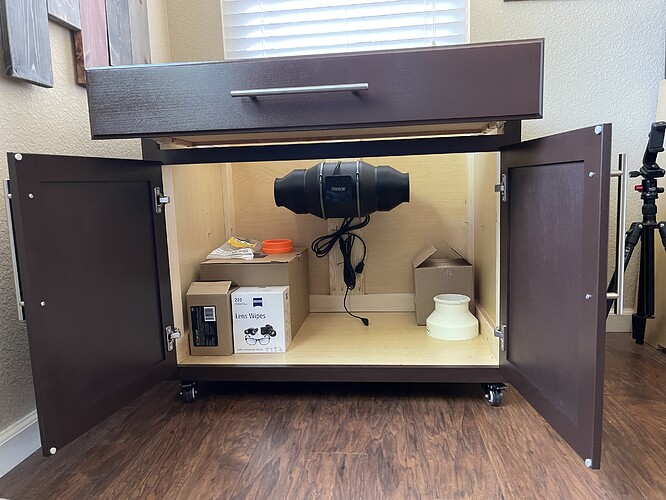 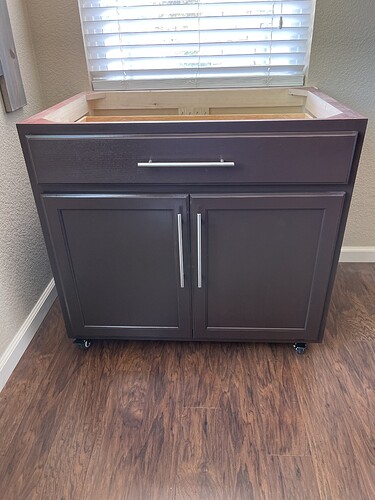 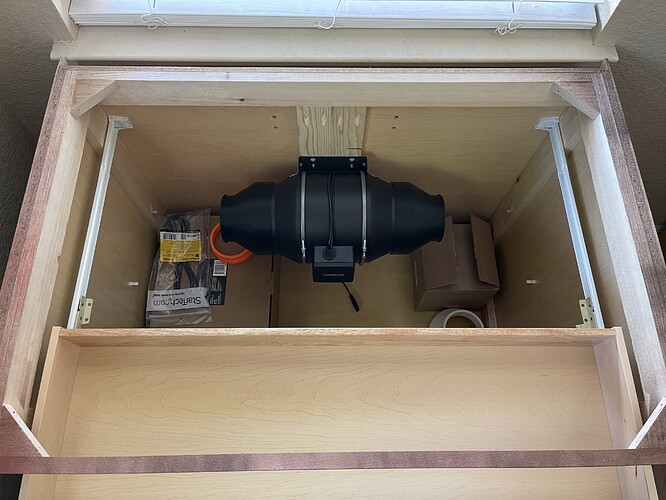 I use that exact fan and have way more bends than I should have. I’ll have to post a picture soon. I run my fan at about 2 notches from max and things have been great. I use about 10’ of vent hose that goes up a total of 4’ before venting outside. That set up should be fine I would guess. Only one way to find out!

Thank you! Yeah, it doesn’t have to go too far, just around several bends. Thanks for your response. It puts my mind to ease as I was thinking I might have to come up with anew plan!

Every 90° bend is the equivalent of approximately 4 feet of straight exhaust. Your setup looks like it will take 3 bends from GF to the fan and at least 3 to the window, so that’s roughly the same as a 24 foot run – far longer than the recommended run with the internal fan, so hopefully your inline fan has enough oomph to overcome this.

If the window in the picture is where you intend to vent I think you will be fine. The noise from the booster isn’t bad at all compared to the onboard exhaust. Put a top on it and you’ll have a Nice setup!

Thanks for the reply. Yes, the window behind the cabinet is where I will vent. I wish the onboard exhaust fan was quieter because that would be an straight out the window and done deal!

The fan vibrates the hose and the whole hose acts as a soundboard, so you may not be saving as much noise as you think. I guess you’ll find out when you test it.

The best place for a fan is at the end of the line. By pulling instead of pushing, you cut down on the amount of smoke and fumes that will inevitably leak out of anything under pressure.

That’s a good point! I guess it might be a little trial and error in the beginning. Just don’t want to cut anything permanent until I know it’s going to work. I know the online fan is nowhere near as loud as the built in fan. I just want a clean look without a bunch of hoses going everywhere. I guess my OCD is worse than I thought! Lol

The fan that the poster has shown is 30db at full. SOOOOO much quieter than the original fan. The manufacturer sent me the cfm for each step of the adjustable fan and the range goes from 44 up to 351. Here my setup with way too many bends and a blast gate because it’s in a Minessota basement going from hit and humid to cold and dry. 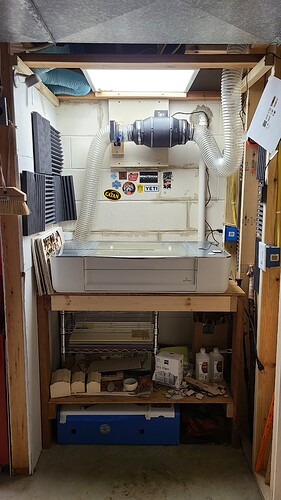 The difference between your setup and mine is the angle of the bends. Your bends are much less sharp than mine will be. However, I don’t have as far to go either. So, I think I’ll be okay. I might change the fan to to vertical to eliminate a couple of 90 degree bends. But, I don’t know if that will affect the fan in any way. I assume it can be mounted vertically?

I agree with his fan placement suggestion. my fan feeds directly into the vent going outside. that way the entire run(not that long 5 feet or so, is under negative pressure.