For all you game nerds out there with a 3D printer, this cube was printed at 200% size on wood PLA. The tiles were cut on the

using Rowmark Color Shop 1/8" Plywood. The cube was downloaded from Thingiverse. It works, but not very smooth. It will sit on my desk work as a conversation piece. 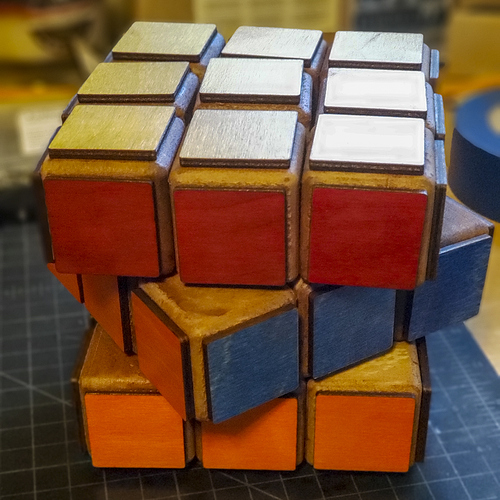 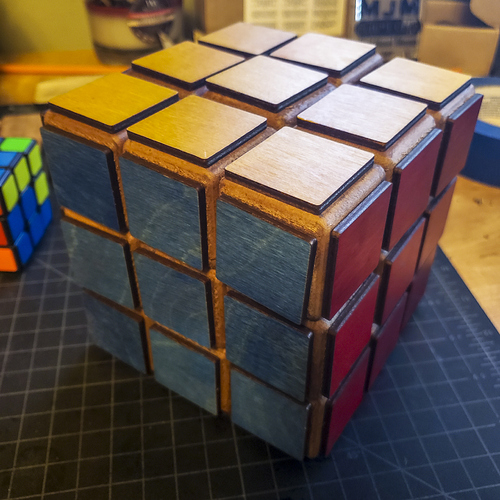 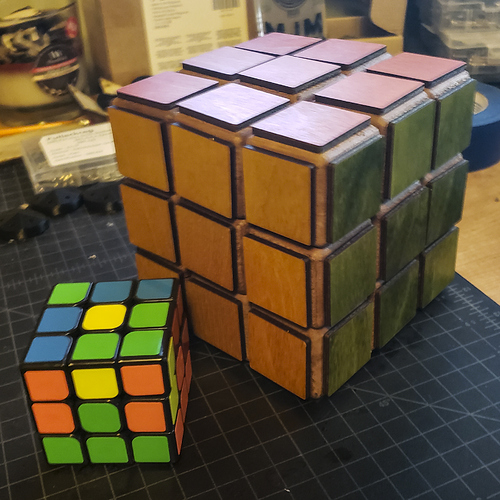 Too cool. I had actually been researching how those were made and if one was possible with the Glowforge.

I don’t think it would be impossible to do it completely with the glowforge, but there’s probably going to need to be some sanding and tweaking of the shapes. I’d love to see someone figure it out.

I suspect the way to go would be to match the 4 and 5 cubes where you have a central ball that pushes pieces out that are disconnected and they are all tongue and grooved around the central core. I also think given the variance in density with wood, a lot of sanding and some sort of sealant between the cubies. as @pubultrastar said.

I actually own way too many cubes, including an official wood rubik. If I choose to use it I have to work a lot on it as humidity and general crud makes it very hard to turn.

ok my mind just though about the tongues and grooves, and with odd pieces you don’t have a good way to use interlocking to keep the pieces in. either the edge or center will be loose. So you’ll need some sort of a mechanism with axels to turn the central face cubies.

This is cool! (That wood PLA tends to sand just like real wood - you could probably smooth it out a little before finishing it with the tiles if you wanted a smoother motion.)

I think that since I messed with the size of the original 3D object, it made it not work exactly right. I mean it does work, but there just isn’t the smooth motion you get from a regular cube. I thought about sanding, but I doubt this will be anything but a show piece. Fun project though!