Another project for the Spark Museum. This one is a 3x scale telegraph sounder, to be used in front of large groups (typically school field trips). It is mostly wood cut on the glowforge and treated to look like metal in front of an audience. The pieces that look a lot like brass, are brass. The “electromagnet” was made from a 4" drain pipe with a smaller magnet hidden inside. Shown with an actual sounder for scale. The model is about 12" tall. 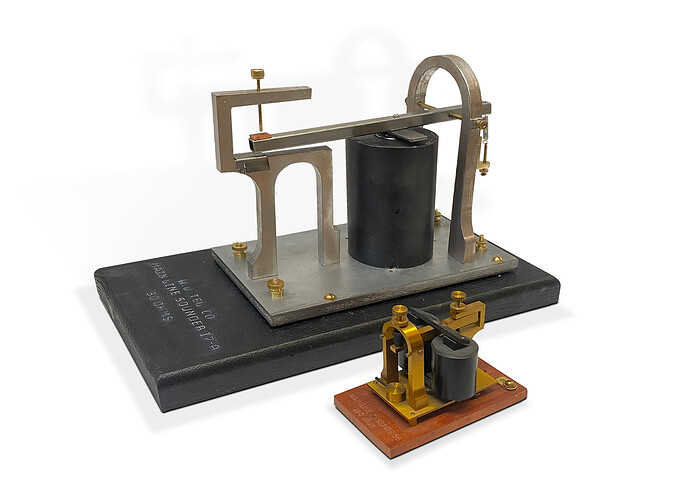 That is a fascinating way to make a small item easier to see for large groups! I love that it still works, just with the smaller components inside the mock large components.
My dad is a Ham radio enthusiast, and is working on learning Morse code this year. I should tell him he needs to make his own telegraph sounder!

That is totally awesome!

Thanks Jamely. Just to clarify, the sounder is a fully functional scale model. The only thing I substituted was an off-the-shelf electromagnet inside the “coil”. The rest of the components are functional.

Wow the wood treated to look like metal is incredibly realistic! What a cool build!

Congratulation @johnj on another stunning display piece for the Spark Museum!

You did such an excellent job that at first I thought the original was the larger item, and the replica the scale model. I had to read twice to realize which was the original and which the replica, as both look museum worthy material.

This looks so incredible. I had a girlfriend when I was in the army and she was a 05H Morse intercept operator. I remember one night at work she was copying something (intercepting) and her fingers were flying! Turns out, it was automatic Morse code and for about 5 minutes she stayed up with it and hit 35-40 groups per minute.

That’s amazing. I think if this beast ran that fast it would shake the building apart!

I’m not far away, but I don’t visit the Museum as often as I’d like. Last time I was there was with my wife for one of the live radio broadcasts, it was a ton of fun!

Knew it would be your post when I saw the title. Very cool!