Glowforge has some cool designs coming soon to the catalog but here is a sneak peak at two where I did a little bit of a twist on them. All the designs are really cool and I know they will be fun to make. These two stood out to me because of the opportunities to build on them.

Mid Century Rambler
This one is really cool and I did make a tweak to its design file to include some dogs in the houses window. Yes, there is a dog on the table but thats because my beagle would certainly be there. The backplane was also supposed to be clear but I had a plan… 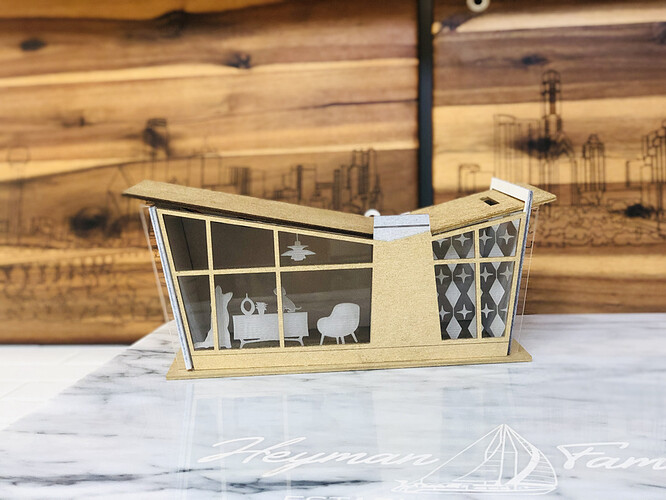 And this was my plan…I put my Adafruit CircuitPlayground Express on the lid: 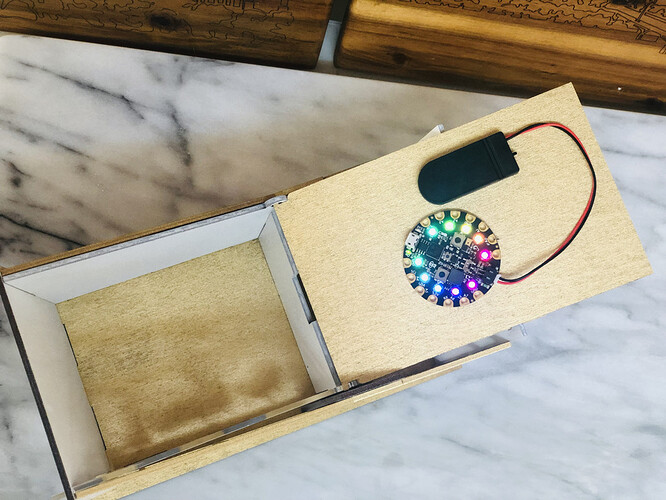 The possibilities with this board feels endless. I use a velcro adhesive for it so I can get it back. This board is what is behind any of my sewing creations that use have fun lights and effects. For the house right now it just is giving some cool lighting 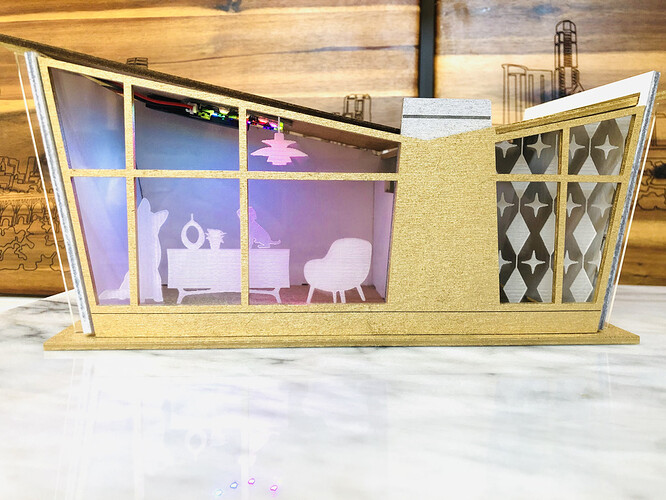 Zen Garden
Well this next one was supposed to be a zen garden and I trust it could be a really good one…but I didn’t have any sand and I live in the middle of nowhere and so getting sand is not really convenient. So I decided to make use of what I happen to have around and I turned it into a dog park. 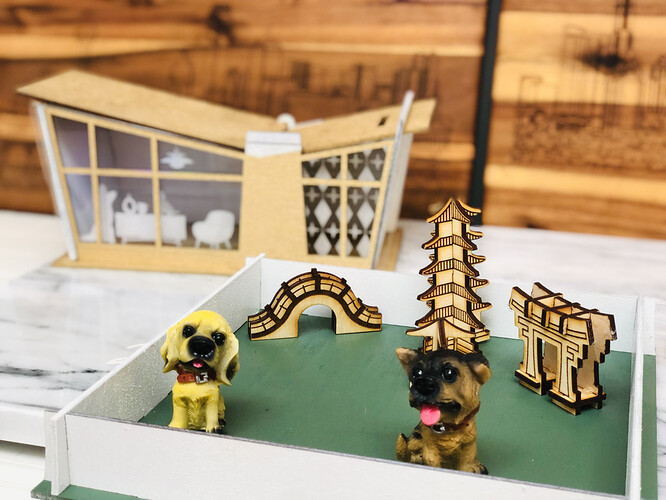 What is cool is that I used magnets (they are neo mags and I do not put these in my GF) and I glued one to the bottom of the dogs so that I can use a second under the garden and be able to move around the dog.

Look out for these designs in their intended state coming soon

Love! I would hardly take any effort at all to turn that Mid-Century Rambler into a creche/nativity scene!

That is a really cool idea! I love the possibilities!

These look like a lot of fun! Love the magnet under the dog:-)

Wow, I remember seeing that style of roofline when I was young. There was even a drive-in hamburger joint with a similar style. Ah, nostalgia!

Does the room with the privacy screen double as a bank? Or does that slot have a different function?

I actually have not figured that one out. This was my first time doing a catalog design.

Am I missing something? I’m not seeing the zen garden in the catalog. I’ve had the mid-century rambler for over a month when I accidentally stumbled on it in the back of the catalog. But I don’t see the gift guide or the zen garden any where. But I’ve been seeing it all over Instagram

These are not out yet, but will be soon! The #giftingwithglowforge on IG will show some sneak peeks.

It’s also on Facebook in the GUG. A guy was going on about having early access? I don’t get it. Not a sneak peak anymore…the word AND the design are out.

LOve the use of the LEDs! Mixed media is cool!

the word AND the design are out.

The designs are not out yet but will be soon. It’s a lot of cool stuff but the zen garden and rambler was all I was able to get to so far.

As for the word being out, I believe that was the intent of the marketing campaign. The term of sneak peek is just inline with the campaign I think it was successful at least on IG. I posted to the forums how I added in flare on mine because makers were wanting to know and be able to do the same when they get them.

Well, color me confused then. This is what I saw…the designs must be out in some manner for people to be able to make them, in addition to yourself. 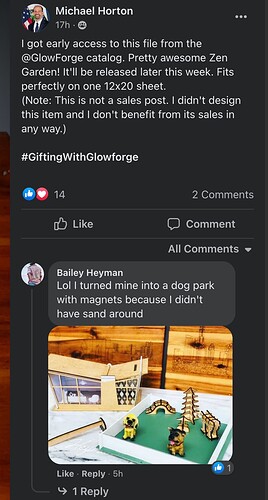 Yes, a set of creators were given them to make them and promote on social media. That way glowforge can have photos to post ahead of the release to get people excited. 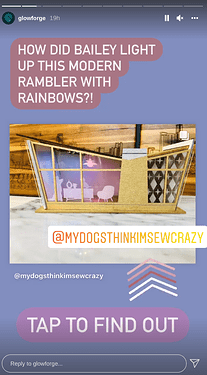 I believe that person on facebook is Partyof4Crafts on IG and they also did great with their makes and getting people excited about them.

Got to love the world of social media and marketing lol.

Ah…OK…I get it now. Thanks

I made the rambler house out of walnut plywood, but I’ve hit a snag. I think the tiny acrylic circles that fit onto the small arms on the larger roof piece are supposed to rotate inside the holes at the top of the acrylic walls (to allow the roof to pivot open and closed). Is that correct? Mine did not rotate and the small arms of the plywood broke off. I’m wondering if I somehow changed the size of the little circles or what might be wrong. Any thoughts?

That’s totally possible - also acrylic can have a natural variation so it’s possible yours was a touch thicker so your kerf was a touch tighter. If you can cut it again I’d suggest running the cut twice on the acrylic which will take off a tiny bit more material - and if you have the roof already cut you can pop the acrylic in - see if it turns easily - and if it doesn’t, put it back in and run that cut a 3rd time.

@CMadok might have better insight. I didn’t realize it was a piggy bank until she pointed it out

I ended up editing the part so that I and run wires along the inside of the roof and I didn’t use those circles.

Thank you both for the input. I’ve run out of both frosted acrylic and the walnut plywood, so I sanded down the little circles and glued them onto the sides of the lid where the little arms used to be. Hopefully they will hold. The lid now moves freely.

And a few more, including a customized “dinosaur-a-menorah” 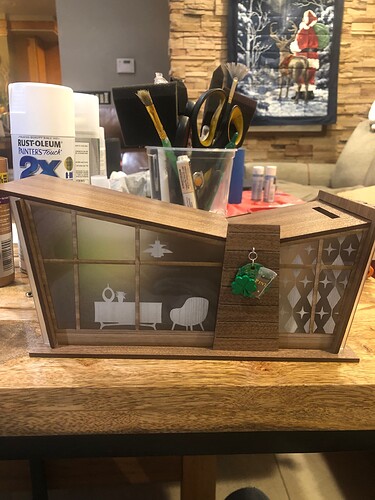 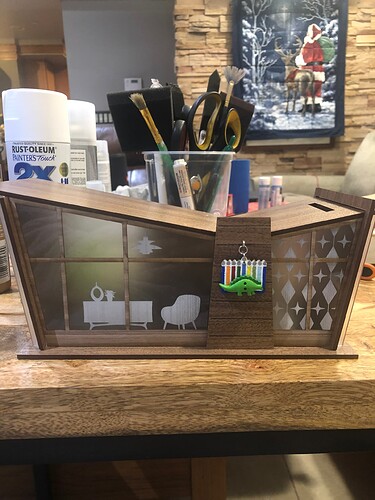 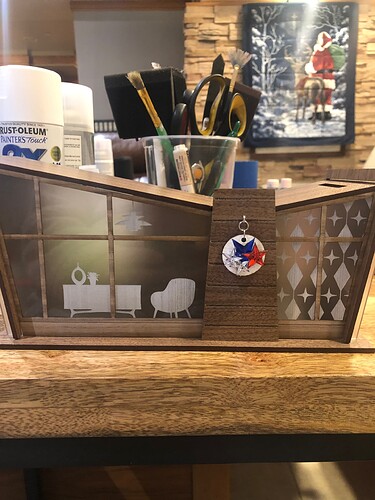 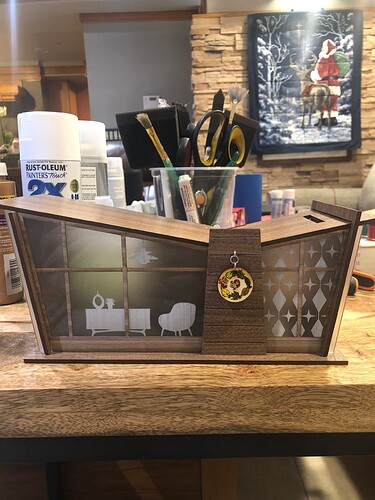 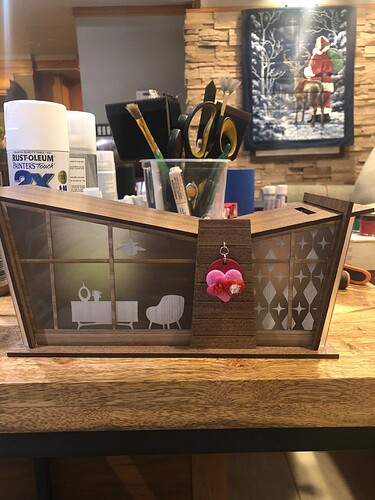 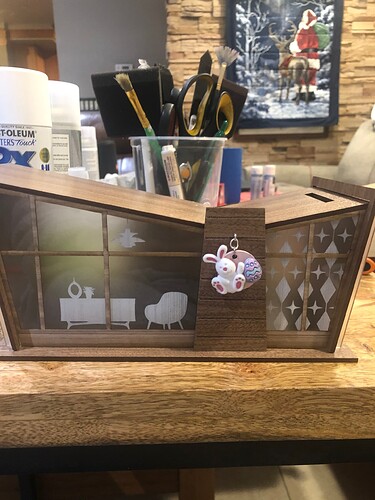 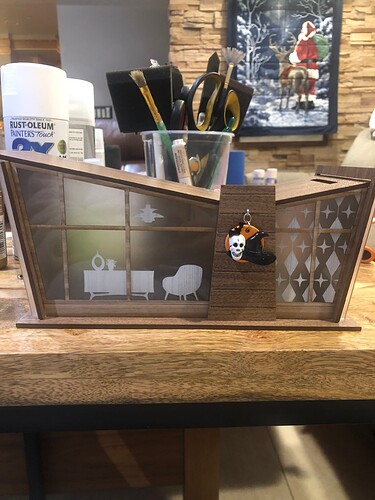 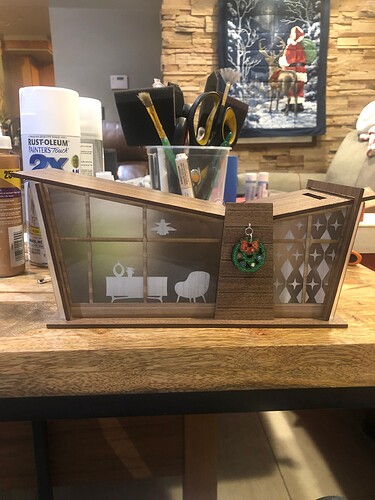