Glowforge on a sailboat?

So, we are going to forego our lives on land and circumnavigate the Earth on our sailboat.

I would like to take the forge… but man there are a lot of concerns. As if salty air, internet access, and space weren’t enough to worry about, there’s the movement. That’s what this post is about.

How detrimental to prints is it if the machine is rocking a bit? I assume rocking front to back would be less detrimental than side to side, but just how bad are we talking?

What if the machine isn’t level? Because it won’t be… hardly ever.

This is a new one. I can’t wait to see the replies! I do think a “flat” surface (sturdy, with no hills/valleys) is more important than “level” but that’s all I’ve got here.

Also really intrigued about your journey. Hope you’ll share along the way!

I too am intrigued about your journey, so also hope you will post about it for all of us landlubbers. I can’t even imagine that it would be possible to use the GF on a ‘surface’ that’s rolling and pitching on open water. Could be one of the many things that I don’t know about, too. Someone more knowledgeable will likely give you a better answer. Bon Voyage!

Just saying what a wonderful adventure! I’m thinking you may need to ‘hold down’ whatever you’re cutting to prevent it from moving, but i would think if it’s not significantly rocking, that having it on the flat surface like @ChristyM mentioned would be more important. Totally based on opinion and not science

Let us know how it goes!!

Don’t have to worry about the neighbors being bothered by the exhaust.

Grew up on the Chesapeake Bay where the waves are far less than the ocean. But unless your name is Musk or Bezos any sailboat will occasionally see very significant rocking and rolling. Whereas I agree that being flat is far more important than being level I can’t imagine a sailboat is a good place for a GF. Sitting in a harbor on an average day, sure. But even when off you would need to tie down the gantry and head while sailing. Yep, salt air is bad, venting will require significant thought. There is a reason the U.S. Navy spends so much on corrosion control for their carrier based aircraft. GF the company spent zero.
Material warp could be an issue. Overtemp issues are likely unless you have A/C.

Maybe make a gimbal table for the glowforge before you go? Sounds like a fun project.

I’d definitely ask Glowforge for their opinion, maybe you’ll get a sponsorship out of it.

I knew some folks with a 50’ trimaran that might have managed to get away with it in port, and another with a 60’ LWL Baltic Fisherman. But they had made the same mistake as many of expecting some similar living volume as one expects in a house or even RV.

the neighbors being bothered by the exhaust.

In port with access to 110 v electric your neighbor will be 3’ away and even a generator exhaust could start a fight. and anchored off it would take a sizable generator and smooth anchorage to have even a hope, Underway it would need to be packed on the inside at least as if for shipping to keep it from damaging itself, And that much space even for the empty box would be ridiculous. That is to say nothing of salt air, keeping materials unwarped, much less space for them and all the stuff needed after for finishing the work.

A big Drift-r-cruize on a river or lake, and you might get away with it. Otherwise, a no, or even a hell no! would be quite insufficient but perhaps an OMG might come close.

Just an uneducated observation, when it is on, the head stays still / is less likely to move, when it is off it can move freely. So I would say if you can’t build a table out of gyroscopes, then when it is off I would prepare the head as though it were being shipped.

Have an amazing trip!!!

Got to thinking… I have noticed in the P&S section of this forum that when a Glowforge printer fails the frantic customer invariably claims to own a boat anchor. Please let us know if it is actually suitable for such a thing.

to forego our lives on land and circumnavigate the Earth on our sailboat.

I have known many (including myself ) with that Idea, but I would suggest putting everything in storage and just plan for a year in the Miami-Bahamas area first. Just hanging out with with such folks will get you a thousand accounts of the joys and freak-outs others have encountered. More than a different universe it is a different mind that is needed and until you start you can have no idea.

Level isn’t so much of an issue (within reasonable limits) as FLAT. But some of those other factors, especially the salt air and humidity, would concern me. I have a friend who (with her husband) sailed from OR to HI, and she said everything was wet, every single day; they didn’t have a stitch of dry clothing, towels, etc. It doesn’t sound like a very good environment for a laser cutter, unfortunately.

I wonder if “Starlink” would get you access. Having served aboard a carrier I can attest to the corrosion concern. A saltwater environment is one of the most corrosive as rpegg said.
I envy you in that adventure, and I would probably take mine too. An airtight container such as a Pelican box or equivalent with a rechargeable desiccant would be worth considering I think.
As suggested, that means of locking down the head and gantry will be needed. Either the orange shipping hardware or something as simple as a foam cushion big enough to fill the bed area and hold the gantry and head in position.

Please do share your journey with us who can only dream of that freedom, with or without your laser.

If you have a very good WiFi and you print when it is very calm & not during a Hurricane. I would say give it a shot. I think I would be concerned about the salt in the air from the water. But who is to say except someone who has already done this. Good luck either way.

If you have basic sailing skills, I would suggest finding family that could move in and manage your present life. or put in storage and try a bareboat charter somewhere with reasonable weather. Southern Florida has large areas of shallow reasonably smooth waters, but shallow can be an issue as well. However bareboat in Hawaii or the Virgin Islands could also give you a taste, with the ability to go back if you are not up for it.

When I sold my house I thought it an excellent time to go for it but found that all the proper boats I found were being sold by men my own age who’s bodies could no longer handle the rigors of their life and desperate to sell their boats. There was a beautiful 50’ trimaran set up for single handing that started at 150k and finally sold for 45k before I could manage the particulars. I was very sorry at the time but relieved now as I understand those issues, and now being in a power chair know that would never have worked out. So if you are doing it, do it while you are young and still have a body that is capable of doing it.

In any case, I am sure we would all love to hear of your adventures

Currently “Starlink” is locked to a physical address. Move more than a mile or so from that address and you won’t get signal. However they have announced that possibly by this fall that it would be possible to travel with the Starlink.

SO looking forward to hearing about this life onboard

I wonder if finding a coastal family to foster your

so you can design to your heart’s content on board, and then upload the designs to the dashboard where they could hit print - then have the prints waiting for you in the next port…or if it’s really involved foster family they could do the build/QAing as well.

“Lasers and sail boats don’t go together” I thought. Then remembered that I learned to sail in a Laser. 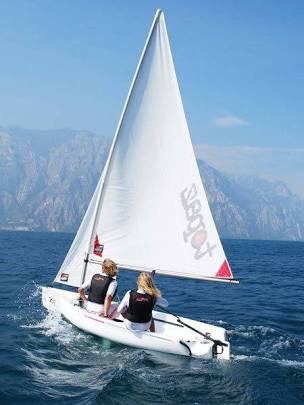 Space might be a concern, but the name is right!