Uh what? Is there a purpose to this or just garden variety pyromancy?

Uh what? Is there a purpose to this or just garden variety pyromancy?

Ever seen any videos from Burning Man?

Last January I attended a workshop called “Fire effects for the artist.” This particular poofer is just a basic design. I wanted to put one together from scratch to better understand the process. Now I’m ready to make some hot art.

Last spring I started working on a piece that is just a free burn (similar to the pilot fire you see in the video.) It will be three sunflowers made out of copper. The heads will be an open fire - not a poofer.

For reference, the pilot fire is about 7 feet off the ground. Want it above head height. The flame extends about 10 feet above that. In the video it is running at 20 psi but can go to 100.

Then again is garden variety pyromancy so bad?

Eventually I hope to make something much more artistic. Pay no attention to the man behind the curtain.

Everything is in the garage ready to go, so…
Backyard it is.

Yes but the poofer won’t get stale.

I’m actually heading to Wyoming this week for a micro burn with about a dozen camp mates. We are also working on an inverted fire bowl you can sit under and watch but that doesn’t have any GF connections.

I did build a mini man. I cut the head panels on the GF. I also used it to make templates for the ribs and rings used in the arms and legs. He made the trip to Wyoming this week. 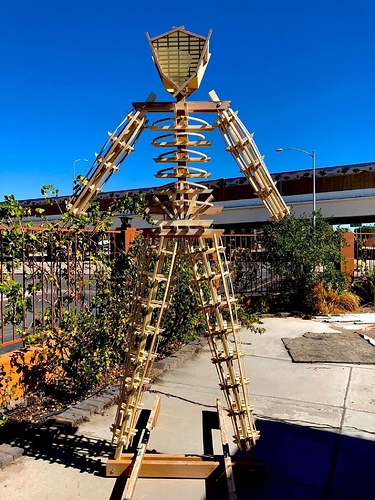 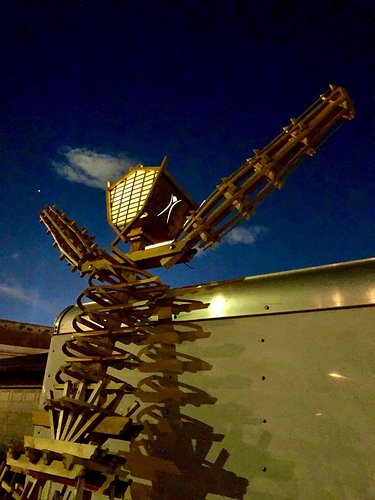 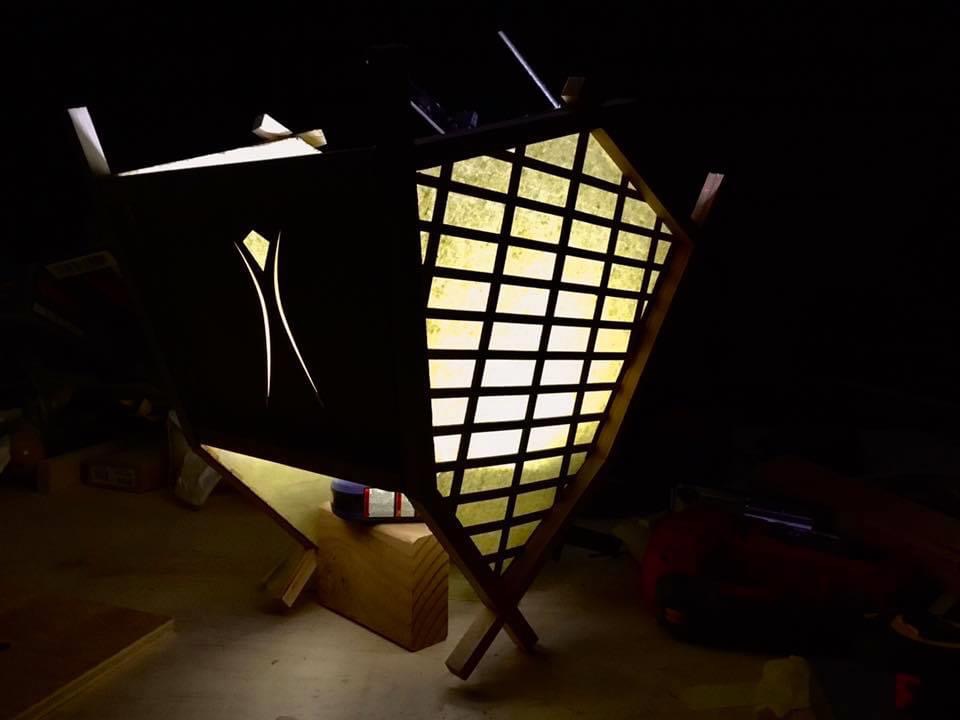 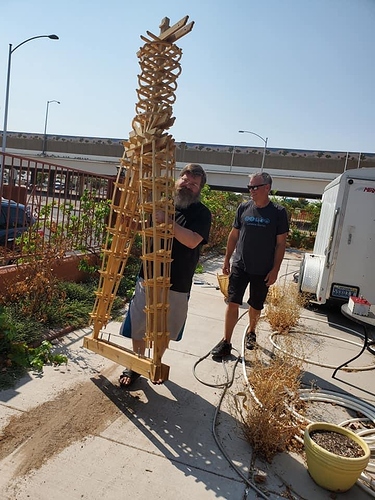 I also made some camp swag to give out to everybody. 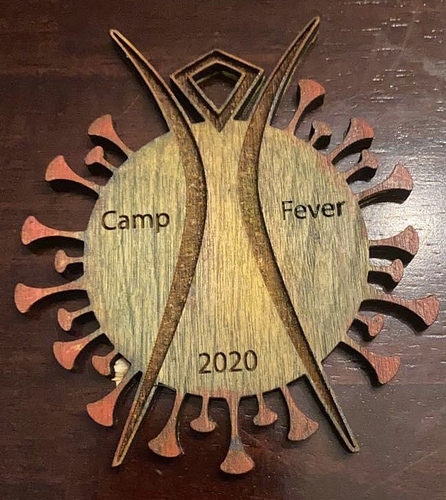 I love incorporating the GF into projects. It lets me focus on the art instead of the production.

Even though Burning Man was canceled they will still be doing virtual burns all week. The events kick off tomorrow.

This year’s theme was The Multiverse. Building on that they have setup several virtual worlds where people have been building art and camps over the past few months.

I am definitely not doing enough with fire.

The man is up. 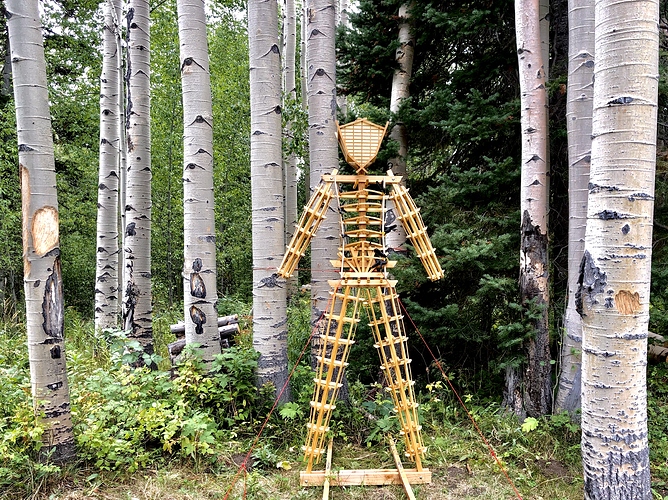 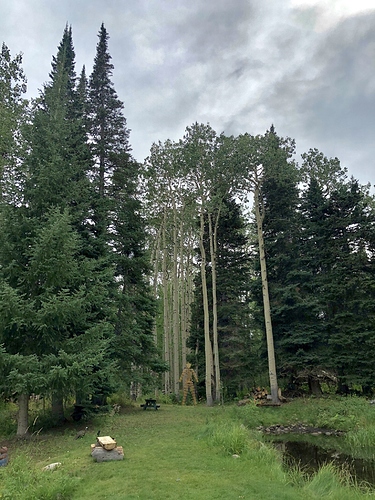 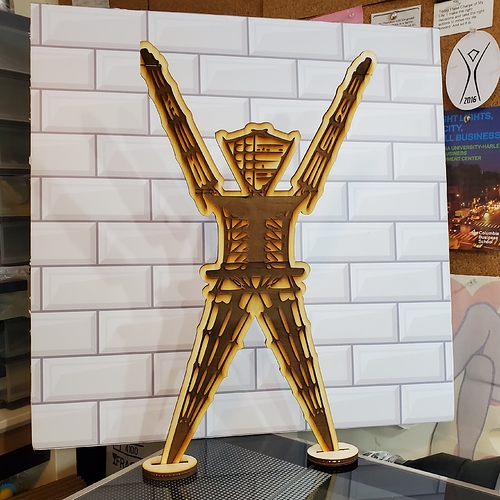 Yours is beautiful and much bigger than mine. Have a good burn. Safety third.

What are the first and second Burner rules?

What are the first and second Burner rules

Go out on a limb here and suggest the top line rules are:

Everyone participates equally, (do not judge).

They go to extreme length for safety, so no reason to knock it off #1.

Safety third is just a fun thing to say and not a general principle.

We had a great burn. On the weekend we had about 20 people attend on a 16 acre site. Everybody that had a clear PCR test for COVID in the last week had one wristband. Everybody in attendance did an onsite antibody test that tested for current and past infections. When people arrived the first thing they had to do was take the test, this was not negotiable. The results took ten minutes. Once tested they received a different wristband. Those of use that were there all week tested twice mid week and again on Saturday. This was the first gathering I have been to since March and I felt very comfortable about the process.

Anyway, enough about COVID. For our small gathering we had a temple space for classes and workshops. Some of these were done over Zoom with people offsite. There were three bars setup for a pub crawl. I did a whiskey bar with about 16 selections. I built my first poofer because fire! The poofer was setup near the whiskey bar and people got a chance to fire it after selecting their whiskey of choice. Even though it wasn’t built into any nice art piece people still loved it. Many in attendance had never seen anything like it. Myself and another collaborated on a fire ceiling that far exceeded expectations.

Everybody loved the Camp Fever tokens. The man stood tall among the aspens during the week. 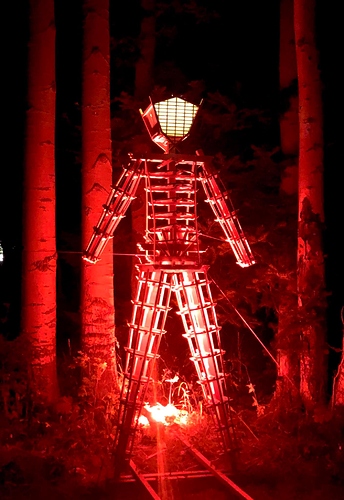 On Saturday we had a waxing ritual. Before I built this man I had no idea they waxed the big man. It basically makes him into a giant candle and provides fuel so that it burns completely. We probably used a pound or so of soy wax. 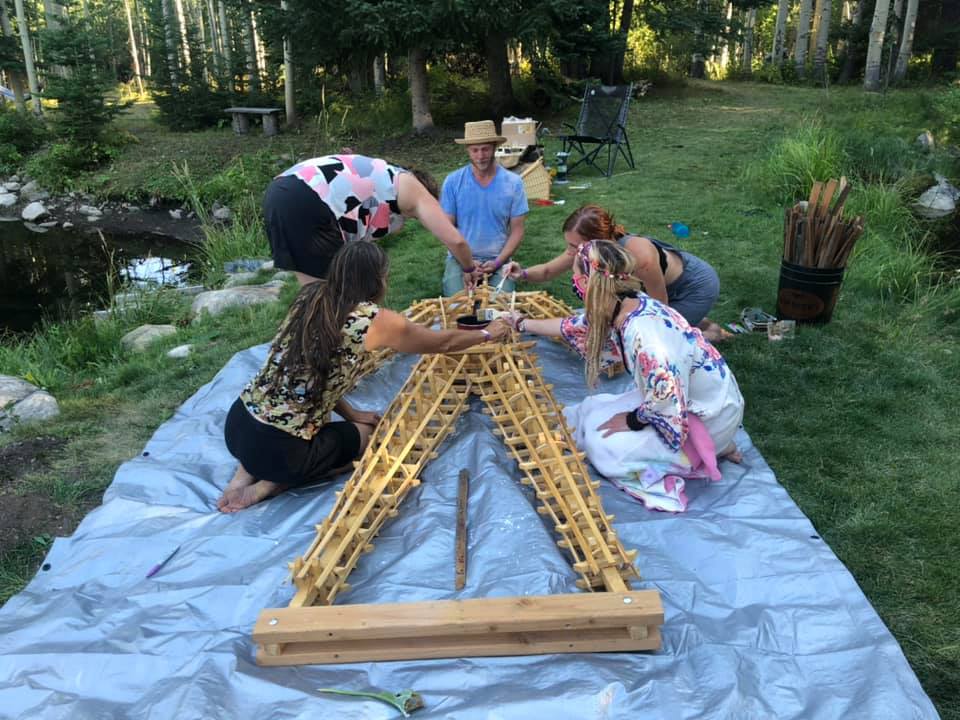 After waxing he moved to a small pond for the actual burn. 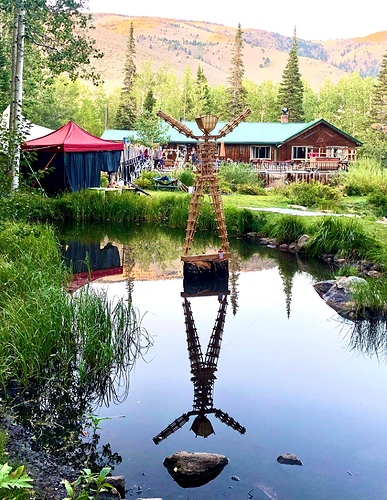 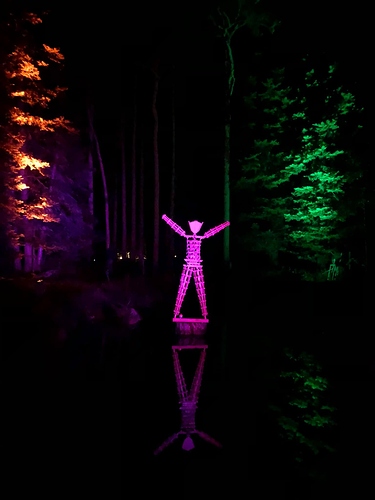 While this wasn’t the big burn I found it just as satisfying.

Some of the people were burners, some of them are part of ISTA (International School of Temple Arts), some were both and some had never done either. ISTA was new to me and made for some interesting workshops.

Yours is beautiful and much bigger than mine. Have a good burn. Safety third.

I love it! Hope you had a good burn.

That sounds like an amazing event. Your man looks amazing. Had no idea about the wax after 12 times going. Ha. Mine needed no wax as it went up fast. Next time ill add some profile layers and maybe a 2nd side. Would love to see urs burn over that water. Must have been spectacular. I’d also love to see that fire ceiling. Have spent many a night on my back underneath one looking up on the playa. And I agree that while not the full event there was some satisfaction taking part in our very own little piece of the burn. Thanks for sharing.

I had to review the video. There was one burner that wanted to do a “traditional” naked lap around the Man.

EDIT: You miss the first minute or two since I was the one in the water lighting the Man. I was holding the phone in one hand and clicking the DSLR with the other. I’m not sure why the audio cuts in and out. I suspect my hand was sometimes covering the mic. The noise you hear in the background is one of the two streams on the property. This was good because we had a pump and fire hose on hand just in case.

The welder went way overboard on the design. Some of the materials Like the pipe were free scrap So we didn’t complain. It can probably withstand a small nuke. It was supposed to be mobile but is now permanently installed in Wyoming.

Partially raised so we could do the plumbing. 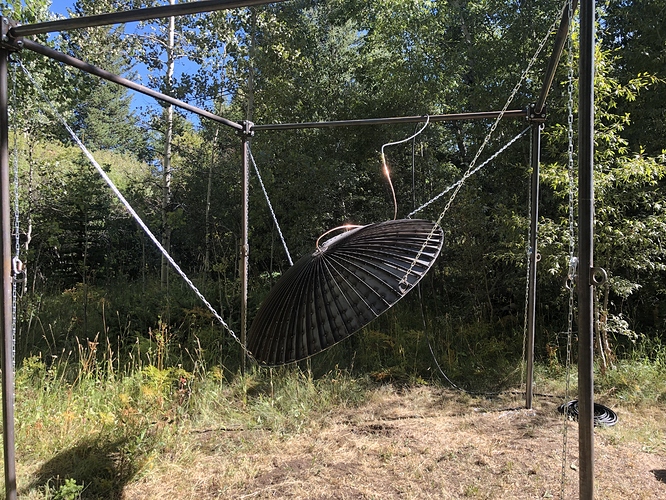 Some local non-burners got into action helping use hoist it into place. We may have created some new burners in the process. 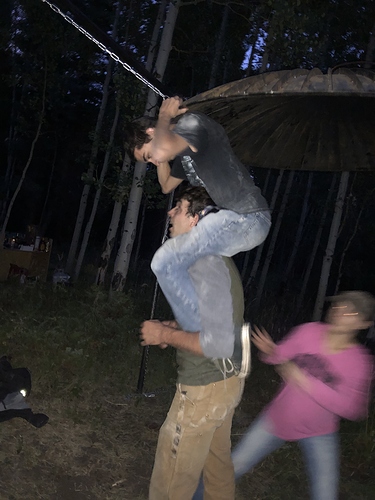 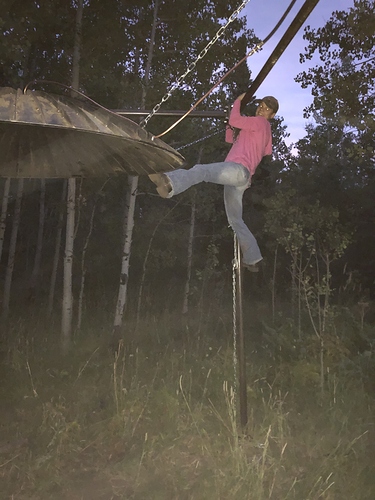 A first run. The flame shoots down about six inches from the plumbing.

EDIT: I’m not sure why this isn’t showing up on my laptop but it plays on the phone OK.

The next day a diffuser was added below the plumbing.

EDIT: This starts out at normal speed then switches to slow motion.

Next time ill add some profile layers and maybe a 2nd side.

Your Man reminds me of the tokens I made for last year’s burn. Check them out in this post. The traditional Man is on the front with alien eyes and on the back is the swoosh Man in a Naruto run.

The Glowforge makes great projects easy. I’m sure your Man will grow and evolve.

Your man burn is awesome especially in the water for a great reflection burn. Two for the price of one. I couldn’t get the first fire ceiling video to work but the second one is mesmerizing. I could watch that all night long. Thanks for the vids and yayyy on new recruits. It only takes a minute.